Forum List What's new Dark Style Change width
Log in Register
What's new Search
Menu
Log in
Register
Navigation
Install the app
More options
Dark Style
Close Menu
Posted on August 10, 2020 by Todd Erwin
You are using an out of date browser. It may not display this or other websites correctly.
You should upgrade or use an alternative browser.
Predictably entertaining 4 Stars

Grace Davis (Tracee Ellis Ross) is an aging pop diva, coasting on the success of her back catalog through re-issues and concert appearances, living the high life despite not having released an album of original material in years. Grace is on the cusp of releasing a “greatest hits” live album as she and her career-long manager Jack (Ice Cube) actively look for a producer to bring the live recordings a “fresh” sound. Grace’s personal assistant, Maggie (Dakota Johnson), desperately wants to produce that album, secretly mixing tracks on her laptop during every spare moment she has. Maggie reveals to Grace and Jack what she’s been up to during an interview with a prospective producer, a scene that becomes uncomfortable for all involved due to Maggie’s naïveté. But Grace likes what she hears, and agrees to use Maggie’s mix and give her credit, but without pay, as both Grace and Jack explain to her that she has to work her way up the ladder by seeking out her own clients to truly earn that credit. While grocery shopping one afternoon, she runs into David (Kelvin Harrison, Jr.), a singer-songwriter performing at local coffee houses and clubs. Passing herself off as an accomplished producer, David agrees to let her reshape his sound and record a demo album, an in doing so, the two fall in love. Meanwhile, Grace is wanting an opening act for the release party for her live album, and Maggie sees this as her chance to break out by booking David to open the party. Things do not go as planned, and Maggie finds herself without a job and without a client, hiding out on Catalina Island with her disc jockey father, Max (Bill Pullman). Can Maggie get her life back together?

I found much of The High Note to be rather predictable – you know Maggie is going to eventually get her break, and I saw the big reveal at the end of the second act coming a mile away. Yet it is still highly entertaining, thanks to the strong performances by the entire cast. Ice Cube is terrific as the manager who too often is looking out for himself rather than his client. Tracee Ellis Ross plays Grace to perfection, channeling many pop divas we have come to love and hate over the years without going completely over the top. Dakota Johnson is sweet and it is both her naïveté and spunky determination that makes her character so convincing. Supporting players Bill Pullman (who is always excellent), Zoe Chao (as Maggie’s roommate Katie), Eugene Cordero (as Maggie’s mixer friend Seth), and June Diane Raphael (as Grace’s house manager Gail) round out the excellent cast. The film unfortunately bypassed its originally planned theatrical release due to the COVID-19 pandemic and was released with limited promotion to VOD at the end of May. That’s a shame, because this had the potential of becoming a sleeper hit.

The High Note was captured at 6.5K resolution on Arri Alexa 65 cameras and completed as a 4K digital intermediate. Universal has released the film on Blu-ray and DVD (it is available in 4K UHD with HDR on digital platforms – more on that below in the audio section). As with the majority of Universal’s new Blu-ray releases, this one is another winner in the image department. Colors really pop where they need to (especially during the concert footage and music montages), yet never appear over-saturated. Detail is also excellent, from the intricate textures of the costumes to the sometimes obvious process shots. Contrast excels, too, with deep inky blacks with strong shadow detail and bright whites that never appear to clip.

The High Note was mixed in Dolby Atmos, and both Vudu and Apple TV offer the digital 4K versions with an Atmos track. For some reason, Universal has gone against their usual policy of including the Dolby Atmos track on this Blu-ray release. In its place, Universal has provided a still very good DTS-HD MA 7.1 track that sounds very similar but lacks any overhead immersion. This is a music-driven film and makes excellent use of all 7.1 channels to immerse the viewer in the concerts and recording sessions. LFE is solid, especially during the concert sequences. Dialogue remains clear and understandable throughout.

The Dream Team: Inside the Creation of “The High Note” (1080p; 5:16): Fairly standard EPK behind the scenes look at the making of the film.

Making a Legend: The Grace Davis Story (1080p; 4:04): Mockumentary on the life of Grace Davis, featuring interviews with the cast in character.

Digital Copy: An insert contains a code to redeem a digital copy in HD on Movies Anywhere. The good news is that the HD version on the Apple TV app (on both Apple TV and Roku) offer audio in Dolby Atmos.

Despite its predictable storyline and plot devices, The High Note remains a very entertaining film. Definitely worth at least a rental.

Thanks but I’ll wait for Netflix rather than renting based upon this review.

noel aguirre said:
Thanks but I’ll wait for Netflix rather than renting based upon this review.
Click to expand...

This will likely show up on Peacock before it shows up on Netflix or Prime (if ever).

Todd Erwin said:
This will likely show up on Peacock before it shows up on Netflix or Prime (if ever).
Click to expand...

Then I’ll look for it on Bravo with commercials in a year.
You must log in or register to reply here. 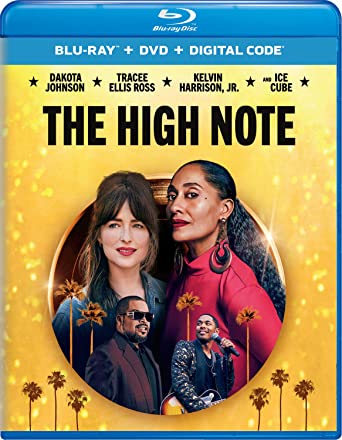