By the end of the 1940’s, William Wyler had firmly established himself as one of the best directors working in Hollywood; his Oscar winning efforts in both Mrs. Miniver (1942) and The Best Years of Our Lives (1946) certainly helped cement that status. Another effort coming in at the end of the decade, The Heiress, further solidified him as a master director with a great command. Previously released by Universal on DVD, Criterion has licensed the film for their collection and given the movie its Blu-ray debut.

In mid 19th Century New York City, Catherine Sloper (Olivia de Havilland) is a shy and reserved young woman living with her father, Dr. Austin Sloper (Ralph Richardson). During a social gathering for her cousin’s upcoming wedding, she meets the handsome Morris Townsend (Montgomery Clift) and begins to fall in love with him after a brief courtship. However, Dr. Sloper begins to suspect that Morris’ motives for courting Catherine aren’t in the purest of interests but Catherine believes that’s not the case. One fateful night will change the course of Catherine’s life forever…

In a career filled with many highlights, William Wyler’s The Heiress stands out as a prime example of how human emotions can be just as riveting as a good Hitchcock thriller. By keeping the main reason for the initial courtship between Morris and Catherine ambiguous, Wyler manages to generate suspense over how the relationship will turn out, especially when hints emerge that the intentions might not be as wholesome as it may appear. Another big plus is the sumptuous production design, drawing us into this world where a facade may not tell us the whole story. Finally, the decision to end the film on a very un-Hollywood way further demonstrates of how human emotions and passions can be interpreted or misinterpreted, leaving one to wonder if Catherine made the right choice after all. All of these elements are clear proof of a filmmaker working at the top of his game.

Olivia de Havilland gives one of the greatest performances of her career as Catherine Sloper; her brilliant turn from shy innocent into a hardened cynic netted her the second (and very well deserved) of two Oscars she would win in her career. In a part that helped to further solidify his leading man status, Montgomery Clift makes for a dashing and comprehensive Morris; Ralph Richardson makes a memorable impression as the emotionally lacerating Dr. Sloper, a man who can’t see past the unreasonably high standards her has set for his daughter. Miriam Hopkins is a scene stealer as the old fashioned romantic Aunt Lavinia; it stands out as one of the best performances of her career. Other notable appearances include Vanessa Brown as the Sloper’s maid, Mona Freeman as a cousin of Catherine’s, Ray Collins and Selena Royle as Catherine’s relatives whose daughter’s engagement party serves as the catalyst for Morris and Catherine’s own courtship, Betty Linley as Morris’ sister who reveals some secrets from her brother’s past, an uncredited Franklyn Farnum as a colleague of Dr. Sloper’s, and an uncredited Douglas Spencer as the minister.

The film’s original 1:37:1 aspect ratio is intact in this brand new 4K transfer for this release. Film grain is intact and organic throughout; fine details and gray scale are given a faithful rendering. There’s minimal instances of age related issues like print damage, scratches, dirt, and dust, which makes this transfer an improvement over the Universal DVD and likely the best the film will ever look on home video.

The film’s original mono soundtrack is presented on a 1.0 PCM track for this release. Dialogue is strong and clear with great fidelity given to Aaron Copland’s magnificent score and the sound design. There’s nearly no instances of age related issues with this track, which makes this the best the movie has and likely will ever sound on home video.

A conversation with Jay Cocks & Farran Smith Nehme (22:46) – The screenwriter and film critic talk about the movie and draw a few parallels to Martin Scorsese’s The Age of Innocence, a film which could be a spiritual cousin to this movie.

A program on the film’s costumes with Larry McQueen (15:00) – In this new program, the costume historian and collector goes over Edith Head’s work on the movie and shows one of the costumes from the film from his personal collection.

The Costume Designer short (8:58) – This recently restored short from 1950 goes over the process of designing costumes for the movies, featuring the famed Edith Head.

Olivia de Havilland on The Paul Ryan Show (44:59) – In this two part interview from 1986, the actress talks about her career as well as her time working on the movie.

William Wyler on The Merv Griffin Show (16:41) – A couple of excerpt from the 1973 tribute to the director, featuring appearances by Wyler, actor Walter Pidgeon, and actresses Bette Davis and Olivia de Havilland.

Salute to William Wyler (5:35) – The director’s acceptance speech for the AFI’s Lifetime Achievement Award is presented in this excerpt from 1976.

Ralph Richardson interview (7:09) – The actor talks about his time working on the movie in this excerpt from the 1981 documentary Directed by William Wyler.

Fold out with an essay by Pamela Hutchinson

Not carried over from Universal’s DVD is a brief introduction to the film by TCM host Robert Osborne.

A tour de force for both its star and director, The Heiress remains a spectacular example of Hollywood filmmaking and storytelling at its prime. Criterion has done a tremendous job of giving the film a great presentation with an equally great set of special features diving into the film and its many layers. Highly recommended and worth upgrading from the previous Universal DVD. 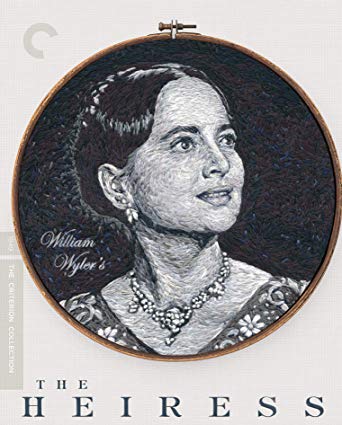