The Hate U Give is a very good film; relevant, emotionally resonant, with impactful and intimate performances. It explores two deep subjects in tandem, the shooting of unarmed black people by the police, and the reality (and often duality) of being black in America as seen through the eyes of a young girl. As effective as it can be at times, a deeper conversation yearns to be had. The Hate U Give is a well-directed, handsomely produced, and effectively told statement that should become part of that deeper conversation. Recommended!

“Know your rights. Know your worth.”

Starr Carter exists in two worlds. She’s a smart, thoughtful young black girl, with a loving family in a poorer part of the city where family is everything. She’s also a student at an affluent, mostly white school where her school friends don’t know the whole Starr. At home, she can be her full and whole self, but at school, she is selective. She doesn’t share the details of her life. She talks and acts differently to ‘fit in’ and not stand out. It’s a balance to which she has become accustomed. Her worlds collide when she is witness to the shooting of her close childhood friend, a young black man, shot and killed by a white police officer following a traffic stop. As an unnamed witness, she has the option to testify before a grand jury, but it will come with risks. Feeling the suspicious eyes of local law enforcement, the pressure of the local drug gang who are worried she may implicate them, the weight of withholding her trauma from her white school friends, and the welling anger at the killing of her unarmed childhood friend, Starr must find her way through the tragedy and find her voice.

Based on author Angie Thomas’ book of the same name published just the year before (itself an expansion of a short story Thomas wrote in college following the shooting of Oscar Grant), The Hate U Give is a story for our time. As the film opens, we see the patriarch of the Carter family, Maverick (played by Russell Hornsby) giving a talk common in many black households; the talk to Starr (Amandla Stenberg), her brother, Seven (Lamar Johnson), and young baby brother Sekani (TJ Wright) about how to be and act when, not if, the police pull you over. That somber conversation is a necessity born of generations of experience where people of color are pulled over at alarmingly higher rates compared to whites, and where the treatment by officers of the law is found to be far harsher. In the Carter household, the conversation is a moment of reality and a means to try to help his children survive an encounter and a moment that will define Starr’s life.

The Hate U Give is more dramatic than gritty. In many ways, the film views the sensitive subject through the lens of a coming of age story, one with a powerful evolution of the lead, Starr, played with powerful expressions and of rage and range of emotion by Amandla Stenberg. She is earnest and entirely believable as the harshness of an unjust world crashes down on her. This is Starr’s story, informed and supported by a strong supporting cast. Regina Hall’s Lisa Carter, a protective mother, is pragmatic and relatable, Anthony Mackie’s King, a neighborhood gang leader, is subversively menacing as the uncle-like figure whose priorities come to be adversarial to the Carter family when he feels threatened by what Starr may say. Issa Rae’s April Ofrah, activist and voice of reality and reason for working to fight against injustice, is an important factor in Starr’s evolution. Algee Smith as Khalil, the young man shot and killed by police, features in a limited but important way in the story and he’s immediately likeable. And Common stars as Carlos, a family member and officer of the police department where the cop who killed Kahlil works, is excellent as always. His Carlos character is used to explore the conversation over police shootings from a different angle. In addition, Lamar Johnson’s Seven, half-brother to Starr, is strong and vulnerable in equal parts.

The remaining cast, including Starr’s school friends, (Sabrina Carpenter as Hailey, Megan Lawless as Maya, and K.J. Apa as Starr’s white boyfriend,) are loosely drawn but effective. Besides Amandla Stenberg’s Starr, the standout performance here is given by Russell Hornsby. A likable actor, he showcased an endearing and soft strength in his turn as a family man and police officer in ABC Family’s Lincoln Heights, and here, as Maverick, he delivers a more raw and strong performance. Sure, his character is conveniently placed in scenes a few times to inspire or galvanize a point, when he speaks, it’s impossible not to be drawn in.

The Hate U Give is strongest as a passionate examination of the pain and pressure of being black in America, at least as the young Starr experiences it while managing her two selves–her “self” at home and her “self” at the overwhelmingly white school. It is able to dissect reasonably the conversation that America has with itself seemingly every time an unarmed black person is killed by the police. The film gives ground for many of the familiar points and arguments, with Common’s Carlos sharing perspective on the dangers of being in law enforcement and the flaws rampant in how that enforcement is carried it. In the end, Hate lands where I think it should, that any law dispositioned unequally is fundamentally unjust.

Director George Tillman Jr. has crafted a potent drama in The Hate U Give, and while the screenplay by Audrey Wells offers up a few “speeches” here and there, heavier than necessary from time to time, it is hard to not be moved by the raw reality of what those speeches define for us. Viewed as one young girl’s exploration of duality and the realities of injustice in our society, the film is powerful, and the journey to finding that young girl’s voice, compelling.

The Hate U Give on 4K Blu-ray is very good. Strong levels of detail, noticeable in close-ups on characters, with fine contrast levels, excellent black levels and good shadow depth. Where this film shines on the UHD format is the colors (thanks to the HDR10). The cooler, blue colors that sweep over the sequences at the prep school Starr attends stand in noticeable contrast to the warmer and more natural tones used back in her neighborhood. Certainly, these color contrasts are used to explore Starr’s emotional and psychological state in her two distinct environments, and the alternating between the two stand out wonderfully on 4K.

With a solid DTS-HD 7.1 Master Audio track, The Hate U Give is aurally impressive at times. Dustin O’Halloran’s score supports the drama well and the film explores the emotion of the Starr character through moments of audio isolation, almost muting the world around the character and allowing the score to pull us through. It’s effective and delivered nicely. Dialogue is perfectly presented, largely in the center channel, surrounds are used occasionally when the scene allows – the party scene, the street protest and confrontation scenes in particular are presented well.

The only special feature on the 4K disc is the audio commentary, but the included Blu-ray does contain an interesting if light collection of extras that are worth noting.

The just over 15 minutes of extended scenes are interesting, but the most important of the features are “The Talk” and “Code Switching”, both of which provide insight to many who may never have even considered that reality. There was opportunity in the special features to really dig deep into the discussion, the broader discussion on what The Hate U Give examines, though really that demands perhaps an extended documentary approach.

The Hate U Give is a very good film; relevant, emotionally resonant, with impactful and intimate performances. It explores two deep subjects in tandem, the shooting of unarmed black people by the police, and the reality (and often duality) of being black in America as seen through the eyes of a young girl. As effective as it can be at times, a deeper conversation yearns to be had. The Hate U Give is a well-directed, handsomely produced, and effectively told statement that should become part of that deeper conversation. Recommended!

A thoroughly engrossing film; so much better than many of the best film nominees for Oscar. I can't believe it hasn't gotten more attention. I'm a tough critic, but this film had me from frame one. Check it out if you haven't considered it previously.
Reactions: Robert Crawford and Neil Middlemiss
You must log in or register to reply here.
Share:
Facebook Twitter Reddit Pinterest Tumblr WhatsApp Email Link 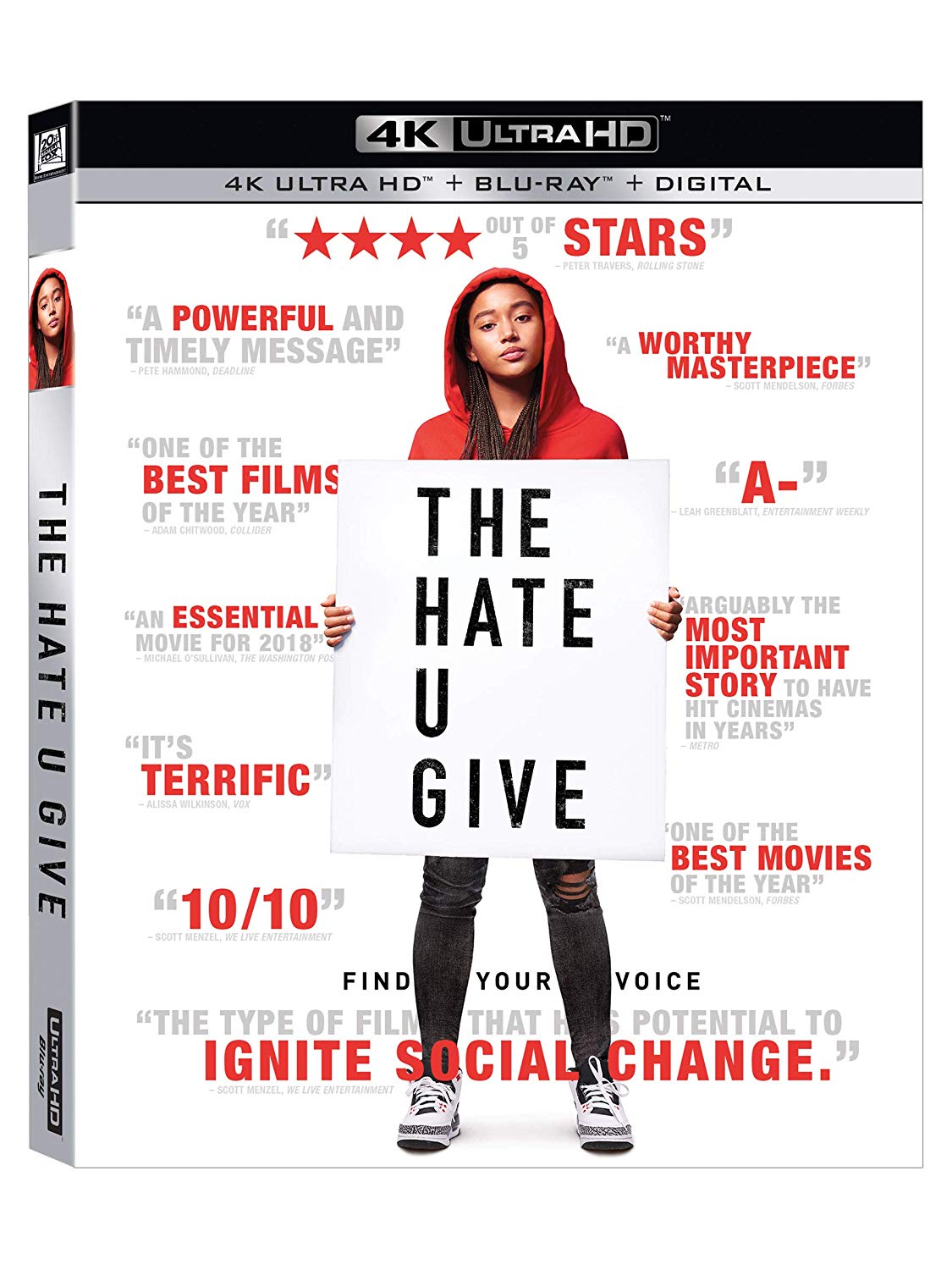