Forum List What's new Dark Style Change width
Log in Register
What's new Search
Menu
Log in
Register
Navigation
Install the app
More options
Dark Style
Close Menu
Posted on December 3, 2018 by Todd Erwin
You are using an out of date browser. It may not display this or other websites correctly.
You should upgrade or use an alternative browser.
So wrong and not the least but funny 2.5 Stars

Someone is killing off the puppet stars of the classic sitcom The Happytime Gang as it is about to go into syndication, meaning the cast would get equal portions of part of the multi-million dollar deal. When one of the cast members happens to be the brother of former police detective turned private detective Phil Philips (performed and voiced by Bill Baretta), he joins up with the former partner that turned him in, Detective Connie Edwards (Melissa McCarthy) to help solve the case.

I can imagine the pitch session for this film – “It’s like Who Framed Roger Rabbit but with Muppets.” Director Brian Henson and writer Todd Berger want this to be a film-noir black comedy, but have a rather uninteresting and not fully developed story to hang their premise on. It doesn’t help, either, that Mitchell Admundsen’s (Odd Thomas, Now you See Me, Wanted) cinematography is often bright and colorful, not really fiotting in with the supposed film-noir characteristics Henson mentions in the commentary track. Like Sausage Party, having characters somewhat familiar to children saying and doing profane things on screen is not funny on its own, at least not enough to carry a feature length film on. And some of the so-called gags go on way too long (the Silly String is a perfect example). I understand that The Happytime Murders was a chance for Brian Henson to distance himself from his famous father, but the attempts at humor are extremely sophomoric and lewd, and their execution often falls flat. The human actors (Melissa McCarthy, Elizabeth Banks, Maya Rudolph, Leslie David Baker, Joel McHale), who all have been funny in previous films, seem to be walking through the sets and never really try that hard at coming up with something clever (or if they did, it was left on the cutting room floor). The only positive thing I can really say about the film is that the puppetry and the seamless blend of CG and real-world puppets in many scenes is a technical achievement.

The Happytime Murders was captured at 8K resolution on Panavision Millenium DXL cameras and completed as a 2K digital intermediate. Universal’s AVC-encoded 1080p transfer is truly spectacular, presenting the film in its original theatrical aspect ratio of 2.40:1. Colors are vivid and well-saturated, with no evidence of banding or bleeding. Detail is excellent, with the most minute hairs and felt textures on the puppets clearly visible, including the scattering debris of stuffing when puppets are shot. Contrast is very good, with bright whites that never clip, and decent black levels that rarely get a chance to get truly inky (although that may have more to do with the source material and how it was lit originally).

The DTS-HD Master Audio 7.1 track is very immersive in its use of surrounds. Sounds of the city, such as helicopters flying overhead and cars driving by, travel seamlessly from front to back and left to right, while Christopher Lennertz’s bluesy score along with select pop songs are spread out among the sound stage. LFE is used effectively to give the score a deeper low end plus add emphasis to punches, gunshots, and explosions.

Audio Commentary with Director Brian Henson and Puppeteer Bill Barretta: The two have a long history of working together, and it definitely shows in their chemistry as they discuss some of the technical challenges in making this film.

Virtual Environments (1080p; 2:15): A look at the use of green screen and CG backgrounds to assist in removing the puppeteers during post production.

Avatar Demo (1080p; 2:45): VFX Supervisor Sam Nicholson discusses and demonstrates the use of CG puppets in some scenes to provide full head-to-toe characters.

Digital Copy: Since The Happytime Murders was released theatrically by STX (and is only distributed on home media by Universal), the package includes a digital copy that can only be redeemed on iTunes.

The Happytime Murders is a waste of time for the viewer and wastes the talents of those involved. I’d recommend renting for the curious. 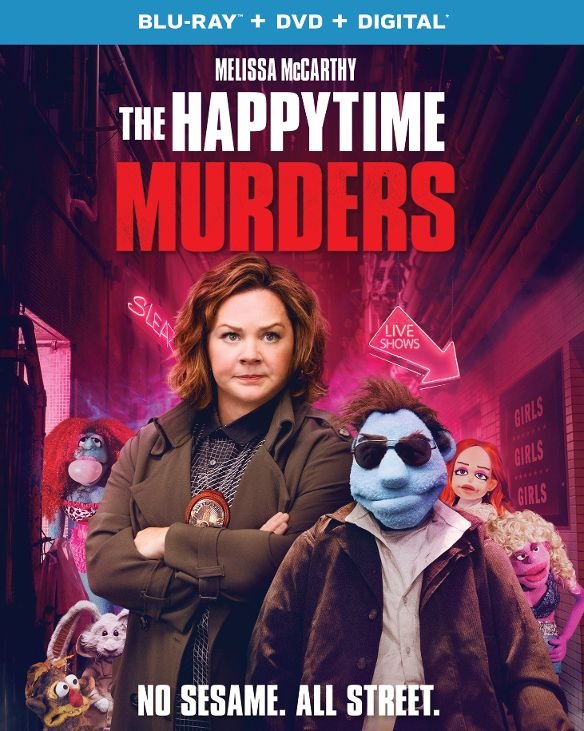