Posted on January 22, 2019 by Timothy Bodzioney
Highly recommended - Robert Aldrich at his most Aldrich 4.5 Stars

The Grissom Gang is director Robert Aldrich first and surprisingly only foray into the gangster genre.  Aldrich was an eccentric director, unpredictable in subject matter as well as the handling of the material.  When released in 1971 it was met with indifference from the critics and was Aldrich’s fourth box office failure in a row.  It ended the studio he bought with profits from The Dirty Dozen.

The Grissom Gang is, it could be said, the ultimate Robert Aldrich movie.  Based on British writer James Hadley Chase’s 1939 novel, No Orchids for Miss Blandish.    Chase’s novel was inspired by the writings of James M. Cain and William Faulkner’s novel, Sanctuary.  It was adapted into a London stage play in 1942 and then made into a British film in 1948.  The material was considered quite scandalous at the time.

Robert Aldrich chose it as his third independent production and hired British screenwriter Leon Griffiths to adapt.  Aldrich changed the title and unlike the earlier British film which took place the year it was produced, returned the story to the original era of the novel.

This plan, however is immediately gummed up when the psychotically dimwitted Slim Grissom (Scott Wilson) instantly falls in love with Barbara and refuses to murder the girl after receiving the $1,000,000 ransom from her father played by Aldrich regular Wesley Addy.  It is also at this point that the movies crashes into Aldrich-land.

Robert Aldrich was a restless director who never settled into one genre.  Aldrich is weird in that his movies are sometimes cerebral and intuitive at the same time.  He could be similar to directors like Howard Hawks or Stanley Kubrick in that his work in a genre is a well thought out comment on the genre itself.  Kiss Me Deadly, his only Private Eye film falls into that category – it’s as if Aldrich says all that he has to say about the genre in that one film and moves on from the genre, never to return.  The Grissom Gang also falls into this category – almost Aldrich’s summation of the gangster genre.

Some Aldrich movies are genre exercises and he later returns to the genre to refine or expand upon themes.  Aldrich does this by taking a well-established genre and tweaking it by adding unexpected elements and themes to create something new and unique.  In Whatever Happened to Baby Jane? Aldrich goes back to a genre he had already worked, in this case, the Woman’s Picture (Autumn Leaves) and injects gothic horror and black humor and pretty much single handedly creates a new genre.  In the 1954 western Vera Cruz, Aldrich injects his brand of cynical anti-authoritarianism/anti-imperialism to what had become a kiddie matinee genre and anticipates Peckinpah and Leone by a decade.  I’ve always felt that Vera Cruz is the unsung missing link to the revisionist western.  At the peak of the Vietnam War he would return again to the Western with Ulzana’s Raid where he questions the Western myth of Manifest Destiny and its inherent racist imperialism while exploring misplaced and misused US military power with Native Americans substituting for the Vietnamese.

When viewed as a whole, Aldrich movies can seem like a one-sided conversation about ‘America’, much like the cinema of John Ford, with unrelated movies fitting together with or commenting on past films.

Aldrich returns to the theme of power dynamics in The Grissom Gang; sexual power, familial power, political power, criminal power, and power between classes.  Aldrich treats each of these elements like constant everyday battles that are at play in all societal interactions and add up to a corrupt and sick world that reflects the amorality of those at the top of the power structure.

All sexual relationships in The Grissom Gang are suspect; Ma Grissom is like a perverse Ma Joad seizing power from a group of stupid, stunted, and ineffectual men.  It’s never stated where Pa Grissom is, but it can be guessed that he was no match for Ma.  Every sexual relationship is either mercenary or one of convenience that often ends with death – Eddie gunning down Anna and Ma gunning down Doc.  Ma is the only one who can control the crazed Slim, that is until he discovers his ‘romantic’ feelings for Barbara Blandish.

The relationship between Slim and Barbara is the center of the movie.  In it, Aldrich explores both the Stockholm and Lima Syndromes – where both captor and captive become emotionally attached to each other.  Who is in power in this relationship, the brutal and scary Slim or the spoiled rich girl, Barbara?  As the film goes on, we see that the only genuine relationship is the one that develops between Slim and Barbara.  By the climax of the movie each character is concerned with the fate of the other with Slim futilely sacrificing his life for Barbara’s welfare.  Blandish’s rejection of his daughter at the end is devastating.

Critics at the time of the film’s release attacked it for its lack of sympathetic characters – this isn’t quite accurate.  But as usual, Aldrich does test the audience’s sympathy.  Robert Lansing’s private investigator Dave Fenner is cold, but unlike Blandish understands exactly what Barbara is going through.  His quest to rescue her is based on his desire to free her from psycho-sexual bondage but where she will fit into society after her rescue is anyone’s guess.  Slim is crazy, but his feelings for Barbara are sincere – in this he is almost like a love-struck King Kong.  He can’t help what he is any more than she can change where she is from.  The most tender moments of the film are those that precede the bleak ending.

Scott Wilson and Kim Darby are great as Slim and Barbara.  These are the only two characters that change during the course of the film.  Wilson is animal like in his brutality but is childlike when initially spurned and humiliated by Barbara.  It is a simultaneously flamboyant and subtle performance.  Kim Darby has to go from repulsion to sad affection all the while being terrified for her life.  It’s the most difficult role in the film with her character learning the most, and Darby is excellent.  Tony Musante is effectively slimy as Eddie and Connie Stevens is intentionally shrill and coarse as Eddie’s moll Anna.  Don Keefer, with a mug of rosacea in full bloom is the personification of one of Faulkner’s back-alley doctors.  Irene Daily as Ma Grissom is something that must be seen to be believed – she plays it like a female Tony Camonte from Scarface. Her demise even reminded me of the climax of Hawks’ classic.   Ma is a comic perversion of femininity and maternity.

The film was also attacked for being immoral, but I think that too is inaccurate.  Aldrich is a curdled romantic or perhaps a wised-up idealist, like Billy Wilder but without a trace of Wilder’s sentimentality.  Aldrich rubs his audience’s nose in a grotesque and corrupt world, almost implicating the audience along the way.  The Grissom Gang like many other Aldrich pictures is about demythologizing, whether it’s show business in films like The Big Knife, Whatever Happened to Baby Jane?, or The Legend of Lylah Clare or military valor in films like Attack or The Dirty Dozen and in this case the gangster mythology.  Compare The Grissom Gang to the following year’s The Godfather; there is nothing admirable, romantic, or honorable about the thugs in The Grissom Gang.  The Grissoms are closer to The Jarrett’s of White Heat or even the family in The Texas Chainsaw Massacre than to the Corleone’s.

Frequent Aldrich DP Joseph Biroc shoots this morally depraved world with sweat dripping literally from every frame.  It isn’t a ‘pretty’ film but that is intentional and is expertly shot.

I’m sure a revisionist gangster film sounded like it could have been a hit in 1971.  It was made in the middle of a wave of nostalgia themed films of the 1970’s and was certainly more violent physically or psychologically than would have been permissible even 5 years earlier.  But The Grissom Gang was a box office disaster.  It was too dark for even the newly found permissiveness of The New Hollywood of the late 60’s and early 70’s.  It’s a shame because Aldrich was doing perhaps the best work of his career in this period, but kept striking out, with the exception of The Longest Yard and Hustle, at the box office.

The transfer of The Grissom Gang is advertised as a new HD Master of a 4K scan of the original camera negative, the same as The Killing of Sister George.  The Grissom Gang looks better with much more stable and consistent colors.  There are a few shots in the first half of the picture that look like they come from dupes and I noticed some scratches and stray marks.  I have never seen a 35mm print of this title, but to sound like a broken record, it looks much better than I’ve ever seen it look in the past, whether broadcast or on video.  Ma Grissom’s mustache is clearly visible.

The sound is DTS-HD Master 2.0 and is clear and mixed well with music and sound effects never obscuring dialogue.

A recently shot interview with Scott Wilson.  I’ve never seen Scott Wilson interviewed before and didn’t know what to expect.  Would he be like a ‘Scott Wilson’ character?  He isn’t.  He’s intelligent and thoughtful and is very articulate about his craft.  He speaks respectfully about Aldrich and fondly about the production and other cast members.  He says he regrets never working with Aldrich again.  The interview is moving because it was obviously shot shortly before Wilson’s death last year.

There is a commentary with Film Historians Howard S. Berger, Steve Mitchell, and Nathaniel Thompson.  I was as disappointed with this commentary as I was with the two included in The Killing of Sister George.  It was kind of like three guys talking about a movie over pizza with each one pretty much agreeing with what was just said and repeating the what was last said only using different words.  I couldn’t distinguish one from the other and didn’t find any of their comments particularly insightful or entertaining.  I would have enjoyed it more if more production information had been included.

The Grissom Gang is major Aldrich.  Kino, as usual is to be commended for releasing another obscure but important film on Blu Ray.  I’m praying that Aldrich’s masterpiece Ulzana’s Raid and vilified The Choirboys are included in their Universal package. 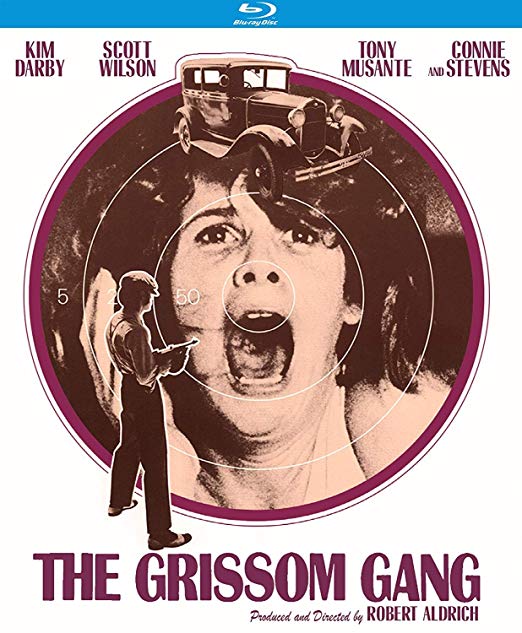