Forum List What's new Dark Style Change width
Log in Register
What's new Search
Menu
Log in
Register
Navigation
Install the app
More options
Dark Style
Close Menu
Posted on March 11, 2021 by Matt Hough
You are using an out of date browser. It may not display this or other websites correctly.
You should upgrade or use an alternative browser.
Fictional biography is loaded with beautifully sung arias. 3.5 Stars

Richard Thorpe’s The Great Caruso is a rather by-the-numbers, often fictional biography of the great operatic sensation of the late 19th and early 20th centuries, but its entertainment value is excellent, and the new Warner Archive Blu-ray release does it full justice.

If you’re looking for biographical accuracy, don’t look to Hollywood of the Golden Age especially if the subject is connected to the arts; its primary focus then was entertainment, not factual authenticity. Richard Thorpe’s The Great Caruso is a perfect example: a popular, celebrated artist whose real life story was fraught with legitimate drama but whose movie biography was reduced to a rags-to-riches-to-heartbreak trope: a story we’ve seen multiple times in the movies only this time accentuated with glorious operatic arias (and a few pop numbers) to flesh out its predictable story. With MGM’s star tenor in the title role and assisted by some renowned opera names and a first-rate production, The Great Caruso is an opera lover’s dream.

Born to a poor Italian family in Naples, young Enrico Caruso (Peter Edward Price as a child, Mario Lanza as an adult) is blessed with a clear, ringing tenor voice, but the father (Nestor Paiva) of his girl friend Musetta (Yvette Duguay) doesn’t believe he can support his daughter earning pennies in the street singing, so Enrico joins the father’s flour business. Soon, however, he’s discovered singing for fun in a café and works his way through the ranks to become an opera star, first at La Scala, then in London’s Covent Garden, and finally at the Metropolitan Opera House in New York. His reception at first in the Big Apple is underwhelming causing The Met’s house manager Park Benjamin (Carl Benton Reid) to regret hiring the young tenor, but a ringing endorsement from famed retired tenor Jean de Reszke (Alan Napier) wins over New York society who agrees with Benjamin’s lovely young daughter Dorothy (Ann Blyth) that Caruso’s voice is something special. Being opposed by his own daughter does not endear the singer to the father when Caruso comes to ask for his daughter’s hand in marriage.

Sonya Levien and William Ludwig’s screenplay (suggested by parts of Dorothy Caruso’s book on her late husband) doesn’t spend much time at all with the young, budding tenor (about six minutes before the adult version played by Lanza emerges), and the tired disapproving father trope is pulled out twice in the film for both girls that Caruso loves (especially ludicrous since this Caruso is the soul of respectfulness with a stern work ethic and a noticeable God-given talent that seems to count for nothing with these stubborn men.) Journeyman director Richard Thorpe keeps things moving along in a couple of montage sequences illustrating Caruso’s rise through the chorus to becoming a star and a later sequence showing him on a world tour after his belated New York triumph though he doesn’t show the least bit of flair in presenting the opera sequences with any ingenious presentational effects: always a long shot followed by a medium shot for most of the arias with an occasional close-up at moments of extreme dramatic punch in the music. But opera devotees will definitely enjoy conductor Johnny Green’s handling of the arias from such immortal pieces as Aida, La Boheme, Rigoletto, Tosca, Martha, and I, Pagliacci (in the latter, a rather chic use of the song is used as the clown crying through his laughter mirrors Caruso’s own misery of the moment when his beloved Dorothy doesn’t show up as expected for his concert). We get some pop songs, too: Ann Blyth gets to show off her warm mezzo soprano in the movie’s song hit “The Loveliest Night of the Year” while she and Lanza duet for a bit of “Under the Bamboo Tree” and Lanza’s own very moving “Because.”

With Mario Lanza under an MGM contract, it seems impossible that certain people at the studio weren’t sold on Lanza playing the title role, but he was born for it: his voice reaches heights of rapture in his arias and his fluctuating weight works nicely in this movie as he ages realistically from a young man to one of middle age. Ann Blyth offers a lovely, modest performance as the loving friend and later wife (this was the beginning of several high profile roles for her in MGM musicals). Opera star Dorothy Kirsten is grounded and concerned as the least diva Metropolitan Opera star in existence Louise Heggar. Carl Benton Reid and Nestor Paiva both play their one-note disapproving father roles without much nuance (though Paiva has a little bit of fun with his clichéd part). Jarmila Novotna has a notable scene early on as a haughty prima donna disgusted with Caruso’s manners, clothes, and talent.

The film’s 1.37:1 theatrical aspect ratio is faithfully rendered in this 1080p transfer using the AVC codec. The images are clean and mostly quite sharp and detailed (except for rather wretched stock footage that pops up occasionally), and the Technicolor looks splendid with only a scene or two where there seems to be the slightest bit of color breathing (the Aida rehearsal sequence with Lanza and Kirsten). Contrast has been wonderfully dialed in for a most impressive picture. The movie has been divided into 52 chapters.

The DTS-HD Master Audio 2.0 mono sound mix offers up a clear and clean aural presentation (the film’s sole Oscar came for its sound recording). The dialogue, song lyrics, music, and sound effects have all been combined beautifully into a single track with no age-related problems with hiss, pops, flutter, or crackle.

Mario Lanza: Singing to the Gods (58:29, SD): a documentary produced by Mark Kidel for Turner Classic Movies on the life and career of Mario Lanza highlighting his discovery by Louis B. Mayer and his frantic ups and downs on stage, in films, on records, and on television.

Richard Thorpe’s The Great Caruso is a rather by-the-numbers, often fictional biography of the great operatic sensation of the late 19th and early 20th centuries, but its entertainment value is excellent, and the new Warner Archive Blu-ray release does it full justice. 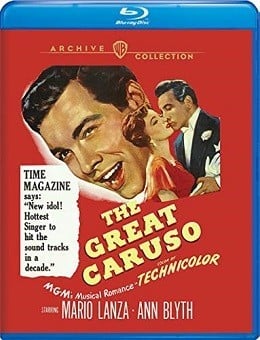