The new 4K transfer is “good enough” to convince fans to upgrade 4.5 Stars

To celebrate the film’s 35th Anniversary, Warner has released The Goonies on 4K UHD Blu-ray, but with no new features or upgraded sound mix.

If you were a child (or in my case, a teenager) of the 1980s, The Goonies is one of the many Steven Spielberg produced movies that, for better or worse, holds a place in your heart. The movie is a fun-filled adventure for kids about a group of kids led by Mikey (Sean Astin) who go hunting for the legendary treasure of pirate One-Eyed Willie in hopes of saving their homes that are scheduled for demolition by developers who want to build a golf course. To complicate matters, the kids have crossed paths with the Fratelli gang consisting of Mama Fratelli (Anne Ramsey), Francis (Joe Pantoliano) and Jake (Robert Davi), counterfeiters who recently broke the oldest son, Jake, out of jail during the thrilling opening sequence that introduces all of the main characters. The film also features a young Josh Brolin as Mikey’s older brother Brand, Jeff Cohen as Chunk, Corey Feldman as Mouth, Kerri Green as Brand’s love interest Andy, Martha Plimpton as Stef, Ke Huy Kwan (Short Round from Indiana Jones and the Temple of Doom) as technology expert Data, John Matuszak as the forgotten Fratelli brother Sloth, along with director Richard Donner favorite Mary Ellen Trainor as Mikey and Brand’s mother. Is The Goonies a good movie? That is debatable – most who became instant fans of the film during its original theatrical release (and subsequent VHS release and HBO airings) still hold the film in fairly high regard. I’m not sure what kids today would think of the film, or their parents with some of its questionable bathroom humor. Although I’ve always liked this movie since I first saw it in the summer of 1985, I will agree it hasn’t exactly aged well, yet it does stir a certain nostalgia for me.

Warner’s new 4K scan of the film with HDR10 high dynamic range is a sight to behold, a must-have upgrade over the 2010 Blu-ray release (which, sadly, is included in this set rather than down-res this new transfer and create a new Blu-ray). Details are exceptional, revealing a drastically sharper image than the ten-year old Blu-ray while still retaining a nice level of light film grain. Colors appear more natural (the colors on the Blu-ray seem over-saturated in comparison). Black levels are also vastly improved over the Blu-ray, which (as indicated by Cameron Yee in his review of the Blu-ray in 2010) were “somewhat limited in more dimly lit scenes.”

To me, the 5.1 remix first created for the 2001 DVD release of The Goonies has never sounded anywhere close to how it sounded to me when I saw it multiple times at the Budco Barn 5 just outside of Doylestown, Pennsylvania during its original theatrical run (likely in 4-channel magnetic stereo), which used the surrounds extensively. A good example was how Cyndi Lauper’s theme song opened up and expanded to the rears as our heroes escaped from Mikey’s house early in the film, which has been rather dull and even in the 5.1 remix. When this title was announced, I was hoping Warner was including a new Dolby Atmos mix to hopefully fix those issues. Unfortunately, that same 5.1 mix has been used again, this time using the DTS-HD MA codec (the 2010 Blu-ray used Dolby TrueHD but defaulted to lossy Dolby Digital). As Cameron Yee noted in his 2010 Blu-ray review, the “mix is somewhat front-oriented, but the surround channels include consistent support for the film score as well as the occasional directional effect. The full array engages for the film’s more action-oriented scenes and includes some surprisingly robust LFE. Detail in the upper ranges is also satisfyingly clear, and dialogue is consistently well-defined and intelligible.”

There are no features included on the UHD disc. Amazon does have a “gift set” edition that comes in a faux treasure chest box and includes a treasure map, embroidered patch, and collectible buttons for $49.99 (link is included below). Warner has included the 2010 Blu-ray release, which contains the following special features (as noted in Cameron Yee’s review):

Commentary by Director Richard Donner and the Cast: Recorded for the 2001 DVD release, the commentary is filled with anecdotes from production, but tends to be a lot to wade through because participants are often talking over each other. Still, it’s an entertaining track from a group who have good rapport and fond memories of working with each other.

Hidden Treasures Video Commentary: With this option selected, the video will swap at times to footage of the commentary recording session (this portion is obviously upscaled to 1080p). A somewhat novel approach to commentaries at the time it was made, the feature really only gives a snapshot of how the participants looked (20) years ago and doesn’t add much to the track itself.

The Making of Goonies (480i; 6:49): A vintage behind-the-scenes look at filming in Astoria, Oregon.

Deleted Scenes (480i; 6:53): Four scenes, the most notable of which is the excised giant octopus attack.

Digital Copy: An insert contains a code to redeem a digital copy (in UHD where available) on Movies Anywhere. There was a second insert that included a code for a 14-day trial of HBO Max.

Even as an adult in his mid 50s, I still enjoy The Goonies, although maybe not quite as much as I did during its original theatrical run some 35 years ago. The new 4K transfer with HDR10 is the only reason to pick this one up, as the sound mix and special features are the same as the 2010 Blu-ray release.

the feature really only gives a snapshot of how the participants looked 10 years ago
Click to expand... 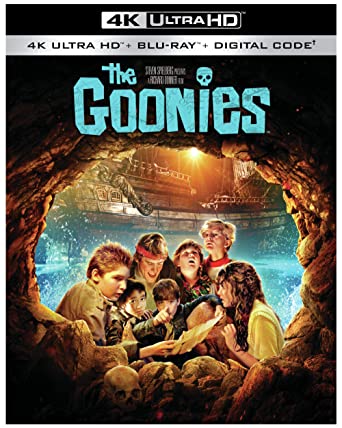