Ferenc Molnar’s rather caustic comedy becomes a delightful screwball romance courtesy of the talents of screenwriter Preston Sturges in William Wyler’s The Good Fairy. With a cast of whimsical comic actors and first-rate handling by the talented director, The Good Fairy emerges as one of the more unsung comedies of the Golden Age of screwball farces. In Kino Lorber’s newly released Blu-ray edition, it’s well worth experiencing.

In 1930s Budapest, innocent orphan Luisa Ginglebuscher (Margaret Sullavan) becomes an usherette at the local movie house, determined to succeed in her first job and pledging to honor her promise to do at least one good deed every day thus becoming some lucky someone’s “good fairy.” Luisa’s well-meaning lies of being married get her caught between potentially lecherous businessman Konrad (Frank Morgan) and decent, penniless lawyer Max Sporum (Herbert Marshall). Through Luisa’s manipulations, Max is offered a lucrative official position in Konrad’s meat conglomerate while both men hope to win the comely lass over into a romance with one of them.

Writer Preston Sturges has taken some of the knowingness from the character of Luisa making her much more appealing as an innocent in the world in general and with men in particular. Though the number of gents who attempt to put the moves on the lovely lady are numerous (including a wolfish Cesar Romero in an upsetting cameo), she manages to protect her virtue through a combination of pluck and precociousness. Sturges also manages to insert several hilarious if somewhat talky confrontations between ace comic actors Frank Morgan, Reginald Owen (who plays Luisa’s guardian angel), and clueless Eric Blore (as lascivious Dr. Metz) where words fly so fast and furiously that one might need an instant replay to catch all the priceless comic wordplay. Director William Wyler handles it all at a quick clip (once we get past the situational orphanage scenes at the beginning) and manages to stage some striking shots that quickly seize one’s attention: a delightful sequence with Max behind the wheel of his first car gleefully tooting its horn, Luisa in a hall of mirrors modeling her new fur piece, and the climactic encounters where each character lays claim to the title of “good fairy.” Wyler and Sullivan clashed throughout production (and then married two weeks before its completion), but you’d never know it from the smooth results he garners, particularly with her.

Margaret Sullavan takes wonderful advantage of such a precious role, never overplaying its naiveté but maintaining audience sympathy throughout even in a silly scene of romantic tiff late in the film. Herbert Marshall is rather pitiful early on as the penniless and despairing attorney ready to chuck the profession, but he blossoms under the beneficence of Luisa and emerges as a charming and desirable leading man. Frank Morgan walks away with all his scenes with his magnificent way with words, able to take the wordiest and most befuddling speeches and spin them into comic gold. Reginald Owen takes a rather heavy hand to his protective waiter, but he does unquestionably have some funny bits of comic business. Many of the other famous faces in the cast get only a brief scene or two: Eric Blore hamming it up as an unsteady leach, Beulah Bondi as the head of the orphanage, Alan Hale as a theater owner in need of an usherette (which gets Luisa out of that confining orphans’ home), and Luis Alberni as an amusing barber.

The film’s 1.37:1 theatrical aspect ratio is faithfully delivered in this 1080p transfer using the AVC codec. It’s another velvety and appealing picture with just the right amount of grain present (perhaps more noticeable in the many close-ups). Grayscale is beautifully captured with lush black levels and crisp whites though there are a few slight scratches here and there which prevent the image from being completely pristine. Still, for a film of this age, it looks marvelous. The movie has been divided into 8 chapters.

Audio Commentary: film historian Simon Abrams has certainly done his research on the film as he continually reads from various volumes of film history and filmmakers’ biographies about the production of the movie and the principals before and behind the camera. Unfortunately, he doesn’t prove to be a particularly capable reader stumbling rather often over words and mispronouncing quite a few names of important personages (including producer Carl Laemmle, Sullavan’s agent Leland Hayward, actor Adolph Menjou, even the name of the Pantages Theater). It’s a sometimes aggravating listening experience.

William Wyler’s The Good Fairy is an excellent comedy that deserves to be much better known. With sparkling playing particularly by Margaret Sullavan, Herbert Marshall, and Frank Morgan, crisp writing by Preston Sturges, and striking direction by William Wyler, this new Kino Blu-ray earns a hearty recommendation. 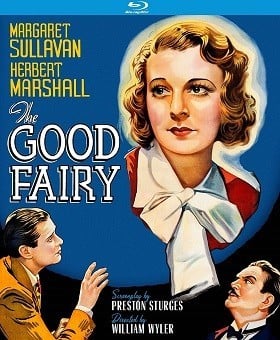