Pixar’s adept storytellers go on a journey of discovery and maturation with The Good Dinosaur, a model of narrative moxie and character building acumen that once again plants the studio at the forefront of digital animation.

Pixar’s adept storytellers go on a journey of discovery and maturation with The Good Dinosaur, a model of narrative moxie and character building acumen that once again plants the studio at the forefront of digital animation. A troubled production which underperformed at the box-office but is nevertheless an absorbing trip of involving adventure and heartfelt emotion, The Good Dinosaur can stand tall with its Pixar cinematic siblings.

On an Earth in which the dinosaur population was not obliterated by an asteroid collision with the planet, Arlo (Jack McGraw as a baby, Raymond Ochoa as a preadolescent) is born as the runt of a litter of three apatosaurus babies. The family functions as farmers of their land situated somewhere in the American northwest with strong Poppa (Jeffrey Wright) and loving Momma (Frances McDormand) guiding their three kids. But Arlo is afraid of everything, even a mongrel orphaned human boy he later names Spot (Jack Bright), and in trying to rid the farm of Spot’s food thievery, Poppa is accidentally killed and Arlo is swept far away down a raging river with no idea of how to get home other than following the river back to the farm. On his way back to his family, Arlo encounters strangers along the path, some friendly and some menacing, but all of whom offer life lessons on getting along in the wilderness, conquering his fears, and relying on friends when one’s own abilities can’t do the job.

Meg LeFauve’s screenplay, based on story ideas from four other Pixar story specialists including director Peter Sohn, follows the common “road” motif: a long journey to one’s beloved home which offers life lessons on which to grow and build character as the protagonist faces one peril after another and encounters a motley collection of different personalities which may either be embraced or rejected. The most striking thing about the movie, however, isn’t this rather standard means of building character but rather the animators’ astonishing photorealistic settings and its curtailed use of dialogue. Yes, the dinosaurs do talk, but once Arlo and Spot are off on their adventure, there is more pantomime utilized in the film than in any previous Pixar adventure, and it’s a tribute to the animators that along with the stunning backgrounds, they’ve animated the characters so fluidly and believably that we can understand their behaviors from facial expressions and body language without the need for words at all. In the early going, there are some priceless moments that the animators seem to throw away, not sustaining scenes which clearly could have been signature moments: one sequence where Arlo and Spot eat fermented peaches and begin to hallucinate could have been extended an easy five more minutes but instead they pass out quickly and awaken hung over and droopy. On the other hand, an enchanting moment when Poppa shows Arlo the miracle of fireflies proves one of the film’s best moments, a brilliantly animated masterwork sequence that is echoed later in the movie when Arlo shares his knowledge with the plucky Spot.

One must either decide to buy into the anthropomorphic dinosaur clans with apatosaurs as farmers, T-Rexes as ranchers, raptors as hillbilly cattle rustlers, and pterodactyls as predators or leave the film behind since the animators count on our identifying with those western tropes in order for a good chunk of the film to work at all. If you can accept it, then you’re in for a lot of fun as T-Rexes Butch (Sam Elliott), Ramsey (Anna Paquin), and Nash (AJ Buckley) herd their bison-like creatures across the plain while scavengers Thunderclap (Steve Zahn), Downpour (Mandy Freund), and Coldfront (Steven Clay Hunter) wait in the wings ready to pounce. All of these experiences enable Arlo to learn and grow into the kind of animal his father wanted him to be, ready to leave his mark on the world (both a symbolic and actual gesture which carries weight in the film’s heart-tugging scenario).

Superb voice work is characteristic across the film from large parts like Raymond Ochoa’s lovable and approachable Arlo to smaller roles like the director Peter Sohn’s deadpan cameo vocal appearance as the Pet Collector, a styracosaurus whose horns serve as home for a variety of amusing creatures. There’s no mistaking Sam Elliott’s glorious stentorian tones as he relates tales of the Old West to his kids and the wide-eyed Arlo and Spot while Steve Zahn has a field day as the cacklingly evil Thunderclap eager for his next meal and not too picky about where it might come from.

The film’s theatrical aspect ratio of 2.39:1 is faithfully rendered in this 1080p transfer using the AVC codec. Sharpness is stunning throughout, and the amount of detail you’ll note in rocky crevices, sandy shores, and the raging river will likely make you want to pause and study masterful animation at its finest. Color is bright and brilliantly realized without ever edging into blooming. Contrast has been consistently maintained, and there is no banding to mar a superbly balanced and nuanced picture. The movie has been divided into 29 chapters.

There is a 3D version of the film available for purchase, but it is not reviewed here.

For some reason, the default audio selection is a DTS-HD High Resolution 5.1 sound mix. I chose the other surround offering: DTS-HD Master Audio 7.1 and enjoyed a beautifully constructed soundtrack with matchlessly recorded dialogue which has been placed in the center channel, tremendously complex atmospheric effects split into various channels in the fronts and rears (and with sometimes thundering use of the LFE channel), and the engaging background score of Mychael and Jeff Danna also channeled through the entire soundstage.

Audio Commentary: director Peter Sohn is joined by story supervisor Kelsey Mann, supervising animator Michael Venturini, director of photography and lighting Sharon Calahan, and special effects technician Sanjay Bakshi. The quintet have a lively discussion of their contributions to the film with director Sohn often prodding them to tell more about the labor involved in getting the film exactly as they wanted it.

True Lies About Dinosaurs (1:56, HD): brief facts about what’s true and untrue about information in the movie.

Recyclosaurus (6:19, HD): a contest run at Pixar during the film’s production in which each department constructed something modeled from the film using only duct tape and items on a recycle cart.

Every Part Of The Dinosaur (6:08, HD): director Peter Sohn, supervising animator Michael Venturini, and lead animator Jessica Torres among others offer soundbites about the challenges of animating dinosaurs.

Following The T-Rex Trail (6:58, HD): director Peter Sohn and story supervisor Kelsey Mann introduce us to Joe McKay and his family who were used as models for the characters of Butch, Ramsey, and Nash in the movie.

Deleted Scenes (10:41, HD): three scenes are each introduced by director Peter Sohn who explains the decisions about the deletions. They may be viewed separately or in montage.

Dinosaur Bites (4:15, HD): a series of blackout comic sketches in which the personalities of the movie characters are explored.

Hide and Seek (0:59, HD): a promotional short scene with Spot and Arlo.

The Good Dinosaur may not have gotten the universal acceptance of many of the previous Pixar films, but it’s certainly first-class entertainment with astonishing animation and a story which is easy to identify with. The Blu-ray release is highly recommended! 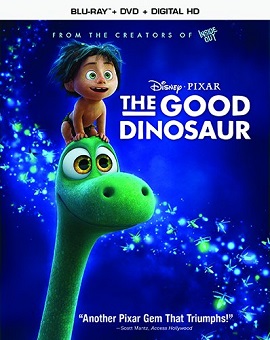