Flicker Alley’s release of The Golden Head presents this single-strip large format production on Blu-ray and DVD in a smilebox presentation which recreates its original Cinerama exhibition. Although the film itself is little more than a travelogue through Budapest, the scenery is pretty and the cast is pleasant.

The Golden Head is an almost forgotten Cinerama curiosity: a single strip travelogue with more of a story than the earlier Cinerama three-strip productions, but which played only briefly in London during its original run. Though the film might have a more limited appeal for a general audience today, it is nonetheless an essential release for fans of the Cinerama format.

Unlike many of the earlier Cinerama productions, The Golden Head was conceived as a more narrative affair, with an actual cast performing scripted roles rather than being a mere sightseeing journey. Of course, this narrative has been designed to give an excuse for the large format camera to wander around Budapest circa 1965, allow the viewer to take in some gorgeous local color. The film’s threadbare plot is set in motion when two mismatched thieves (played by an ever-patient George Sanders and an occasionally exasperating Buddy Hackett) steal a treasure, the titular golden head statue, from the art museum. On the trail of the unlikely duo are three young siblings (played by Jess Conrad, Lorraine Power and Denis Gilmore), who are the children of a British policeman who is taking them to Hungary on holiday. Everything plays out much as expected, with little or no surprises along the way.

The Golden Head offers a template of sorts that the IMAX corporation would use (whether they realized it or not) in their earlier documentary features, using a simple plot centered around younger protagonists to present an all ages journey for the viewer to places they might not have the opportunity to travel to on their own. As a collection of images of Budapest in the mid-60s, it’s a fun look back at a time that no longer exists. But as an actual film, it leaves much to be desired. The direction by Richard Thorpe (who replaced James Hill during production) tends to be lethargic, and the performances from the children are merely adequate. (At one point, the producers had been hoping to cast Hayley Mills, who could have brought some much needed energy to the project.) Sanders and Hackett fare a little better, but the script gives them little to work with.

The Golden Head was restored by David Strohmaier and is presented on disc in a curved smilebox format which simulates the original Cinerama exhibition. As usual, Strohmaier achieves a minor miracle by taking faded older material and bringing it to something remarkably close to what would have been seen by its original audience. As a single-strip production, there are no join lines here, and the image itself is remarkably clean and stable. Color is generally pleasing and strong (with occasional minor inconsistencies), and sharpness and detail is general good, though perhaps short of reference quality. But this is all minor-nitpicking: a quick look at the included restoration demonstration reveals just how much Strohmaier has accomplished in his work, which is to be commended.

The film’s soundtrack is presented in the lossless DTS HD-MA 5.1 format and generally sounds terrific, with good clarity and dialogue well balanced with music. While it’s not as active a soundtrack as some of the previous Cinerama titles, the musical score makes nice use of the soundstage. There are no issues with hiss or any other age-related artifacts.

Fortress Of Peace (22:01, HD) – Presented in Smilebox with DTS-HD MA 5.1 audio, this Swiss Army propaganda film is an unusually impressive piece, with spectacular photography. This short was originally shown before The Golden Head during its original run. The restored presentation here may be worth the price of admission on the whole package in and of itself.

A Tale Of Old Whiff (16:41, HD) Presented in a more conventional flat 2.20:1 aspect ratio but with DTS-HD MA 5.1 audio, this 1960 cartoon short is in rougher shape than the main feature, but nonetheless has historical value for Cinerama fans, as it originally ran before Scent Of Mystery.

Restoration of The Golden Head (4:47, HD) – Dave Strohmaier narrates this demonstration of the restoration process. It may be worth viewing this before the main feature for a better understanding of what Strohmaier has accomplished.

Restoration of the animation A Tale Of Old Whiff (5:55, HD) – Strohmaier narrates a restoration demonstration which explains the history of the short and how the lost short was brought back to life from a recently discovered but badly faded 70mm print.

Trailer Gallery – Trailers are presented for a variety of Cinerama features, including The Golden Head.

Booklet – The film’s original program is reproduced in the package’s booklet.

DVD – The set also includes a DVD version of the film and bonus features.

While The Golden Head is a forgettable film in and of itself, that only makes the care and attention shown to it in this Flicker Alley release more impressive. Dave Strohmaier has done his usual heroic work in bringing the film back to life, and the included bonus material allows the viewer to both recreate the original theatrical presentation while also providing a fascinating look at how the film was restored. While the film may have a more limited appeal among casual film goers, this release is highly recommended for Cinerama fans.

So disappointing that this was released in Smilebox only. Smilebox makes sense for 3-strip Cinerama, but not for 1-strip 70mm. They could have at least included a normal version as an alternative.

I'm very interested in this film but the distortion is putting me off buying it (for now).

But that's the way you would have seen it in London at the Cinerama Theater.
Reactions: DP 70, Charles Smith and Josh Steinberg
J

At the Royalty Cinerama no less!
Reactions: DP 70 and Josh Steinberg

Dave - I’m continually impressed by these releases. This one was no exception! I wasn’t around to experience the original Cinerama but I’m grateful for the opportunity to simulate it at home.
Reactions: DP 70, Douglas R, moviebuff75 and 2 others

I'd rather have a flat version and I'm glad that It's a Mad Mad Mad Mad World didn't get the Smilebox treatment.... exclusively, at least. I don't mind the option but for single-strip films it shouldn't be the only version.

Dear Ross
Sorry you don’t get the Cinerama road show experience but this is the way audiences originally saw these films both in 3-strip and in 70mm at the all original road show exclusive presentations. They were curved screens, had curtains, intermissions, program booklets, overtures etc. and that’s what we do at Cinerama - re create that experience as best as possible. We have also done this in traditional theatrical settings on flat generally curtain less screens at many festivals, cinematheques, museums in England, Germany, France, Holland, Poland, Austria, Denmark, Norway, Canada and in many cities in the US. Last year we did an entire day of Cinerama at MOMA in NY with our curtains and SmileBox via DCP.


For years we cinephiles fought for letterbox versions of classics in order to see them the way people originally saw them in theaters. The producers of the Cinerama 70mm films knew they would be shown exclusively on Cinerama curved screens for their initial release. The road show experience is pretty much lost these days so our Cinerama road show versions of these films is in the same spirit as the push for letterbox versions.


FYI -We had a sold out screening of “Mad, Mad World” last November 7th, both the birthday of the Dome theater and the premiere of the film. No one was disappointed that it was shown on a real curved screen, had curtains cued, overtures, programs handed out and at intermission police radio calls. That is what we do here at Cinerama and most people appreciate the extra effort of original showmanship presentations in their home theater.


If we had normal budgets on these Cinerama releases, like the big studios do, then I would have no objection to a letterbox, curtain less version in the same package. But the road show experience is what was the most important to our customers and distributor. “So let it be written, so let it be done”
Reactions: Jimbo64, Dick, RBailey and 10 others

Thank you for your reply.

It's not that I "don't get it", it's just that I think it's the wrong approach for a single-strip film. I'm talking specifically about the Smilebox-only presentation.

FYI -We had a sold out screening of “Mad, Mad World” last November 7th, both the birthday of the Dome theater and the premiere of the film. No one was disappointed that it was shown on a real curved screen
Click to expand...

That's fine for a proper theatrical presentation, but if you were the producer of the Mad, Mad World Criterion Blu-ray, would you have gone for a Smilebox-only release?

I am looking forward to seeing Ice Station Zebra at Bradford at this years WSW on the Cinerama screen, Grand Prix looked and
sounded fantastic last year.
Thanks again David for all your hard work.

But it is in fact the right choice for any Cinerama film that was was originally presented on a curved Cinerama screen as a roadshow presentation either 70mm or 3-strip.

That's what we try to do - create the original "proper" theatrical presentation at home for the home theater fan.

Others companies can do what they want but we want to do it right.

And yes if I were the producer of the Mad Mad World release I would have had Curtains, Smilebox etc. and no problem with also doing a flat version if we had the funds in the budget.

In the specific case of "The Golden Head," it was conceived to be shown on curved Cinerama screens, and if I understand all of the included bonus material properly, that's the only way it was ever exhibited in commercial theaters. I am fully supportive of the endeavor to present it for home viewing in the manner in which its filmmakers conceived it.

For me, this might be analogous to a 3D movie where the production might have used 2D cameras on set, but had always intended for the final film to be seen in a 3D presentation. (Think of something like "Gravity" or "The Walk".) In my view, how a film should be presented is dependent on more factors than just what kind of camera was used on set. Otherwise, if you follow that thinking to its natural conclusion, we should only listen to films in mono because the microphones used on set are monaural. But obviously, recording the dialogue is only one small portion of the actual process in creating a sound mix. In much the same way, though the film was shot single strip, it seems obvious that the intention was for it to be viewed on a curved screen.

From my more limited perspective, I found the smilebox presentation to be more visually pleasing than the flat clips which were shown briefly in the bonus features.
Reactions: Douglas R

Josh Steinberg said:
From my more limited perspective, I found the smilebox presentation to be more visually pleasing than the flat clips which were shown briefly in the bonus features.
Click to expand...

Fair enough. I guess this one just isn’t for me. 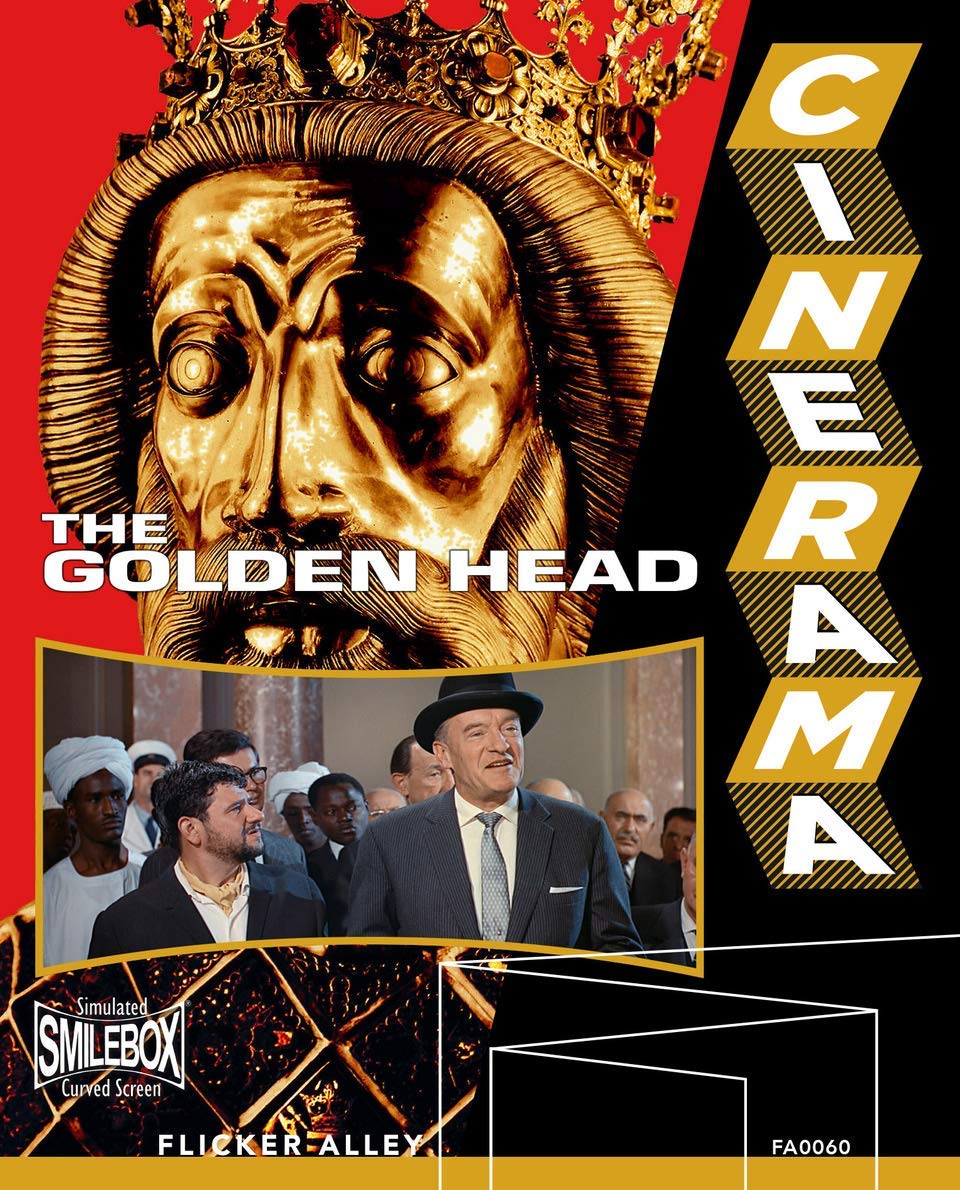