Posted on August 4, 2019 by Matt Hough
The third and least impressive version of the classic play still has merit. 4 Stars

The third screen version of the legendary Charles MacArthur-Ben Hecht play The Front Page, this time directed by Billy Wilder, tries its best to measure up to its widely respected predecessors but to no avail.

The third screen version of the legendary Charles MacArthur-Ben Hecht play The Front Page, this time directed by Billy Wilder, tries its best to measure up to its widely respected predecessors but to no avail. Despite a crackerjack star duo and a triumphant array of much heralded character actors in all of the important supporting roles, the movie emerges as just an adequate representation of the comedy-drama, neither as faithful to the original play as the 1931 film version nor as furiously fast and funny as Howard Hawks’ masterpiece His Girl Friday.

Successful Chicago newspaper reporter Hildy Johnson (Jack Lemmon) is hanging up his journalist’s hat to marry organist Peggy Grant (Susan Sarandon) and move to Philadelphia to become an advertising executive in her father’s firm. When his editor, the arrogant, calculating Walter Burns (Walter Matthau), learns of Hildy’s plans, he goes to great lengths to keep his star writer covering the year’s most sensational murder trial and now looming execution. They learn that the notorious (but possibly wrongfully accused) criminal Earl Williams (Austin Pendleton) has escaped from the inept local sheriff (Vincent Gardenia) on the eve of his execution, and Hildy finds that despite loving Peggy, he can’t resist this one last sensational story once Earl Williams falls into his hands quite by accident.

Director Billy Wilder and his writing partner I.A.L. Diamond have kept the gist of the play’s narrative, but they’ve added scenes away from the play’s single set pressroom, taken away some minor characters, and added some others in building up parts of people merely spoken of in the play and come up with a reasonably faithful rendition of the comedy. In attempting to keep the atmosphere of a 1929 pressroom legitimate, a great deal of profanity, some from the original play but with much more added in, has been woven into the dialogue giving the comedy a rougher and more biting edge than in any previous movie rendition of the story. It doesn’t make the comedy any funnier, however, and the comic timing is further dissipated due to Wilder’s tendency to use long takes rather than rapid editing to speed up the dialogue (causing in some instances actors to stand in frame waiting for their cues lessening the tempo of various exchanges). Perhaps to counteract this occasional plodding dialogue, Wilder has three sequences when emergency vehicles and police cars race down streets with the camera undercranked making the action unnaturally sped up to less than hilarious effect. Using Panavision once again, Wilder does show himself a master of framing his large cast often spreading all of the characters across the screen in interesting compositions that allow the viewer to focus on any of the marvelous actors playing their roles even when someone across the room is speaking.

Walter Matthau was born to play Walter Burns, and his performance, all braying ego and calculating nefariousness, is a gem in his filmography. Jack Lemmon, while fifteen years too told to play Hildy here (it’s too bad Wilder didn’t do this film immediately after The Apartment), still manages to give a jaunty vibe and a casual ease to his acting that doesn’t lessen Hildy’s appeal. Austin Pendleton, like his predecessors in the Earl Williams role, offers comedy and pathos in equal measure and is among the film’s treasures. Susan Sarandon makes good use of this early screen credit to do just fine with the innocent and eager Peggy Grant, but the other primary female role, hooker-with-a-heart-of-gold Mollie Malloy, is rather undone by Carol Burnett’s desperately brittle and shrilly miscalculated performance. Other Mollies have tempered their disgust for the journalists with a resigned sadness over the unfairness of the justice system, but Burnett’s Mollie is all bombast with no shadings at all losing almost all sympathy and empathy for her from the audience. Vincent Gardenia’s cartoonish bungling sheriff is fun as he attempts to walk back his mistakes rather than admitting them, and Harold Gould as the Chicago mayor who’s had about enough of his ineptitude shines is a couple of scenes. And the pressroom stiffs who report and enhance stories on a whim couldn’t be covered by a greater cast of experienced character actors: Charles Durning, Herb Edelman, David Wayne, Allen Garfield, Dick O’Neill, Lou Frizzell, and innocent newcomer Jon Korkes playing the uber-green Rudy Keppler.

The film’s original Panavision aspect ratio of 2.35:1 is faithfully rendered in this 1080p transfer using the AVC codec. While free from any age-related problems with dirt or damage, the clean image retains (though with a shade less saturation) the somewhat rotogravure look of theatrical engagements where to convey a much earlier period, a brownish tone overall is used (similar to Universal’s filming of The Sting the year before). The movie has been divided into 8 chapters.

The DTS-HD Master Audio 2.0 mono sound mix accurately portrays the sound design from the era. Dialogue is always clear and has been mixed well with the film’s sound effects and the very sparse background score by Billy May. There are no problems with hiss, crackle, hum, or flutter with this track.

Audio Commentary: film historians Michael Schlesinger and Mark Evanier offer a chatty and enjoyable commentary track managing to offer opinions and analysis on the movie and its wonderful array of actors in an upbeat and engaging manner.

Production Assistants Interview (21:45, HD): first assistant director Howard Kazanjian and Billy Wilder assistant Rex McGee (who was with the director for twenty-nine years) share reminiscences about the eight weeks of making the film and of the personality of its producer-director Billy Wilder.

It’s not as good as His Girl Friday (few movies are), and it doesn’t quite have the snap and freshness of the 1931 version, but Billy Wilder’s The Front Page still carries with it a goodly amount of entertainment bang for the buck. The Kino Blu-ray offers an excellent video and audio representation of the movie which fans of the stars or the film will readily appreciate. 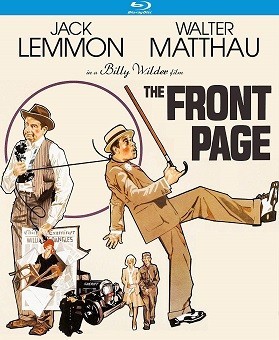