Rene Clair’s The Flame of New Orleans is a slight but fun romantic romp. While it looks beautiful, it’s rather like cotton candy: sweet to taste but rather insubstantial in the final analysis.

A wedding dress floating on the Mississippi River marks the jumping off point for Rene Clair’s sly comedy of manners The Flame of New Orleans. With a robust cast and glorious period design and costumes, The Flame of New Orleans looks like a million, but its slight script with its minimal conflict and so few surprises might seem too slight for one’s full attention.

In 1841 New Orleans, beautiful adventuress and con woman Claire Ledeux (Marlene Dietrich), newly arrived in America to find someone to support her lavish lifestyle here in the same way she had managed in London, Paris, and Vienna, warms to the attentions of rich banker Charles Giraud (Roland Young), but she can’t deny the lure of dashing sea captain Robert LaTour (Bruce Cabot) even though he hasn’t a penny. Her schemes are going well until former acquaintance Zolotov (Mischa Auer) from her European escapades spills the beans on her true identity necessitating Claire and her maid Clementine (Theresa Harris) to concoct a brand new scheme to keep her rich mark interested in her.

Norman Krasna’s script of class courtship and romance is light and airy, but it’s possibly too light with little in the way of surprise insofar as its protagonist’s inevitable final decision: will she marry for money or marry for love? Krasna and director Rene Clair (in his first Hollywood outing after fleeing the Nazi occupation of his native France) do manage to provide glimpses of both the upper and lower class surroundings in New Orleans: the plush and lavish mansions of Giraud and Claire’s rented abode contrasted with a later sequences set in a dive joint, the Oyster Bar Café and, of course, LaTour’s simple sailboat. Dietrich wears a succession of elaborate Rene Hubert gowns that are showstopping in their opulence (her introduction at the opera swathed in virginal, sparkling white is rather extreme even for her), and even her impersonation of her lower class cousin features billowing gowns of great creativity rather than tattered, old finery. She also manages to sing a song during the movie, “Sweet as the Blush of May” (as phony in its theme as the lady singing it): Dietrich utilizes her more delicate head voice here rather than her sultry lower register continuing as best she can her impersonation of a great lady at the spinet. Clair stages a great meet cute for the real lovebirds where LaTour teaches the “great lady” a thing or two about consideration that is the funniest moment of the movie. The Frenchman’s sophistication is also apparent in having homosexual characters rather brazenly interacting with the film’s other personages (one models negligees for Claire’s consideration; another arrives at a party looking particularly for interesting men but willing to settle for women if no men of substance are found). Allegedly, the film was in fact too sophisticated for the Production Code office necessitating two middle reels of the movie simply being jettisoned.

This marked the third film assignment Marlene Dietrich had accepted from producer Joe Pasternak at Universal, and as usual it’s meant to point up her comic talents as opposed to her dramatic ones, but Dietrich here seems more prone to slide back into old habits of letting her elaborate clothes and jewels do the work for her and doesn’t come off as well here as she did in Destry Rides Again or Seven Sinners. She does have good chemistry with Bruce Cabot (though she later admitted she didn’t care for him as her leading man) and is wonderful playing with Theresa Harris who does superlatively as her maid Clementine. Roland Young offers his usual performance as an aesthete with more money than common sense, and his obnoxious family is populated by some of the greats of Hollywood’s character actors: Laura Hope Crews, Melville Cooper, and Anne Revere. The always welcome Franklin Pangborn and Mischa Auer play the gay roués about town while Andy Devine, Frank Jenks, and Eddie Quillan act with rollicking good humor the shipmates always looking out for their captain.

The film’s original theatrical aspect ratio of 1.37:1 is presented in 1080p resolution using the AVC codec (main and end titles have been windowboxed). In the main, the image is beautiful, often lustrous with a strong grayscale featuring crisp, clean whites and deep blacks. You’ll notice the occasional scratch here and there, and there is some spotting and a bit of flicker, but it’s not rampant. There is no chapter listing in the main menu, but the movie has been divided into 9 chapters.

The DTS-HD Master Audio 2.0 mono sound mix is strong and secure with good fidelity for its era. Dialogue has been excellently recorded, and it has been mixed with Frank Skinner’s background score and the sound effects with much professionalism. There are no problems with age-related artifacts like hiss, pops, crackle, or flutter.

Audio Commentary: Film historian Lee Gambin offers interesting observations on the film (though I didn’t appreciate the gay characters being referred to as “pansy” and “faggot” by Gambin) interrupted three times with separate comments by film historian Rutanya Alda. Both of them make occasional errors (Roland Young didn’t win the Oscar for Topper; Alda gets some of Mischa Auer’s filmography scrambled), and Alda speaks so breathlessly that her information tumbles out in all directions. Still, it’s worth hearing once.

Kino Trailers: The Blue Angel, The Song of Songs, The Spoilers, Pittsburgh, A Foreign Affair, No Highway in the Sky, Witness for the Prosecution, The Young in Heart.

Rene Clair’s The Flame of New Orleans is a slight but fun romantic romp. While it looks beautiful, it’s rather like cotton candy: sweet to taste but rather insubstantial in the final analysis. Dietrich fans, of course, will be delighted to add another of her comedy roles to their high definition collections.

Omg I love this movie- this is a shocker- I’ve been looking for it for years!
Expand signature
RIP Ziegfeld and Paris Theaters NYC
You must log in or register to reply here. 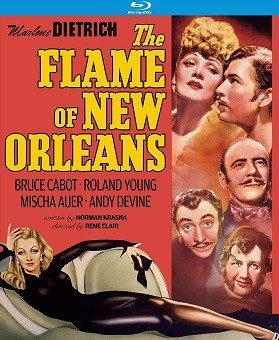