Set as the prequel to the existing Purge trilogy, The First Purge shows the events of the first time the Purge experiment was conducted in the United States, specifically on a quarantined Staten Island. Echoing the real political frustrations of modern America a new party rises: The New Founding Fathers of America (NFFA). The NFFA have embraced a radical concept championed by researcher Dr. Updale (Marissa Tomei). For 12 hours residents of Staten Island will be free to break any law they choose, including murder. The vast majority of residents, like Nya (Lex Scott Davis), have no intention of doing anything wild, but a stipend of $5000 has them willing to stay put and take their chances. Others intend to party the night away in a wash of sex and booze and drugs. The gangs are nervous about the Purge, it creates a wild card that leaders like Dmitri (Y’lan Noel) don’t trust. But a small percentage actively want to embrace the freedom that a Purge could give them, including psychopaths like Skeletor (Rotimi Paul). Un-known to all of them is that the NFFA have plans to make The First Purge a massacre even if most of the residents won’t partake. As the night progresses it becomes clear that the gangs and the residents will have to work together just to survive, because the odds are stacked against them. 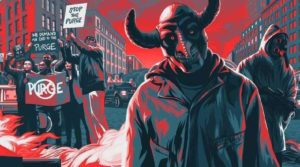 You’ve got to give Blumhouse credit, they keep working the strategies that have been successful for them in the past in building out new horror franchises.  By tying the Purge to today’s raw political emotions and racial tensions they have made it more relevant than ever, and they are not shy about poking fun at specific, real, politicians as straw man stand ins.  Ultimately The First Purge gets past most of that in the third act and tries to make it all about family, which is not nearly as successful for them.

Like most origin stories, The First Purge lags a bit getting the action cooking.  We’re a full half hour in, bogged down with political rah-rah, before they get to the first official purging.   After that things start blowing up good, from toys to ice cream trucks to whole buildings.  Drones rain terror from the air.  Gangs run out of ammo and resort to hand tools in smoke filled chaos.

Loosely tying it together with a bit of half assed unrequited love and whether or not the most naive participant will be able to ‘get their purge on’ in the face of true evil leaves things a bit weak and unsatisfying.  Knowing that the greater evil is acting as the eye in the sky, with the end results fore-ordained makes it just that much cheaper.  Dmitri vows that he will keep fighting, but the three following Purge films show that is not to be. 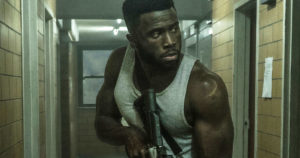 I saw The First Purge theatrically in a small shoebox theater with a decent enough 4k transfer.  This home 1080p rendition keeps all that was good about that with a slight resolution reduction, and exhibits the same limited palette that the theatrical run had.  For those so equipped, there is a UHD / HDR version also available, and I recommend you check out Tim’s review over here:

I did not notice any noise, ringing, or excessive grain at all.  It was fully up to speed for a 2018 action film release. 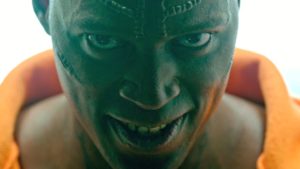 This is my second or third experience with DTS:X, and while I prefer the full overhead capability of Dolby Atmos, I found the First Purge soundtrack quite enveloping and engaging.  Gunshots are deep and well positioned, explosions are well rendered with good shakes, and the limited musical accompaniment spread nicely from the fronts to the rears.   There’s some good bass shake from the hip-hop tracks in particular.  Thumbs up all around. 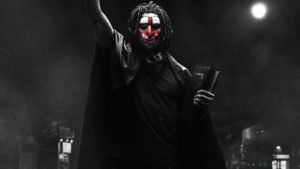 Deleted Scene(1:47):  This was how I expected the theatrical story to be resolved, and this scene must have been cut for having been too obvious =)  Smartly deleted if so.

A Radical Experiment(4:57):  Interviews with Blum and the crew.  Particularly revealing is the contrast between Skeletor on screen vice his mild appearing actor.

Bringing The Chaos(1:24): A way too short demo of how the cast did most of their own stunts, and an introduction to the Smilies.

The Masks of The First Purge(1:22):  Weaksauce intro to the new masks from this film vice the rest of the series. 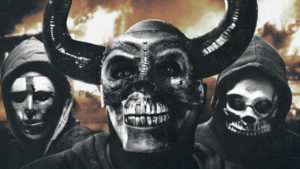 The First Purge is dragged down by obvious ties to existing political dialogue which have left this reviewer exhausted on one hand, and unable to discuss in detail without breaking HTF rules on the other.  It was a good ploy, and I’m sure it resonates with others, but it’s a big miss for me.

Also, the racial undertones leave me scratching my head: I get that they were going for building up an anti-hero with a drug dealing background, but the romance and family angles never paid off for me and I couldn’t see Nya really buying it either.

I loved the action sequences, and dug the chase through booby-trapped areas, but overall it never really hit it’s stride.  I wish Freddy (Steve Harris) and the other Kings would have gotten some more action too, their two scenes were good bookends but they could have been used better.

Overall The First Purge didn’t rise to the level of the first Purge for me, on any level, but still had some satisfying action. 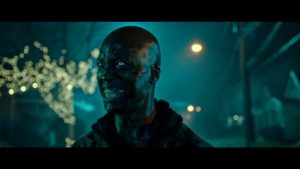 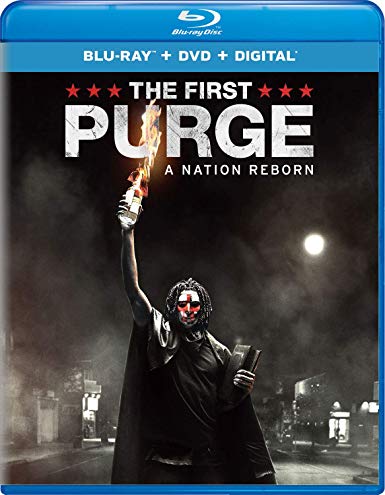