The unsolved murder of a female Belfast architect prompts London’s Metropolitan Police to initiate an investigative review under the direction of Detective Superintendent Stella Gibson (Gillian Anderson). Within days of her arrival, the killer takes another victim with a similar profile, leaving Assistant Chief Constable Burns (John Lynch) little choice but to put the more experienced Gibson in charge of an investigation that’s now a full-blown hunt for a serial killer. Identifying him will prove elusive, however, as he not only exhibits a keen understanding of police methods, but also a chilling degree of patience as he stalks and toys with his next victim. If Gibson and her team want to catch a break in the case, it will have to come from the most obscure of sources, since it seems unlikely the killer will be careless enough to make a mistake.

A British mystery featuring a driven, female police detective? Many will instantly think of Helen Mirren’s iconic turn as Jane Tennison in the celebrated series Prime Suspect, and try to find similarities. Indeed there are some shared themes, primarily regarding the gender politics and double standards that persist within the male-dominated world of law enforcement. But the narrative structure of The Fall differs quite significantly from most seasons of its forebear, in that we’re introduced to the killer (played by Jamie Dornan) and the double life he leads within minutes of being introduced to Gibson. Described by the Creator Allan Cubitt as a story of two hunters, the program plays out as a riveting fusion of police procedural and character study, with most of the intrigue coming from the antagonist as he juggles a life of incredible normalcy with one of utter depravity. While Anderson’s role embodies fewer dramatic extremes, a fine dimensionality to the character and Anderson’s convincing portrayal keep her on par with her opponent, making for an engrossing throughline over the five-episode season.

The Fall: Series 1 includes the following episodes that were distributed in the United States via Netflix in 2013:

The second season is also currently available on Blu-ray and the program’s third season is scheduled to premiere sometime this year.

Presented in its original aspect ratio of 1.78:1, the 1080p, AVC-encoded transfer features inky blacks, accurate contrast levels, and realistic color rendition. Detail is impeccable, though the more observant may note momentary swaths of noise in dim background areas. Still, the picture is often quite impressive and no doubt superior to either broadcast or streaming presentations.

Dialogue in the English language 5.1 DTS-HD Master Audio track is consistently crisp, detailed, and intelligible. Occasional surround effects provide the requisite environmental ambience, but given the dialogue-driven narrative, the center channel tends to dominate the 5.1 mix.

The Fall: Behind the Scenes (12:56, HD): The cast and crew discuss the story and its main characters.

The first installment of the BBC’s engrossing police drama starring Gillian Anderson and Jamie Dornan receives a satisfying high definition presentation. The special features are meager, but the merits of the program ultimately make that a minor quibble. The main issue right now is the title’s going price, which is high enough to deter all but the most devoted fans. I recommend picking it up when the sticker price hits the $20 mark. 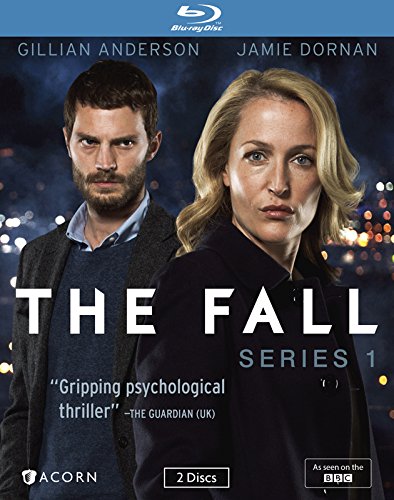