Forum List What's new Dark Style Change width
Log in Register
What's new Search
Menu
Log in
Register
Navigation
Install the app
More options
Dark Style
Close Menu
Posted on July 11, 2018 by Todd Erwin
You are using an out of date browser. It may not display this or other websites correctly.
You should upgrade or use an alternative browser.
Gritty, dark action thriller 4.5 Stars

To help promote the upcoming sequel, Sony has released The Equalizer on 4K UHD Blu-ray with upgraded picture and Dolby Atmos sound.

Denzel Washington plays Robert McCall, a man with a mysterious background working at Home Mart (the movie’s version of Home Depot) during the day as he helps Ralphie (Johnny Skourtis) train both physically and mentally for the store’s security guard position, spending his sleepless nights at the local 24 hour diner. It is there that he befriends Teri/Alina (Chloë Grace Moretz), an under-age prostitute for the Russian mob. When she is beaten and placed in ICU at the hospital for not following orders, McCall uses his skills as a trained assassin to dispense his own vigilante justice.

The Equalizer is very loosely based on the television series that ran on CBS from 1985 thru 1989 and starred Edward Woodward in the title role. Director Antoine Fuqua (Training Day, Magnificent Seven) and writer Richard Wenk (16 Blocks, Jack Reacher: Never Go Back) bring a much harder edge to the material, taking the concept in to very hard R-rated territory. I found that approach to be more realistic, although I must confess I may have only viewed one or two episodes of the original series back when it originally aired (my mentor, Robert Clark, Jr. was a huge fan of the show), as I found it somewhat hokey back in my late teens and  early 20s. It is the two leads, Washington as the “good” guy, and Marton Csokas (Klondike) as Teddy, the sociopath hired by Russian mob boss Pushkin (Vladimir Kulich) to clean house after McCall’s initial attack. Both actors excel at communicating on-screen even when they are doing what seems like nothing, allowing the audience to read the most acute facial expressions (or lack thereof) before all hell breaks loose. Granted, the story does become somewhat ludicrous as it approaches the final showdown (and who knew nail guns had that kind of precision and range?), but it is a fun ride, nonetheless.

The Equalizer was captured at 2.8K resolution on Arri Alexa Plus cameras, then completed as a 2K digital intermediate back in 2014. Sony has upscaled that to 2160p (retaining the film’s intended theatrical aspect ratio of 2.39:1), and then graded the image using HDR10 high dynamic range. The major boost on this 4K UHD release is in contrast when compared to the original 2014 Blu-ray release (included in this set). Much of this film takes place at night or in darkened buildings (especially the climax at Home Mart), where McCall is often hiding in the shadows. It is those sequences that show how high dynamic range can improve how an audience experiences a film, allowing us to see, rather subtly, that someone is lurking in the shadows, while on the 1080p Blu-ray, it is often a dark mess with lots of detail getting lost in those shadows. Colors are bit more natural, too, and slightly more vivid.

Sony, as usual, has included a new Dolby Atmos track on this 4K UHD release, but for some reason they have included a DTS-HD Master Audio 5.1 track as well, although the Blu-ray featured a DTS-HD Master Audio 7.1 track. Apparently the DTS-HD MA track on the 4K is now missing discrete rear surrounds. Regardless of your configuration, I recommend selecting the Dolby Atmos track, which does include a Dolby TrueHD 7.1 core. This is a track that starts out subtle in its use of object-based and discrete surround information, including mostly atmospheric sounds like distant street traffic and wind, adding in door knocks, inner thoughts, gun shots, sprinkler systems, and intercom announcements as the film reaches its climax. LFE presence is strong but never overbearing or boomy, nor is it ever anemic. Dialogue is clear and understandable throughout.

Surprise – the 4K UHD Blu-ray disc contains some exclusive extras that are new and only on this disc. To round things out, the original 2014 Blu-ray is also included with its own set of extras.

Joining Forces Again: Denzel Washington and Antoine Fuqua (1080p; 4:52): A look at the second teaming of the actor and director.

Denzel Washington: A Different Kind of Superhero (1080p; 6:56): The cast and crew discuss working with Washington and his preparedness for the role.

One Man Army: Training and Fighting (1080p; 6:40): A look at designing the action sequences by using almost no stunt doubles for Denzel Washington.

Home Mart: Taking Care of Business One Bolt at a Time (1080p; 2:11): A tongue-in-cheek promo for Home Mart’s Employee of the Month Robert McCall.

Photo Gallery (1080p): A selection of 52 production stills from the movie.

Digital Copy: An insert contains a code to redeem a digital copy on Movies Anywhere. I redeemed my code on Vudu, which unfortunately gave me  only HD copies on Vudu, FandangoNow, Amazon, and Google Play.

Releasing The Equalizer on 4K UHD Blu-ray is a great primer for the sequel opening in theaters later this month. Video and Audio are spectacular, and it’s nice to see some new features included on the 4K UHD disc.

Thank you for this fine review as I was on the fence about buying this 4K title, but not anymore. I'm hoping to buy it next week.
You must log in or register to reply here. 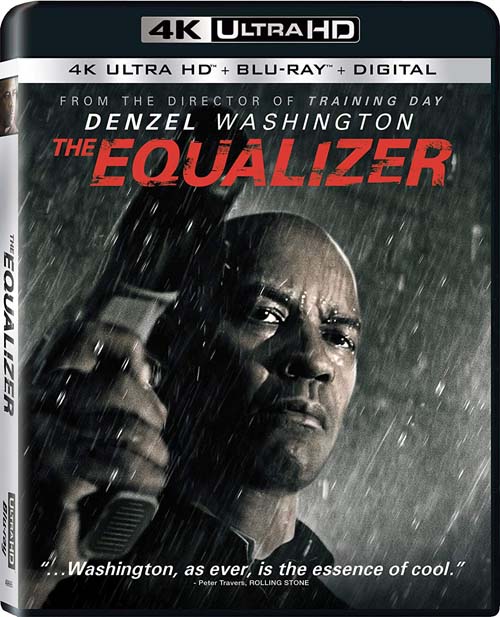