Denzel Washington and Director Antoine Fuqua team again for the sequel The Equalizer 2, a film that had some promise but just comes short of failing.

Robert McCall (Denzel Washington) continues to help others who have been wronged and deserve justice as he has switched from his day job working at Home Mart to a hired driver for Lyft, freeing a child from her abusive father and returning her to her mother, getting justice for a young woman who was gang raped and dumped in his car, helping a Holocaust survivor find his long-lost sister. When his former handler and friend, Susan Plummer (Melissa Leo) is brutally murdered in Brussels in what appears to be a hotel room robbery gone wrong, McCall comes out of hiding and asks his former partner, Dave York (Pedro Pascal) to help investigate. It is very obvious where this is all going, and director Antoine Fuqua and screenwriter Richard Wenk don’t put much effort in trying to hide it. We know rather quickly who is behind all of this, yet, somehow, McCall is fairly clueless as very obvious indications are dictated right in front of his eyes. What is sorely lacking in this sequel is the emotional depth and interesting villain that helped the first film to succeed. McCall’s main mission lacks in empathy, mostly because we still know very little about Susan or her personal connection with McCall (unlike the relationship between McCall and Alina in the first film which largely propelled the tension and drama). The big finale is a complete letdown, too, as a hurricane a finally approaches Boston (the radio and TV have been warning us if its impending doom for much of the running time) and devastates what I assume is supposed to be Martha’s Vineyard as York and his mercs try to take down McCall.

The Equalizer 2 was captured at 2.8k resolution on Arri Alexa Mini and XT cameras, and was likely completed as a 2K digital intermediate. Sony’s 2160p HEVC-encoded transfer presented the film in its theatrical aspect ratio of 2.40:1 with HDR10 high dynamic range. When compared to the included 1080p Blu-ray, the differences are minimal. Contrast is slightly improved with marginally deeper blacks, colors contain a slightly wider and more natural gamut of shades, and overall clarity is slightly improved and more defined.

The Dolby Atmos track is a noticeable improvement over the stellar DTS-HD MA 7.1 track found on the Blu-ray. This track has a much tighter and deeper low end, so much so that some viewers may want to turn the subwoofer down just a notch for this release. The track is also more immersive with the use of heights, particularly during the opening train sequence (you can hear the wind rustling against the roof of the train) and all of the atmospherics during the big finale during the hurricane. Discrete sounds are placed more precisely and travel more seamlessly from speaker to speaker. Dialogue is clear and understandable throughout.

The UHD disc contains no special features whatsoever (other than forced trailers in UHD for Sicario: Day of the Soldado, The Girl in the Spider’s Web, and Venom). All of the special features can be found on the included Blu-ray edition of the film.

Retribution Mode (1080p; 139:12): Antoine Fuqua sure loves these interactive commentary and behind-the-scenes versions of his movies. He and Denzel Washington offer discussion and footage during cut-aways. Realistically, there is only about 18 minutes total of this kind of footage and could have easily been included as a stand alone featurette rather than forcing the viewer to watch the entire movie again. Retribution Mode can be selected from the Play Movie subheading rather than Special Features.

Deleted & Extended Scenes (1080p; 23:18): Eleven scenes are included – Vegan, I’ve Got Your Name, I’m a High Level Paid Government Assassin, The Book, Grant Me the Serenity, Let Me Show You Something, I Wanna Get Outta Here, Watching, Come On In, All Clear, and Show Yourself.

Denzel as McCall: Round Two (1080p; 7:00): A look at Washington’s character, performance, and the fact that this is his first sequel.

Seconds Till Death: Scene Breakdown (1080p; 5:15): A look at how the action sequences were created.

The Equalizer 2 is a rather disappointing and predictable sequel. Sony’s UHD release offers a marginally better video presentation, but the only real reason to pick up this edition is for the Dolby Atmos track. 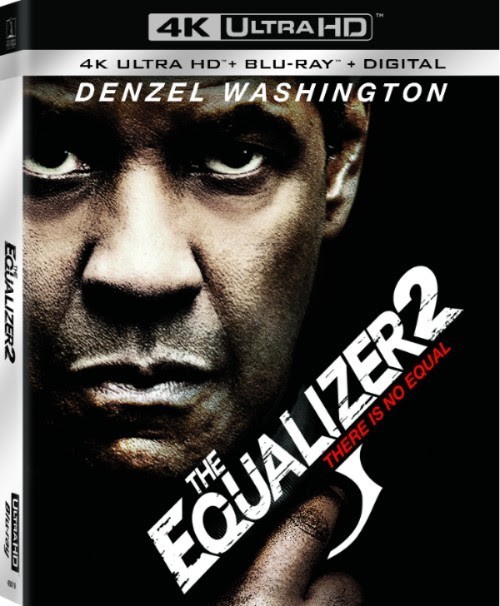