Forum List What's new Dark Style Change width
Log in Register
What's new Search
Menu
Log in
Register
Navigation
Install the app
More options
Dark Style
Close Menu
Posted on November 4, 2020 by t1g3r5fan
You are using an out of date browser. It may not display this or other websites correctly.
You should upgrade or use an alternative browser.

After the auspicious debut of Eraserhead (1977), David Lynch was looking for a follow up project to the surreal film. By chance, Lynch came to the attention of comedy legend Mel Brooks, who was looking for a director for a film to help launch his new film production company. The end result was The Elephant Man, a drama rooted in the real life case of Joseph Merrick. Originally released on DVD by Paramount, Criterion has given the movie its long awaited Blu-ray debut.

In late 19th Century Victorian England, Joseph “John” Merrick (John Hurt) is living a life on the freak show circuit under the thumb of the sociopathic Mr. Bytes (Freddie Jones). However, his circumstances change when noted surgeon Dr. Frederick Treves (Anthony Hopkins) takes an interest in John following a private showing; after examining him, he comes to discover that behind all the physical deformities lies a man of great intelligence and gentle nature. As John’s stature rises in Victorian society, Treves must also confront the very real possibility that he may just be no better or worse than Bytes in helping Merrick; John also comes to realize the great inner courage he never knew he had.

In the long career of David Lynch, The Elephant Man was more than just his first mainstream movie – it was also his first fully realized movie that bore many of his distinctive touches. Like Eraserhead, the film was shot in black and white, but here Lynch has the talents of cinematographer Freddie Francis and art director Stuart Craig at his disposal; together, they create an intoxicating atmosphere befitting of both Victorian London and the stories of Charles Dickens. While the movie does take a few liberties on the lives of both Merrick and Treves, the story stays true to its core of finding the human dignity lying beneath the skin; a lot of that owes to the top notch cast giving stellar performances. Finally – and best of all – Lynch never stoops to using sappy sentimentality to get his point across about the plight Merrick faced in his life; there’s genuine pathos throughout without resorting to knee jerk emotions at every turn. All in all, The Elephant Man helped to cement David Lynch as both a master stylist and storyteller whose unique outlook on life in cinema would soon come to full flower in the second half of the 1980’s.

As the surgeon who discovers Joseph Merrick and volunteers to help him, Anthony Hopkins turns in one of the best performances of his career; he, of course, would go on to Oscar anointed immortality as Hannibal Lecter in The Silence of the Lambs (1991). John Hurt arguably gives the performance of his career as Merrick (he was nominated for a Best Actor Oscar here); this performance – along with the ill-fated astronaut Kane in Alien (1979) – has helped to cement his place in pop culture lore. Among supporting parts, standouts here include John Gielgud as the head of the London Hospital Francis Carr Gomm, Wendy Hiller as the head nurse of the hospital, Freddie Jones as the sadistic ringmaster Bytes, and Anne Bancroft as actress Madge Kendal. Rounding out the cast here are Michael Elphick as the duplicitous night porter, Hannah Gordon as Ann Treves, Dexter Fletcher as Bytes’ boy at the freak show, Phoebe Nicholls and Lydia Lisle as Mary Jane Merrick (the latter in film footage, the former in photographic still), Lesley Dunlop and Nula Conwell as Merrick’s nurses at the hospital, Helen Ryan as Alexandra, the Princess of Wales, and Kenny Baker in one of his non C3PO roles as a plumed dwarf.

The film is presented in its original 2:35:1 aspect ratio, taken from a brand new 4K digital restoration performed by Studiocanal. Film grain is organic with fine details, shadows and gray scale all given faithful representations; there’s very little to no instances of problems like dirt, dust, scratches, tears or reel markers present here. Overall, this is likely the best the movie will ever look on home video, making this a major improvement over previous home video releases including the 2001 Paramount DVD.

The film’s original stereo soundtrack is presented on a PCM track for this release, supervised and approved by Lynch. Dialogue is strong and clear, with the sound mix and John Morris’ haunting Oscar nominated score also given faithful representation as well; there’s minimal to no instances of issues like crackling, hissing, popping or distortion present here. Overall, this release likely represents the best the movie will ever sound on home video, blowing the Paramount DVD out of the water in this department.

Room to Dream reading (70 min.) – David Lynch and author Kristine McKenna read excerpts from the book they co-wrote, extensively covering the movie and its production.

Photographing The Elephant Man (25:19) – In this brand new interview, still photographer Frank Connor talks about his career and the decision to have the production stills photographed in black and white rather than in color.

The Terrible Elephant Man Revealed (30:11) – This archival featurette, carried over from the 2001 Paramount DVD, goes over the movie’s production and its challenges; among those interviewed include executive producer Mel Brooks, Sanger, Hurt, Tucker and cinematographer Freddie Francis.

Joseph Merrick: The Real Elephant Man (19:50) – This 2005 BBC program has London Hospital museum curator Jonathan Evans talking about the life of Merrick and what the movie got right in bringing his story to the screen.

Winning over both critics and audiences alike, The Elephant Man is both a straightforward and significant work of art by the usually surreal David Lynch. Criterion has delivered one of their best releases of the year with a terrific HD transfer and a tremendous slate of special features diving into the making of the movie and the life of its real life subject. Very highly recommended and well worth upgrading from the Paramount DVD.

As good as the video is, the picture on the 4K disc is even better.
C

The 4K edition was released in Europe by Studio Canal. The American distribution rights are held by Paramount, who licensed the film to Criterion for Blu-ray. If Paramount has any plans to prepare their own 4K edition, they haven't hinted at it.

4K discs aren't region coded, so there's no reason not to get the European release.
C

Worth said:
4K discs aren't region coded, so there's no reason not to get the European release.
Click to expand...

Good point to bring up. I do own many EU & UK Blu's as I'm region free (Including the 2014 Studio Canal Elephant Man), but the US$50 price tag for this one? Not for me.
J

$50 was for the initial release with the fancy pop-up packaging. A streamlined edition in a standard keepcase will be released this coming week. Zavvi has it for $26.49 USD. 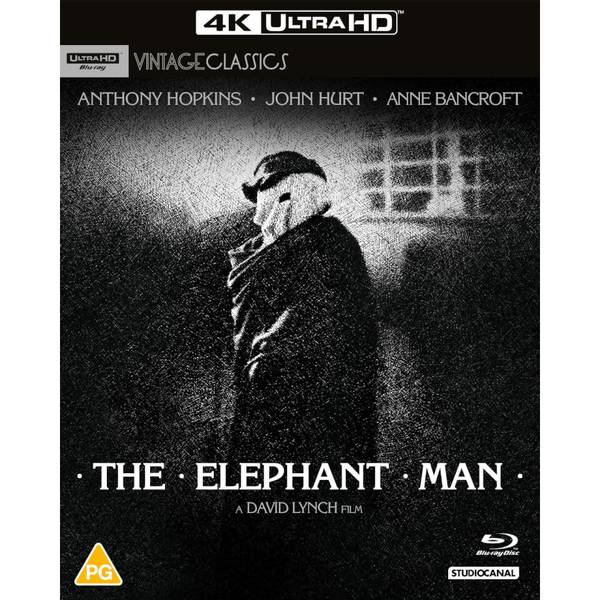 Barnes and Noble is no longer honoring members 10% discount on top of Criterion sale? I was just refused at the check out counter- was told this was a corporate decision. Anyone know more or can confirm- and like sincewhen? I asked and they said Jan but I said not true as the last sale in July it worked.

JoshZ said:
$50 was for the initial release with the fancy pop-up packaging. A streamlined edition in a standard keepcase will be released this coming week. Zavvi has it for $26.49 USD. I’m not surprised. I have not been able to find any standard case editions listed in Europe. Amazon UK and Germany list only the giant deluxe edition, Amazon France lists a steel book edition also. If you like steel books it works out to $42 US.

noel aguirre said:
Barnes and Noble is no longer honoring members 10% discount on top of Criterion sale? I was just refused at the check out counter- was told this was a corporate decision. Anyone know more or can confirm- and like sincewhen? I asked and they said Jan but I said not true as the last sale in July it worked.
Click to expand...

Yeah, the discount is no longer applied starting with this most recent sale.
J

That stinks. It was still reporting as available when I posted the link.

JoshZ said:
That stinks. It was still reporting as available when I posted the link.
Click to expand...

It does stink, but on the other hand it's great to see a 4K disc release of a catalog title fly off the shelves and sell out.
J

dpippel said:
It does stink, but on the other hand it's great to see a 4K disc release of a catalog title fly off the shelves and sell out.
Click to expand...

It's strange that no other retailers listed this keepcase edition. I wonder if Zavvi jumped the gun with the listing, and flipped it to "Sold Out" when they realized they wouldn't be getting any stock? That sort of thing has happened before.

Both the SteelBook and the Collector's Edition with the fancy packaging were marketed as limited edition items. Zavvi has product images of the keepcase, so it must be an actual planned product, not something Zavvi made up. I expect that this will get cleared up eventually, perhaps with a new street date for the keepcase.

TravisR said:
Yeah, the discount is no longer applied starting with this most recent sale.
Click to expand...

As an FYI, Amazon has been price matching B&N on most of the Criterions, and including an additional coupon discount for Prime subscribers once the item is in the cart. So they’re basically giving Prime members the same price as if B&N were giving an additional member discount.

Josh Steinberg said:
As an FYI, Amazon has been price matching B&N on most of the Criterions, and including an additional coupon discount for Prime subscribers once the item is in the cart. So they’re basically giving Prime members the same price as if B&N were giving an additional member discount.
Click to expand...

Nice and I need to check this out pronto. A code pops in auto?
UPDATE Sorry don’t see the code and I’m a Prime subscriber?

No code and it doesn’t seem to be consistent either by item or time. Some of the Criterions in my cart have a button underneath the price offering a $1.60 - $2 discount depending on item, you just have to press button to clip coupon. It was on some items, then disappeared, then reappeared. So you might have to throw it in your cart and if it’s not offered, check back throughout the day. And it may have been a temporary offer.

Don't spend it all on one girl !

B&N will lose a lot of member$hips now as that was the only reason for me and others to even get one. I would never buy a physical book.
Good luck B&N.
You must log in or register to reply here.