The second film in the Divergent series, Insurgent, arrives on 4K UHD from Lionsgate. For those that own the previous Blu-ray release, is it worth upgrading?

Picking up where Divergent left off, Insurgent has our heroine Tris (Shailene Woodley) on the run and seeking asylum with Four (Theo James), Peter (Miles Teller), and her brother Caleb (Ansel Elgort) in the peace-loving faction territory of Amity, led by Johanna (Octavia Spencer). But power-hungry Jeanine (Kate Winslet) has declared martial law on all Divergents, with her Dauntless soldiers led by Max (Mekhi Phifer) and Eric (Jai Courtney) on the hunt to capture Tris, hoping to use her to unlock a recovered stone found in Tris’s parents’ house that contains a secret message from the city’s founders. When Amity is attacked, Tris and her friends escape to the Factionless, led by Evelyn (Naomi Watts), who is trying to lead a revolt against Jeanine and the Erudites. Tris and Four think that is suicide, so instead turn themselves into the justice faction of Candor, led by Jack Kang (Daniel Dae Kim). Through the use of a truth serum, Kang learns of Jeanine’s true intentions and offers Tris and Four sanctuary. This becomes short-lived when Max and Eric arrive with troops, armed with pellet guns that have the ability to not only knock non-Divergents unconscious but control them as well. Tris and Four escape with several former Dauntless soldiers, willing to fight with the Factionless to overthrow Jeanine. But Jeanine takes control of three of the former Dauntless soldiers, including Tris’ friend Christina (Zoe Kravitz), warning Tris that if she doesn’t turn herself in to Erudite, many will suffer the same fate as the three who are about to jump to their deaths. Tris and Tori (Maggie Q) save Christina and one other Dauntless, but not before a third falls and dies. Feeling guilty, Tris sneaks away and turns herself over to Jeanine, who puts Tris into a simulator, forcing her to pass tests for all five factions and opening the box. However, the message is not what Jeanine was expecting.

As novels, the Divergent series are acceptable teen pulp science fiction set in a post-apocalyptic world. As movies, they feel like retreads of Twilight, The Hunger Games, and many other movies based on popular teen-targeted novels. No new ground is really covered here, and much of the film is forgettable. That’s not to say it isn’t entertaining. Shailene Woodley’s Tris has a lot on her mind, having had to kill a close friend to save herself, watch her parents killed before her eyes, and witnessing genocide as her home faction of Abnegation is destroyed by brainwashed Dauntless soldiers under the control of Erudite leader Jeanine. And all of that occurred in the first film, Divergent. That’s a heavy burden for a teenage girl to carry, and Tris has to handle the aftermath of those events throughout Insurgent, and Woodley manages to pull it off with enough pathos to make it mostly believable. Winslet is obviously having fun playing the villainous Jeanine, and does so without ever chewing the scenery, which is a major accomplishment in itself for a movie of this type. Robert Schwentke (RED, R.I.P.D.) replaces Neil Burger (Limitless, The Illusionist) in the director’s chair for this (and the next) outing, and keeps the film moving at a fairly brisk pace, even if there is little to no suspense, due in part to the predictability of the screenplay and its source material.

Although Insurgent was completed as a 2K digital intermediate, this 4K upscale with high dynamic range is a definite improvement over the 1080p Blu-ray. Colors are more vibrant and natural, especially flesh tones. Contrast is also vastly improved, with deeper blacks that reveal more subtle details in the dark interiors of the Factionless hideout (something the Blu-ray struggled with). The 4K UHD also offers greater detail, especially noticeable in beard stubble on actors faces and fabric patterns in costumes.

Lionsgate has included the same Dolby Atmos soundtrack found on the Blu-ray edition, which will default to Dolby TrueHD 7.1 on systems that are not Atmos capable. This is a reference-quality track, even when folded down to 5.1 by my Marantz SR5008 receiver. Dialogue is always clear and concise, often directed to the center channel. Discrete effects are well-placed throughout the room, even the occasional leaf rustling during some of the quieter moments in Amity, providing an immersive listening experience.

As with most of Lionsgate’s 4K UHD releases, there are no bonus features on the 4K disc. Instead, the Blu-ray release has been included here, which contains a nice set of features.

Audio Commentary with Producers Doug Wick and Lucy Fisher: The two producers offer a lot of information about the film, such as moving the production to Atlanta to take advantage of the tax incentives and the challenges of finding locations that look like Chicago, which locations had to be built from scratch, how the movie is different from the book, but there are also long gaps of silence, so listener beware.

Insurgent Unlocked: The Ultimate Behind the Scenes Access (1080p; 1:56:32): This is a picture-in-picture documentary on the making of the film, with the behind the scenes footage and interviews filling the screen, and much of the movie playing in a window at the bottom left or right corner. This feature can be viewed as a whole, or in individual chunks covering various aspects of production: Building a Bigger World (11:05), Creating the Big Screen Experience (14:01), Exploring the Factionless (13:52), From Factionless to Candor (14:30), A New Landscape of Weapons and Stunts (16:33), Composers and Simulators (17:33), A Fight to the Finish (28:35).

From Divergent to Insurgent (1080p; 5:09): The cast and crew discuss the story line and differences between the two movies.

Diverging: Adapting Insurgent to the Screen (1080p; 4:00): Author Veronica Roth and the producers discuss the changes made to the storyline to better accommodate for the big screen.

Fans who have not purchased the previous Blu-ray edition may want to pick up this 4K UHD version instead, with its increased resolution, color gamut, and contrast, even if they don’t have a UHD display and player as a way to future proof themselves. 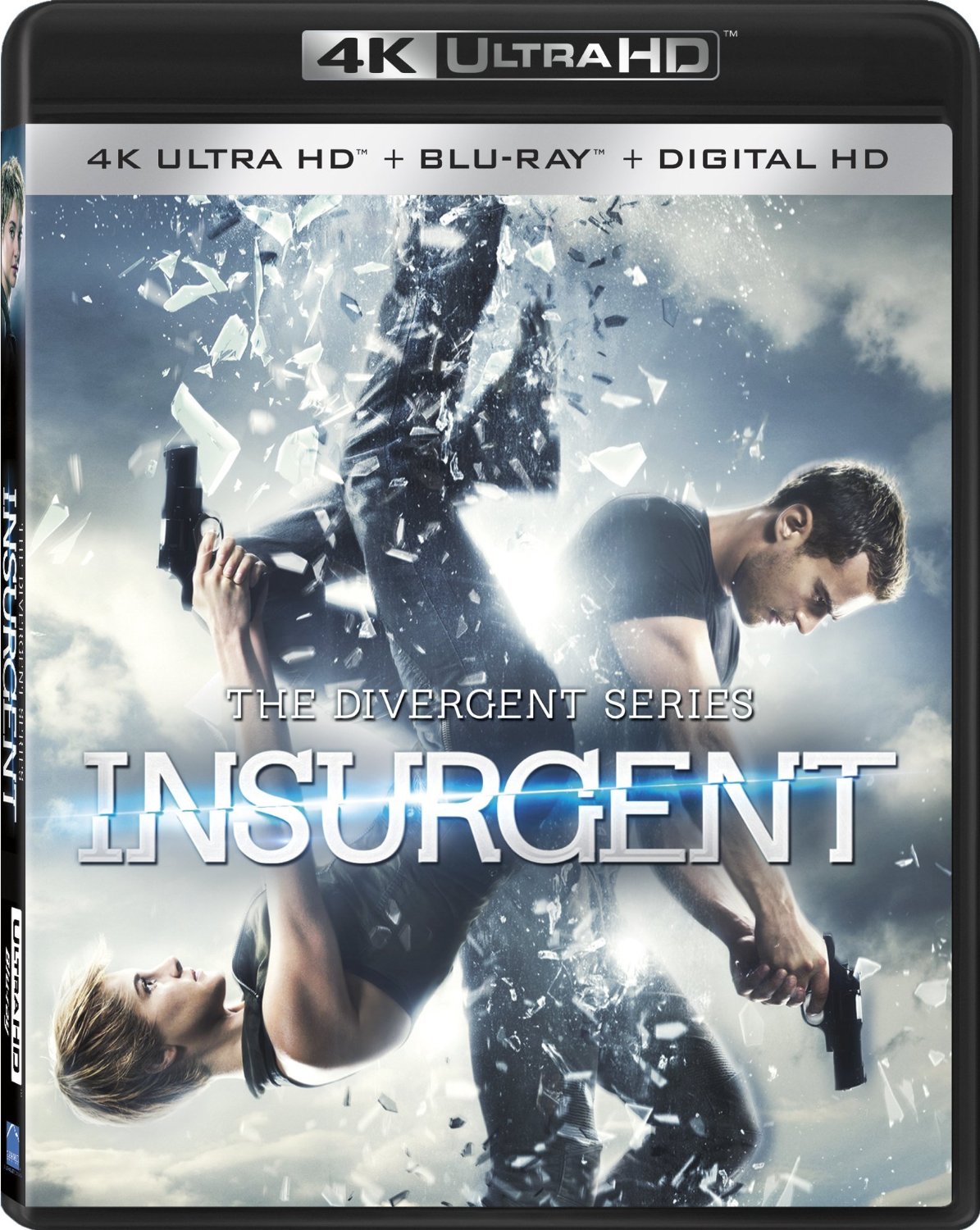