Forum List What's new Dark Style Change width
Log in Register
What's new Search
Menu
Log in
Register
Navigation
Install the app
More options
Dark Style
Close Menu
Posted on May 12, 2019 by t1g3r5fan
You are using an out of date browser. It may not display this or other websites correctly.
You should upgrade or use an alternative browser.
Cult Universal Sci-Fi debuts on Blu-ray 3.5 Stars

Following the success of It Came from Outer Space (1953), Universal-International had producer William Alland contribute more science fiction entries for the studio during the decade; among these efforts included The Creature from the Black Lagoon (1954), its sequels Revenge of the Creature (1955) and The Creature Walks Among Us (1956), This Island Earth (1955), and Tarantula (1955). Coming in at the tail end of the cycle, The Deadly Mantis is a lower tiered affair compared to the previous Alland productions, but has garnered a cult following in the years since. Shout Factory, via the Scream sub label, has given the movie it’s Blu-ray debut here.

Somewhere in the South Pacific, a volcano erupts which triggers a reaction in the Arctic region: an iceberg containing a giant preying mantis is freed. Shortly thereafter, the Air Force investigates mysterious incidents involving the disappearances of servicemen and destruction of planes and bases. With the help of Dr. Nedrick Jackson (William Hopper), Col. Joe Parkman (Craig Stevens) realizes that the giant mantis is heading south towards Washington D.C. and New York City and that the creature must be stopped at all costs before complete calamity engulfs the entire Eastern Seaboard.

Although it certainly ranks among the lesser efforts in Universal’s run of sci-fi movies, The Deadly Mantis has some solid attributes that have aided in its cult status. For one part, the special effects are actually very good and effectively deployed throughout; certainly better than another sci-fi movie that came out the same year as The Deadly Mantis – The Giant Claw. As one of the last three William Alland productions to utilize a great deal of stock footage, the use of it is a little less jarring than The Mole People, but still not quite as smooth in their use as The Land Unknown. However, the major flaw with the movie is an abundance of expository scenes – even in its brief running time – that tend to bog down the action; some discretion in streamlining a few of these scenes could’ve helped. Warts and all, the movie still has some entertainment value but it’s still leagues away from previous giant monster efforts like Them! (1954) and The Beast from 20,000 Fathoms (1953).

Craig Stevens is solid if somewhat unremarkable in the lead as Col. Joe Parkman; just one year after the release of this movie, he would land his most notable role – the private eye Peter Gunn in the eponymously titled TV series. As Dr. Jackson, William Hopper also is quite solid despite the shortcomings in the script; the same year the move came out, he would begin a long run on TV as the private detective Paul Drake in Perry Mason. Alix Talton, who had preivously played bit parts, gets a rare chance to play the leading lady and does alright. A fixture of bad guy roles on film and a frequent presence on the radio, Donald Randolph does well in playing the Major General tasked with stopping the giant mantis. Other notable appearances include Pat Conroy as the sergeant who discovers a large piece of the mantis broken off, Florenz Ames as the professor who refers the Major General to Dr. Jackson, Bing Russell (Kurt’s dad) as a state trooper, Harry Tyler as the busybody spectator in the Manhattan climax, and Marvin Miller – the voice of Robby the Robot – as the film’s narrator.

The film’s original 1:85:1 aspect ratio is preserved on this HD transfer, taken from a 2K scan of the original film elements. Film grain is organic, but density changes are noticeable in the shifts from the studio shot scenes to the stock footage utilized for the movie. Grayscale is solid throughout and there are minimal instances of age related artifacts in the studio shot scenes compared to the stock footage; overall, this marks a noticeable improvement over previous home video versions of the movie.

The original mono soundtrack is presented on a DTS-HD Master Audio track for this release. Dialogue is strong and clear, along with the sound effects, and the score – composed by an uncredited Irving Gertz and William Lava, with some Henry Mancini stock music – has strong ambiance and fidelity; there is a very brief dropout around the 38 minute mark, but hardly enough to distract from viewing. Overall, another improvement over previous home video editions.

Commentary by film historians Tom Weaver and David Schecter – Though Schecter does contribute to this commentary track (although he doesn’t make an appearance until halfway through the movie to discuss the film’s score), this is mostly Weaver’s track all the way; he delivers the information on the production as well as some other interesting details with great enthusiasm and only a few pauses along the way.

Mystery Science Theater 3000 episode “The Deadly Mantis” (1:32:16) – The episode from the eighth season of the long running comedy series is presented in standard definition.

Still Gallery (7:56) – 85 production stills, advertising, and conceptual art by Ken Sawyer is presented here, with some provided by Brett Cameron.

While it certainly won’t win any awards for greatness, The Deadly Mantis has garnered a cult following among fans of the science fiction genre over the years. Shout Factory has to be commended for giving this cult favorite a solid Blu-ray, with strong marks in both the visual and audio department as well as including the MST3K episode to go with a new and informative commentary. It’s worth upgrading from the previous Universal DVD for those two special features alone.

I will be getting this as soon as it fits the budget. I love cheese like this one.
You must log in or register to reply here. 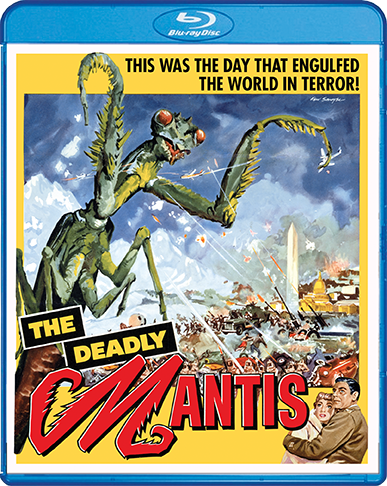