Forum List What's new Dark Style Change width
Log in Register
What's new Search
Menu
Log in
Register
Navigation
Install the app
More options
Dark Style
Close Menu
Posted on September 19, 2019 by Todd Erwin
You are using an out of date browser. It may not display this or other websites correctly.
You should upgrade or use an alternative browser.
Too offbeat for its own good 3 Stars

Jim Jaramusch has made some odd movies, and The Dead Don’t Die is no exception.

In Centerville, Pennsylvania, strange things are afoot. Animals are disappearing. Nighttime approaches much, much later than it normally does. Radio and television transmissions are frequently interrupted with static. Cell phone reception has all but disappeared and batteries are suddenly drained. Police Chief Cliff Robertson (Bill Murray) and Officer Ronnie Peterson (Adam Driver) begin to notice these things while out on patrol, and are later joined by fellow Officer Mindy Morrison (Chloë Sevigny). When the local diner is attacked by two zombies, Ronnie begins reciting his catch phrase, “This isn’t going to end well.” Hermit Bob (Tom Waits) calls it quite early after spotting mounds of ants “all jacked up like it was the end of the world.”

The Dead Don’t Die moves incredibly slow, partially because nearly every character speaks slowly in a droll deadpan. There are some funny moments to the film, but there are plenty of really odd ones, too. Tilda Swinton plays the town’s new mortician from Scotland, who is constantly wielding a samurai sword. Steve Buscemi plays a racist farmer. Danny Glover plays the local hardware store owner. Caleb Landry Jones plays the owner of the gas station and comic book store. The movie even occasionally tries to break the fourth wall with Ronnie letting us know that Sturgill Simpson’s The Dead Don’t Die is the movie’s theme song (the song is played ad nauseam as a running gag) and that he has even read the entire script, hence his catch phrase. Director Jim Jaramusch’s movies are an acquired taste and not for everyone, and frankly I kind of fall into that category, despite my fondness for quirky films. He’s just a bit too quirky for me.

The Dead Don’t Die was captured at 4.5k and 3.4k resolutions on the Arri Alexa LF camera, then completed as a 4K digital intermediate. Universal has released the film on Blu-ray, forgoing a UHD physical release (it is available in 4K digitally). The AVC-encoded 1080p transfer presents the film in the 1.78:1 aspect ratio. This is another stellar Blu-ray from Universal, but I wouldn’t call it demo-worthy or reference level either. Colors are (purposefully) subdued but otherwise appear natural. Detail is excellent from the beard stubble on Adam Driver’s face to the individual pine needles in the ant mounds in the woods. Black levels are very good, providing nice shadow details during the brief night time scenes.

The movie’s DTS-HD Master Audio 5.1 track is commendable, providing clear and understandable dialogue and exceptional fidelity. Surrounds are used for atmospherics and music extension, adding in some discrete effects during the zombie attacks, particularly when they attack the police car near the end of the film. LFE is satisfactory, not really adding any additional emphasis to things like gunshots.

The disc contains a handful of very brief featurettes that really don’t say much about the making of the film.

Bill Murray: Zombie Hunting Action Star (1080p; 1:21): Murray is interviewed, pointing out that this is not his first zombie movie.

Behind the Scenes of “The Dead Don’t Die” (1080i; 5:16): Very brief behind the scenes vignettes, including Zombie Tai Chi, Growl Practice, A Spin Around Set, Craft Services, Undead Symphony and Finger Food.

I like most of the cast members in this film, but have never been a fan of director Jim Jaramusch. The film moves sluggishly and the jokes feel a bit smug. The presentation is very good, though.

This is a movie I wanted to be good. I haven’t seen, but all the reviews are mediocre at best. I wonder if it will come out in 4K?

Johnny Angell said:
This is a movie I wanted to be good. I haven’t seen, but all the reviews are mediocre at best. I wonder if it will come out in 4K?
Click to expand...

It's available in 4K on digital, but no HDR and still only 5.1 audio.

Todd Erwin said:
It's available in 4K on digital, but no HDR and still only 5.1 audio.
Click to expand...

It has HDR now and it's on sale for $9.99 on iTunes.
You must log in or register to reply here. 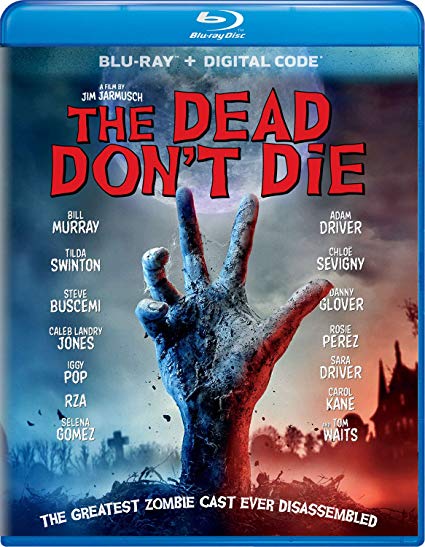