Forum List What's new Dark Style Change width
Log in Register
What's new Search
Menu
Log in
Register
Navigation
Install the app
More options
Dark Style
Close Menu
Posted on September 5, 2020 by Timothy Bodzioney
You are using an out of date browser. It may not display this or other websites correctly.
You should upgrade or use an alternative browser.
Highly Recommended low budget British genre film 4 Stars

Kino has released Joesph Losey’s excellent low-budget prison drama The Criminal on Blu Ray.  Produced in 1960, The Criminal is an unsentimental, sometimes brutal look at the post-war English underworld.  Losey is an eclectic filmmaker and the film combines elements from several genres and sources.  Thematically similar to American crime movies the film depicts the shift in criminal power from the individual to the more business-like operation of organized crime.  Stylistically, The Criminal is closer to the then-current New Wave films taking Europe by storm.

Johnny Bannion (Stanley Baker) is a career criminal finishing a stretch in prison.  The film opens the day before Bannion’s release.  Bannion is a larger than life figure in the prison.  Known, respected, and feared by all fellow convicts, Bannion is underworld nobility.

Losey and screenwriter Alun Owun quickly and concisely introduce the inmates.  We quickly learn why but not what put most of the men in prison as all are in some form or another, outcasts.  Bannion’s combination of strength, independence, and intelligence separates him from the other inmates.

Only one other man is more powerful, Frank Saffron (Gregoire Aslan), the head of a British crime syndicate.  Saffron controls his empire from within the prison walls.  Nothing goes on inside or outside of the prison without escaping Saffron’s attention.

Nobody is waiting for Bannion at the prison gate upon his release.  After walking a few blocks Bannion is greeted by slippery gangmate Mike Carter (Sam Wannamaker).  Carter is a fastidiously dressed fop sporting a cigarette holder.  The tension between the two is instantaneously apparent as Carter is the weaselly type who basks in the financial rewards, as well as the glamor of crime, but somehow always knows how to evade the consequences.  It’s quickly established that Bannion took the fall for a caper committed by the gang and expects to be rewarded for his silence.

Carter tells Bannion that the boys have planned a coming-out party for Bannion (at Bannion’s apartment) and fronts him 200 pounds (not telling Bannion that the money was fronted by Saffron) to tide him over.  Bannion contemptuously hijacks Carter’s expensive coat and vehicle leaving Carter on his own.

When Bannion arrives at his apartment he finds the party in full swing.  The apartment is chaotic with criminals and hangers-on, eager to indulge at the expense of others.  The design of the apartment is amusing as it could be straight from the pages of Playboy magazine, circa 1960.  The apartment decor is a collection of then-current clichés of what constitutes a worldly swinging, sophisticated man of the era – ironic because Bannion has probably never been outside of London, other than to prison.

Johnny does not appear to be enjoying the company and the party quickly comes to a crashing conclusion when Johnny’s discarded ex-girlfriend Maggie (Jill Bennett) appears and makes a scene.

Alone, Johnny settles in and readies himself for a session of tanning under a portable sun lamp only to find a naked woman hiding in his bed.  The exotic and foreign Suzanne (Margit Saad) is a roommate of Maggie’s who has decided to stake out her roommate’s local celebrity ex-boyfriend.  Though initially uninterested, Johnny quickly succumbs to Suzanne’s foreign allure.

Johnny wastes no time in planning a racetrack heist based on a tip from a fellow inmate.  Johnny meets with his old gang in a park to go over the details only to learn from Carter that while he was in prison Saffron’s influence has increased and his cut along with it.  Johnny balks but the matter goes unresolved.

The heist goes smoothly, and Johnny buries the money, with the intention of stiffing Saffron of his cut, in a rural field until things cool down.  Little does Johnny know that the scorned Maggie has gone to the police saying that Johnny is up to something, which is confirmed by another unnamed informer, probably Carter, and Johnny is met at his apartment by a familiar, almost friendly detective.

Johnny unwisely pocketed a bundle of the stolen cash which is found on him by the detectives.  Johnny immediately goes back to prison, where the bulk of the remainder of the movie, until the climax, takes place as Johnny and Saffron engage in a game of cat and mouse over the racetrack booty.

The Criminal comes after a number of famous heist movies (The Asphalt Jungle, Rififi, The Killing) that go into great detail the planning and execution of the robberies.  In the audio commentary, Kat Ellinger states that this was also included in Jimmy Sangster’s original script.  Ellinger states that the uncredited Sangster’s original draft was a mash-up of and included all of the prison movie clichés found in earlier Warners prison films of the 30s and 40s.  According to Ellinger, both Losey and star Baker rejected this draft as too derivative and brought in promising BBC scriptwriter Alun Owun to do a rewrite.

Owun’s tight script focuses not on action, but on character and class structure (in and out of prison) in post-war England – a favorite theme of Losey in his British films.  It’s almost as if Losey and Owun crossed a James Cagney gangster movie with a Kitchen Sink drama.  Stanley Baker’s Bannion is the criminal version of The Angry Young Man.

Bannion is smart, but uneducated; the first scene of Bannion and Carter together illustrates Bannion’s talent for figures.  Carter casually tosses off a series of numbers.  Bannion provides the correct answer Carter is looking for without missing a beat as they stroll down the street.  Johnny, like most of the men in prison, doesn’t stand a chance in a class and economic system that is changing, and not in their favor.

Johnny doesn’t see nor understand the changes that will make figures like him obsolete.  The Criminal is a deeply political movie disguised as a genre film.  The creators of this film were left-wing, Losey banished to Europe by the Communist Blacklist of the 1950s, and the modern world to them, including the underworld, is a cold, corporate capitalistic world where money is the bottom line – everything is transactional.  Johnny is ruled by his emotions and this leads to his downfall.

Patrick Magee is wonderful as the oily head guard, Mr. Barrows.  Barrows knows what is going on at all times and conveniently turns his head the other way, sometimes even doing the dirty work of Saffron as when he has Bannion placed in a cell with two thugs instructed to work over Bannion.

There is a wonderful shot of Magee when during a riot he is locked in a cell with other guards.  The door opens as the inmates toss another guard into the cell and you see a non-plussed Barrows calmly smoking a cigarette.  He knows this chaos is temporary and when it’s over he will continue to be in charge.  As one watches the interactions between guards and prisoners, one gets the sense that the guards could just as easily be on the other side.

The only person who seems unaware of the conditions within the prison is the clueless warden played by Noel Willman.  As is often the case of those on top he doesn’t seem to interact with prisoners other than when they are admitted and again upon release.  All of his impressions are filtered by those below who play the system for their own benefit.

Things are no better outside of prison as there is no loyalty among thieves.  Johnny is betrayed multiple times by old gang mates.  Johnny is loyal to those around him, particularly weaker cellmates, but is no better in his treatment of the discarded Maggie.  No excuse is given but it seems as if Johnny tosses her over because it’s time for an upgrade, like a new stereo system to listen to his cool jazz collection.

Suzanne’s scheming behind her roommate’s back is odious.  Johnny and Suzanne aren’t doomed lovers like the couple in They Live by Night; in fact, if Suzanne had listened to Johnny and left his comfortable apartment as he told her to, Johnny would not have fallen into Saffron’s trap.  While Johnny is not glamorized, he is nonetheless tragic.

The Criminal is a strange transfer; it’s advertised as a new 4K restoration.  It is very clean, maybe too scrubbed.  I’m not good at spotting DNR but there is little grain, but textures are visible in the image.  It also looks like it’s possibly timed a bit too light and would benefit from being a little darker.  I’m guessing that this is what Studio Canal delivered to Kino.  I’m giving it a 4 rating, but I would rate it slightly lower.  But the photography by Carol Reed favorite Robert Krasker (Henry V, The Third Man, The Rising of the Moon, El Cid) is very good.  The opening credits unfold over a single shot in a confined space where prisoners are being processed for incarceration or release.  The camera moves effortlessly in a cramped space constantly shifting focus.  It is an impressive shot that doesn’t draw attention to itself.  The look of the movie is almost documentarian with the exception of a couple of scenes, one theatrical moment involves revealing the mental illness of an inmate as the action almost stops and all light other than on the actor disappears – as if a troubled psyche is illuminated exclusively for the audience.  The Production Design by Richard MacDonald (who collaborated with Losey throughout his career) and Art Direction by Scott MacGregor is first-rate for a low budget movie.  The prison sets are very effective.

The audio is ok.  I had to listen closely as actors often employ thick regional accents.  My biggest problem was with leading lady Margit Saad.  She has a German accent coupled with a whispery voice – I had to check out the subtitles in a couple of her key scenes.  Johnny Dankworth delivers a good if unexpected Jazz score with his wife Cleo Laine providing the haunting vocals used as a refrain throughout the picture.

Audio commentary by Kat Ellinger.  The commentary is typical of Ellinger.  It’s casual, almost conversational.  Perhaps a bit too much speculation and not enough researched material for my taste, but her insights into English class are worthwhile.

Trailers of Losey and Baker movies released by Kino

The Criminal comes when Joseph Losey in that period before The Servant is straddling genre filmmaking (These Are the Damned) and art-house fare (Eva).  By 1960 there isn’t a lot of this product being produced in the US (maybe television filled that need?).  It’s easy to take a movie like The Criminal for granted because it doesn’t hit the highs of the genre, but it hits the spot.  It is tough and unsentimental; it honestly depicts a time and place of change as seen from the bottom.  Its themes of institutional corruption would have been unthinkable in a British film just a few years earlier.  The Criminal is a triumph of low budget filmmaking with a lot of first-rate talent behind and in front (a remarkable cast of British character actors of the era) camera. 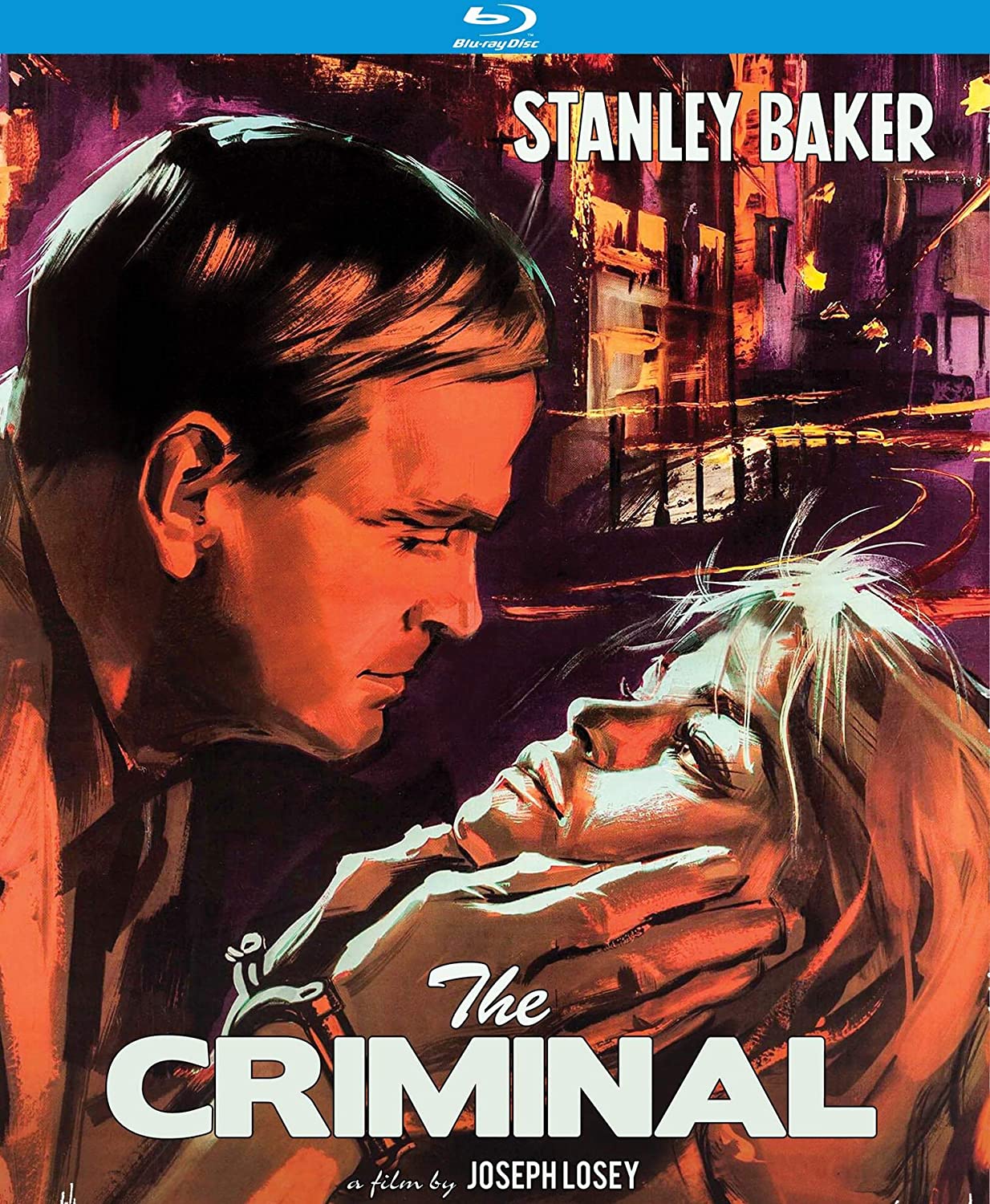