Forum List What's new Dark Style Change width
Log in Register
What's new Search
Menu
Log in
Register
Navigation
Install the app
More options
Dark Style
Close Menu
Posted on June 23, 2018 by Matt Hough
You are using an out of date browser. It may not display this or other websites correctly.
You should upgrade or use an alternative browser.
Entertaining two-reel comedies with a female odd couple. 3.5 Stars

Throughout the 1920s and 1930s, the name Hal Roach was synonymous with rollicking screen comedy. During those decades particularly, he built up a reputation as a comedy baron producing a series of hit short films and features starring single comics (Harold Lloyd, Charley Chase, Harry Langdon), screen duos (the most famous being Laurel and Hardy), and the ubiquitous Our Gang earning two Academy Awards along the way and introducing the world to a host of funny men and women. When his very successful female screen duo of glamorous Thelma Todd and zany ZaSu Pitts broke up after three profitable years due to Ms. Pitts’ salary demands, he replaced her with raucous vaudevillian Patsy Kelly renowned for her dancing and a way with a wisecrack. The team of Todd and Kelly become just as successful as the earlier team and the duo churned out twenty-one two-reel comedies featuring the unlikely duo, the partnership only ending with the tragic death of Thelma Todd in 1935. Classic Flix has resurrected all twenty-one of these comedy shorts and have packaged them in a three-DVD set titled The Complete Hal Roach/Thelma Todd/Patsy Kelly Comedy Collection.

Filmed during three years of the Great Depression, the majority of these short films find the gal pals struggling to make ends meet in order to pay rent, buy food and clothes, and get along in an often hostile world. Occasionally they have jobs like hairdressers, air hostesses, short order cooks, small-time entertainers looking for a break, struggling reporters, door-to-door saleswomen, or maids, but even in the shorts where their occupations aren’t important (Sing Sister Sing, The Tin Man, Hot Money), the comedy is almost always of the same variety with the headstrong Patsy blundering into situations that make it tough for Thelma and her to emerge unscathed. With Hal Roach’s expertise and the direction of veteran Gus Meius and others, slapstick is the order of the day, sometimes on a grand scale as with a massive traffic pile-up on the Roach studio’s city street backlot location (Beauty and the Bus) or a sandstorm which completely engulfs the farm Patsy has impulsively bought with the girls’ hard-earned nest egg (One-Horse Farmers).

Hal Roach was also smart to surround his comic duo with featured players who were like a Roach comedy stock company. If you’ve ever seen any of the Our Gang or Laurel and Hardy shorts, you’ll be sure to recognize faces who regularly appeared there and in these Todd/Kelly shorts: the effete Don Barclay, the perpetually intoxicated Arthur Housman, the jittery Johnny Arthur, the cranky Clarence Wilson, the authoritative Dell Henderson along with Our Gang moppet Tommy “Butch” Bond and the grown up Mickey Daniels and Billy Gilbert, Eddie Foy, Jr., Benny Baker, Billy Bletcher, Charlie Hall, and Jack Barty. The shorts also share the very familiar and unmistakable set of themes by composer Leroy Shield that also ran through the Laurel and Hardy and Our Gang shorts as musical accompaniment. And speaking of music, in Slightly Static, you’ll see the unimaginably young Roy Rogers singing lead vocals with the Sons of the Pioneers, the entire short devoted to Thelma and Patsy trying to break into radio and which allowed Patsy her best (but not only) opportunity to show off her considerable tapping skill.

Here are the shorts which are available on this three-disc DVD set. While they’re not all comedy gems, most are certainly a sure cure for what ails you though their similarity in tone makes watching more than two or three at a time a less satisfying experience:

(1934) Babes in the Goods, Soup and Fish, Maid in Hollywood, I’ll Be Suing You, Three Chumps Ahead, One-Horse Farmers, Opened by Mistake, Done in Oil, Bum Voyage

The shorts are presented in their original 1.37:1 theatrical aspect ratio. For material of this age, the clarity is quite remarkable, and while there are some scratches and dust specks along the way, most of the entries look surprisingly strong for standard definition presentation with a sturdy grayscale with black and white levels of surprisingly clarity. One-Horse Farmers appears softer and in rougher shape than the majority of the other entries. These two-reel comedies are only a single chapter and run anywhere from 15 to 20 minutes.

The Dolby Digital 2.0 sound mix is decoded by Dolby Prologic into the center channel. While most of the shorts feature a cleaned-up soundtrack with few if any aural artifacts, there are a few shorts where hiss, crackle, and pops are quite prominent. But these are not the norm, and most of the audio mixes feature the dialogue, background accompaniment, and sound effects in nicely balanced presentations.

Pan Handlers (20:18): With the death of Thelma Todd, Hal Roach attempted to keep the shorts going by teaming Patsy Kelly with Pert Kelton, but their one-time pairing here didn’t demonstrate much on-screen chemistry.

At Sea Shore (19:31) and Hill-Tillies (17:55): Next Roach paired Kelly up with glamorous immigrant Lyda Roberti for two shorts. Their chemistry was better, but Roach saw that two-reelers were a dying art and began phasing them out of his production cycle.

The Complete Hal Roach/Thelma Todd/Patsy Kelly Comedy Collection fills a worthwhile space on the shelf of comedy lovers everywhere. The two performers were talented and well-matched, and the shorts remind us of a simpler, more carefree time when twenty minutes of raucous foolishness served as a feel good pill for the entire day.

Can't say it any better than that. +1

Marvin Hatley did indeed compose Laurel and Hardy's “Ku-Ku” song and scored many Roach films, but the vast majority of the tunes burned into our consciousness from watching L and H, Our Gang and the rest were composed by Leroy Shield. These were notably recorded in original arrangements by the Dutch group The Beau Hunks on two CD sets in the 1990s.
P

Paul Penna said:
Marvin Hatley did indeed compose Laurel and Hardy's “Ku-Ku” song and scored many Roach films, but the vast majority of the tunes burned into our consciousness from watching L and H, Our Gang and the rest were composed by Leroy Shield. These were notably recorded in original arrangements by the Dutch group The Beau Hunks on two CD sets in the 1990s.
Click to expand...

This is a great alert from Paul Penna. This 2 CD set is absolutely a "Must Own" for those who loved these compositions by Leroy Shield. Anyone who hasn't heard these recordings will find themselves amazed, charmed and smiling. A real treasure.
Last edited: Jun 25, 2018

Paul Penna said:
Marvin Hatley did indeed compose Laurel and Hardy's “Ku-Ku” song and scored many Roach films, but the vast majority of the tunes burned into our consciousness from watching L and H, Our Gang and the rest were composed by Leroy Shield. These were notably recorded in original arrangements by the Dutch group The Beau Hunks on two CD sets in the 1990s.
Click to expand...

Thanks for the correction. I'll amend the review.

It's great that so much Thelma Todd material is finally being officially released in such fine condition. Not only ClassicFlix's complete set of Todd/Kelly shorts, but also the first volume of Charley Chase two-reelers from Sprocket Vault, as well as their complete collection of Todd/Pitts shorts due out in October. Then there's James Neibaur's book on the films of Todd/Pitts/Kelly (McFarland Publishers) that's coming out in December.
Last edited: Aug 8, 2018

Any word on Charley Chase The Talkies of Hal Roach Volume 2 coming out?

Nope - not yet. All depends on how well volume 1 sells.
You must log in or register to reply here. 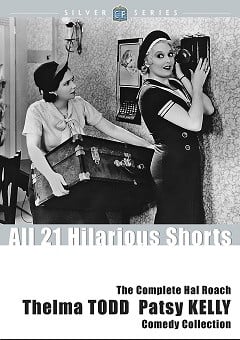