Arthur Penn’s The Chase is a fascinating combination of small town soap opera and a story about an escaped convict on the lam. Produced by Sam Spiegel and featuring an outstanding cast, it was lambasted by some critics when it was released (Bosley Crowther of the New York Times sniffed, “This is a picture to leave you cold.”). Looking back at it 50 years after its theatrical release, it comes across as something of a southern-fried version of Peyton Place, with the actual chase mostly playing second fiddle to the tawdry goings-on about town.

Shoot a man for sleeping with someone’s wife? That’s silly. Half the town would be wiped out. – Emily Stewart

Arthur Penn’s The Chase is a fascinating combination of small town soap opera and a story about an escaped convict on the lam. Produced by Sam Spiegel and featuring an outstanding cast, it was lambasted by some critics when it was released (Bosley Crowther of the New York Times sniffed, “This is a picture to leave you cold.”). Looking back at it 50 years after its theatrical release, it comes across as something of a southern-fried version of Peyton Place, with the actual chase mostly playing second fiddle to the tawdry goings-on about town.

“Bubber” Reeves (Robert Redford) is a young ne’er do well who, along with another convict, has just escaped from a Texas prison. Making their way to a lonely country road, they waylay a passing motorist who is clubbed to death by Bubber’s fellow escapee. While Bubber takes a moment to help himself to the dead man’s clothes, the other convict races away in the man’s car, leaving Bubber to fend for himself, as well as finding himself accused of the murder.

Word about the escape gets back to Bubber’s home town, where some of the residents have reason to be concerned. The town is essentially run by the local oil baron and banker, Val Rogers (E.G. Marshall). His son, Jake Rogers (James Fox), is in an unhappy marriage with his wife Elizabeth (Diana Hyland) and has been carrying on a not-so-secret affair with Bubber’s wife, Anna (Jane Fonda). Jake fears that Bubber, his one-time close friend, will turn violent if he returns to the town and learns about what Jake and Anna have been up during his incarceration.

Edwin Stewart (Robert Duvall), a vice-president at the bank, is worried that Bubber might seek revenge because he once took the rap for a misguided deed that Edwin committed during his youth. In the meantime, Edwin’s party-loving wife Emily (Janice Rule) has been engaged in a dalliance with Damon Fuller (Richard Bradford), who also works at the bank. Fuller has no particular grievance with Bubber, but he and his redneck friends would be happy to participate in a manhunt.

Bubber makes his way to a railroad yard, where he hops a freight train which he believes is headed to Mexico. Aboard the train he meets some migrant workers who give him the bad news that the train is actually head north and is near his home town. Bubber jumps from the train into a lake, where he swims to shore and discovers that he is next to property owned by Val Rogers.

It is Saturday night, and two parties are going on. An upper-class party is celebrating the birthday of Val Rogers at his estate. The one guest who feels out of place is Sheriff Calder (Marlon Brando), who is there with his wife, Ruby (Angie Dickinson). Calder is a man of modest ambition, but the townspeople believe that he is Rogers’ puppet. Jake Rogers is chomping at the bit to get away because he has plans to hook up with Anna, but he is being pressured by his father to remain and give a speech. Calder grows weary of the party and takes Ruby home. He then learns that Bubber has been implicated in a murder, so he gets into uniform and goes out on patrol.

The other party is decidedly more middle class. Edwin Stewart is there with his wife, but he is terrified of Bubber and hunkers down next to a radio to follow the news reports of the manhunt. The carefree Emily flirts openly with Fuller, whose wife Mary (Martha Hyer) is inebriated. The party is loud and the booze if flowing, and what would a Texas party be without someone with a gun firing shots in the air? All of this unseemly behavior is noted by the passing Mr. Briggs (Henry Hull), the local busybody who sticks his disapproving nose in everyone’s business. A young black man walks by and is accosted by Fuller and his pals, who threaten to kill the man until Sheriff Calder drives up and intervenes. The tension begins to build when word spreads that Bubber is in the vicinity. The plot begins to resemble High Noon when Sheriff Calder makes it clear that he wants to peacefully return Bubber to prison, while the armed and alcohol-fueled townspeople want to form a vigilante posse.

Director Penn, who a year later would achieve fame with Bonnie and Clyde, was shut out of most of the editing (which was overseen by Sam Spiegel), and he was not happy with the film as it was released. It is based upon a novel and play by Horton Foote, and the screenplay was written by Lillian Hellman. It is a shame that there is no director’s cut, because it would be interesting to see how it would have turned out if Penn had been in charge. The story suggests that Bubber was raised badly by his parents (played by Malcolm Atterbury and Miriam Hopkins), but no details are given. The drunken Mary Fuller appears with no introduction whatsoever, which creates puzzlement about who she is, and she is onscreen for nearly two minutes before it becomes clear that she is Damon’s wife. While the story is not as cohesive and it might have been with better editing, it remains a fascinating and memorable film.

Marlon Brando gives an excellent, restrained portrayal of the lawman who chafes at the notion that he is the lackey of Val Rogers, and Angie Dickinson is fine as his wife. Robert Redford had previously done mostly television work and was still a few years away from superstardom, but he is effective and believable as Bubber. Jane Fonda makes only a brief appearance during the first half of the film but her performance does much to elevate the second half. Janice Rule is superb and sexy as Emily, the woman who doesn’t care that everyone knows that she is carrying on with Damon Fuller. The one weak link in the cast is James Fox, the British actor who is barely believable as the son of a southern aristocrat.

The Chase could have been a better film, but its troubled production cannot hide the fact that there is a great deal of talent on display here.

The 1080p transfer is a typically excellent one from Sony. The image is properly framed at 2.35:1 and is flawless. The cinematography by Joseph LaShelle is outstanding, with a vivid climactic scene in a junkyard. The image is sharp throughout, with accurate colors and fine shadow detail. There is no hint of age-related damage or other anomalies.

Readers are encouraged to consider the high praise bestowed on this Blu-ray by our resident film restoration expert, Robert A. Harris:

A few words about…™ The Chase — in Blu-ray

The English 1.0 DTS-HD MA audio is a good as it could be. Every word of dialogue is clear and understandable, and English SDH subtitles are an option for those who need them. Even with only one channel, the film provides a lot audio punch in the action scenes.

The excellent score by John Barry is presented with excellent fidelity.

The extras on this Twilight Time Blu-ray include, of course, an isolated score track.

Also included are the original theatrical trailer, which is in good shape, and an extremely interesting commentary track by film historians Lem Dobbs, Nick Redman, and Jule Kirgo. Julie also contributes a thoughtful and informative essay in the enclosed eight-page illustrated booklet.

The Chase is a flawed but ultimately fascinating film which is memorable and thought-provoking. It also is as timely today as it was in 1966, touching on such issues as racism, mob violence, the prevalence of guns in our culture, and the relationship of money to power.

Those who are interested in purchasing it should be aware that it has been released in a limited edition of 3,000 copies. It can be found at the Twilight Time website or the Screen Archives website.

A good review. Thank you. I have often described The Chase as "High Noon in Peyton Place" so we obviously notice the same things in this film.
Reactions: benbess

Robin9 said:
A good review. Thank you. I have often described The Chase as "High Noon in Peyton Place" so we obviously notice the same things in this film.
Click to expand...

Great minds think alike! Which begs the question - when is Fox going to release Peyton Place on Blu-ray? Perhaps Twilight Time has plans for it.
Reactions: Robin9 and John Hermes
You must log in or register to reply here.

Cohen Media Group Press Release: That Man From Rio and Up To His Ears 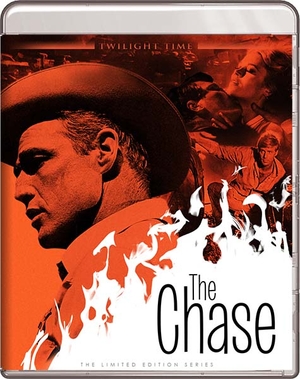