Forum List What's new Dark Style Change width
Log in Register
What's new Search
Menu
Log in
Register
Navigation
Install the app
More options
Dark Style
Close Menu
Posted on September 22, 2019 by t1g3r5fan
You are using an out of date browser. It may not display this or other websites correctly.
You should upgrade or use an alternative browser.
Hitchcockian thriller debuts on Blu-ray 3.5 Stars

The French New Wave gave world cinema some of its finest directors – among them Francois Truffaut, Jean-Luc Godard, Alain Resnais, Jacques Rivette, Jacques Demy, and Agnes Varda. Included amongst that bunch of master filmmakers was Claude Chabrol – a former Cahiers du Cinema critic like some of his contemporaries – who idolized the “Master of Suspense”, Alfred Hitchcock, more than any other director; The Champagne Murders (AKA Le scandale) gave him a chance to pay tribute to his cinematic idol. Long unavailable on home video, Kino Lorber has picked up the film for its debut on Blu-ray.

Paul Wagner (Maurice Ronet) is the scion of his family’s champagne business, recovering from a traumatic head injury which has left him unable to run the day-to-day business of the company. Despite a lucrative offer from an American buyer for the business, he turns it down, but that’s the least of his worries. A series of mysterious deaths, all of which occurring when Paul is very drunk and present around a woman, leads him to think that he might be responsible for them. However, the crimes themselves pale in comparison to not only who’s responsible, but the motive behind the murders…

A puzzle like thriller through and through, The Champagne Murders is a devious little suspenser that never truly tips its hand. Director Claude Chabrol clearly has a knack for generation tension and suspense, leaving us to wonder whether Paul truly is a killer or a pawn that someone else is using for their benefit; the same could be said for the rest of the cast of characters, leaving their motives vague as to their intentions. Amazingly, upon first release, critics were mostly dismissive of the film as either a cheap knock off of Hitchcock or as just too puzzling to follow; it’s not too surprising, as – like the best of the Master of Suspense’s movies – this movie has a great visual sense that does give the viewer some hints into what the intentions or the twists may come about, but you have to be paying attention! Anyway, The Champagne Murders is a slick and twist filled thriller that does require several viewings to uncover some of the labyrinth styled secrets that lead up to a real cliffhanger of an ending (one which could rival The Italian Job for best open ended ending of the 1960s).

Clearly top billed to capitalize on his success with Psycho (1960), Anthony Perkins has one of his best roles following the Hitchcock classic as Paul’s friend and former gigolo. Maurice Ronet certainly fits the “ordinary man in an extraordinary circumstance” role as Paul, who may or may not be a killer; he ended up with a Best Actor award at the San Sebastian International Film Festival for his performance. Stephane Audran (who was married to Chabrol at the time of filming) is notable as the company secretary with a secret; Yvonne Furneaux has a solid bit as the de facto head of the champagne company trying to get Paul to sell his share of the family business. Other notable appearances include Henry Jones as the prospective American buyer, Christa Lang as a German prostitute and one of the victims, Suzanne Lloyd as a promiscuous English artist, and Annie Vidal as the mysterious blonde who keeps turning up wherever Paul is.

The English language version of the movie is presented in its original 2:35:1 aspect ratio for this HD transfer. There’s a healthy sheen of film grain that’s organic and fine details as well as the color palette have been rendered faithfully as well. Instance of problems related with age – dirt, dust, scratches, tears, etc. – are very few and far in between, making this a great home video debut for the movie.

The film’s original mono soundtrack is presented on a DTS-HD Master Audio track for this release. Dialogue, sound effects, and music are strong and clear throughout with next to no instances of issues like crackling, popping, hissing, or dropouts in quality present. Again, another high mark for the film in its home video debut.

Commentary by film historians Howard S. Berger & Nathaniel Thompson – Recorded for this release, the duo talk about the movie as well as some of the differences between the English and French language versions that were filmed simultaneously; overall, a very insightful and entertaining track.

Trailers from Hell with Tim Hunter (3:01)

While it came and went without much notice, The Champagne Murders is still an intriguing thriller filled with many twists and turns. Kino should be commended for reviving this little gem of a movie on home video, with great marks for both audio and visual quality as well as an informative commentary track. Recommended. 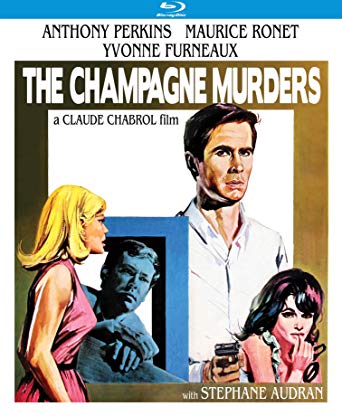