Forum List What's new Dark Style Change width
Log in Register
What's new Search
Menu
Log in
Register
Navigation
Install the app
More options
Dark Style
Close Menu
Posted on November 3, 2019 by t1g3r5fan
You are using an out of date browser. It may not display this or other websites correctly.
You should upgrade or use an alternative browser.
Cold War spy thriller debuts on Blu-ray 4 Stars

The Cold War was a time of uncertainty for America – as it waged an ideological war with the Soviet Union – but it proved to be fertile material for Hollywood to make movies from. While the majority of the movies made focused on the clash between Americans and Russians, one movie – The Chairman – got a chance to look at the relations between the US and China through the lens of an espionage story. Previously released by Fox on DVD, Twilight Time has licensed the film for its Blu-ray debut.

Nobel Prize winning professor and chemist John Hathaway (Gregory Peck) receives a letter from a former colleague who went to China ten years ago and didn’t return. He’s also recruited to fly to China to meet with him in order to procure the formula for an agricultural enzyme that could change the world. However, he’s also sent in with a transmitter implanted in his head that also doubles as an explosive device; if things get too dangerous, Dr. Hathaway will literally blow his head off!

Made during a time when the spy genre was in full swing due to the rise of James Bond, The Chairman is a notable example of the genre outside of the Bond franchise. For instance, the movie uses the tensions between the US and China (something that wasn’t really explored a whole lot in movies) as a template for the main story; a couple of plot devices utilized here pay homage to past filmmakers – the agricultural enzyme as the MacGuffin here is a tip of the cap to Alfred Hitchcock – while laying a path for future filmmakers to pick up on (one could argue that John Carpenter may have been inspired by the idea of having the hero implanted with an explosive device when he made Escape from New York). The film is modestly paced to start, but picks up steam once Hathaway enters China and keeps the tension at a fever pitch right up to its tense climax on the Mongolian border. This is a testament to the ability of director J. Lee Thompson holding our interest throughout the film; it’s not really surprising, given that he had previous success earlier in the decade with Cape Fear (1962), another collaboration between the director and its lead star here. There’s really not much to complain about here, meaning that The Chairman is a neat and tense little gem that’s ripe for rediscovery.

Gregory Peck gives a solid performance as the professor roped in as a reluctant spy for the US; it’s one of his most overlooked roles in his career. Despite being second billed as the female lead, Anne Heywood basically has an extended bit part as Hathaway’s love interest and fellow professor in London. Arthur Hill casts a memorable impression as the gung ho lieutenant general who brings Hathaway into the espionage game; Alan Dobie is fine as the British attaché assigned to Lt. General Shelby. Other notable appearances here include Zienia Merton as the woman who tries to seduce Hathaway in Hong Kong, Ori Levy as the Russian agent assigned to Shelby and Benson in London, Eric Young as the main antagonist – a suspicious Chinese Army general, Burt Kwouk (Cato himself) as Hathaway’s contact when things get a little too hot, Keye Luke as the colleague of Hathaway’s, Mai Ling as a stewardess in the opening of the movie (basically a reprise of a similar role she had in 1964’s Goldfinger), and Conrad Yama as Chairman Mao.

The film’s original 2:35:1 aspect ratio is intact on this HD transfer. Film grain is strong and organic throughout, with colors strong and fine details given a faithful rendering. There’s minimal instances of problems like dirt, dust and scratches present; there a slight instance of a jittery frame for a few seconds prior to the film’s end credits, but this is not too distracting. Overall, this transfer is an improvement over the previous Fox DVD and likely the best the movie will ever look on home video.

There are two options here: a 1.0 mono DTS-HD Master Audio track and a 2.0 stereo DTS-HD Master Audio track. Both tracks have the dialogue and sound mix rendered strongly, with Jerry Goldsmith’s score given solid ambiance and fidelity as well. There’s nary an instance of age related problems, like distortion, crackling, popping, or dropout in volume present, which means that this is the best the movie will likely ever sound on home video and that both tracks are an improvement over the previous Fox DVD.

Commentary by film historians Eddy Friedfeld & Lee Pfeiffer – Carried over from the 2006 Fox Cinema Classics DVD release, the duo talk about the movie as well as some of the cultural context of the Cold War from the China-US perspective, which was rarely covered in film up until this movie’s release.

The Chairman mini-film (17:35) – Newly restored for this release, the condensed version of the movie featuring deleted scenes and alternate footage not present in the final release of the movie.

While it didn’t garner much attention upon first release, The Chairman is still a thrilling and entertaining movie that explored a territory of Cold War cinema not usually touched upon. Twilight Time has done another great job in bringing the movie to Blu-ray with great marks for both picture and audio quality. Recommended, but there’s a limited amount of copies available (3,000 to be exact), so get yours while you can! 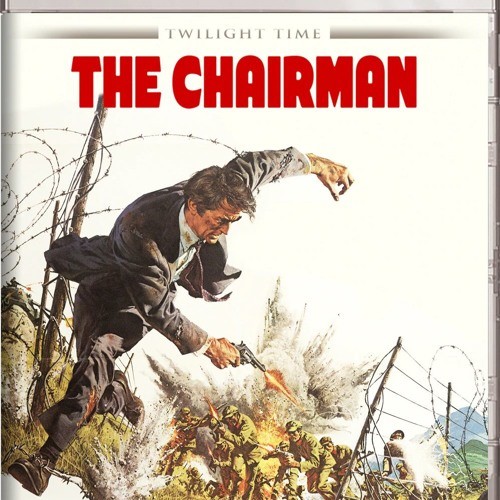