Forum List What's new Dark Style Change width
Log in Register
What's new Search
Menu
Log in
Register
Navigation
Install the app
More options
Dark Style
Close Menu
Posted on August 4, 2018 by Timothy Bodzioney
You are using an out of date browser. It may not display this or other websites correctly.
You should upgrade or use an alternative browser.
Highly recommended 4.5 Stars

Dario Argento’s second film comes at the peak of the Giallo cycle and has many of the ingredients (grisly murders, late 1960s/early 1970s fashions and design styles including outlandish apartments and even a visit to an Italian gay bar, all topped off with a Morricone score) that make the genre so entertaining.

The Cat O’ Nine Tails opens one evening with a blind man, Franco Arno (Karl Malden) and his young niece, Lori walking down a city street on their way home.  Passing a parked car Arno believes he hears a man plotting a crime.  Though fragmentary it sounds like blackmail.  Later that night, across the street from the Arno apartment, there is break-in at the Terzi Institute, a genetics research laboratory. Initially, it is determined to be a case of corporate espionage – or is it?

The next day a man is killed by a train entering a station, this is reported in the newspaper as an accident.  As Lori reads the afternoon newspaper to her uncle she realizes that the man who died at the train station is the same man who was sitting in the parked car the previous evening and was a researcher at the Terzi Institute.  Coincidence – or is it?  Arno soon joins forces with newspaper reporter, Carlo Giordani (James Franciscus) to solve the mystery.

This sets up a series of murders that firmly take place in Giallo-land.  The Giallo is not an easily defined genre in that it has lots of variations, some examples are so incredibly sleazy, such as Fernando Di Leo’s Slaughter Hotel, that one should shower after watching.  Its literary roots are in pulp fiction (lurid crime paperbacks with yellow covers), with particular credit given to British authors Edgar Wallace and his son, Bryan (an uncredited source of Cat); its theatrical and film roots are in Old Dark House plays and movies; these are more or less Whodunnits.  A group of people are usually confined to a space and one by one are murdered until the protagonist, almost by process of literal elimination, unveils the culprit.  Even Laurel and Hardy did one of these, 1930’s three-reeler The Laurel and Hardy Murder Case.  The Giallo’s German cousin the Krimi kicks off in the late 1950s with a series of playfully stylish, almost surrealistic films based on stories by the Wallaces.  The first Giallo is generally considered to be Bava’s 1963 film, The Girl Who Knew Too Much.

There are a couple of differences between the Giallo and what preceded it in that the murders in earlier movies were usually committed off screen and only described, whereas the murders in Giallos are violently and in many instances sadistically depicted in set pieces, often from the point of view of the killer, that are akin to musical numbers in musicals.  As I wrote above, the Krimi is so playful and artificial that it is impossible to take them as anything other than cinematic candy.  The Giallo is often grim and humorless, though fans claim the sheer excessiveness is intended as comedy.  The Giallo is usually rooted in psychological motives that have as much depth as a Scooby Doo mystery.   Style always takes precedence over content.  So much so that often the stories are incoherent.

1971’s The Cat O’ Nine Tails is Dario Argento’s second feature, was rushed into production after the unexpected American success of his debut feature, The Bird with the Crystal Plumage.  Film historians Alan Jones (author of Dario Argento: the Man, the Myths, the Magic) and Kim Newman state in the their commentary that of all of his movies, Argento is least fond of Cat and that he considers it too ‘Hollywood.’  This is interesting because it’s two leads are American actors and it is a bit tamer both stylistically and in terms of violence than other Argento movies, and certainly most Giallos of the era.

Argento is a cold director – that isn’t a criticism.  His characters are not real people, but pieces of a puzzle, and interestingly Malden’s character, an ex-newspaper reporter retired due to accidental blindness, is obsessed with solving puzzles.  There generally isn’t much sex in Aregento movies, but Cat has one of the least erotic love scenes I’ve ever seen in a movie.  The most recognizably human thing in the movie is the warm relationship between Arno and his niece, Lori who calls her uncle Cookie, because as she says, he is sweet.  I’m sure this warmth is due to Malden and the chemistry he had with the actress who plays the girl, Cinzia De Carolis.

Ennio Morricone’s score is somewhat subdued but immediately recognizable.  Did Morricone score every Italian movie of the era?

The Cat O’ Nine Tails falls into Argento’s series of straight Giallo, with other films such as the above-mentioned Crystal Plumage, Four Flies on Grey Velvet, Deep Red, and Tenebre.   In films such as Suspiria, Inferno, and Phenomena, the stories achieve an other-worldly, dreamlike quality that make the films more mysterious and somehow more satisfying, though not necessarily more coherent.  Though I’m sure not all Argento fans would agree with that assessment.

In America along with Sergio Leone and Mario Bava, Argento is perhaps one of the best-known Italian genre directors.  Whereas the unprolific Leone, was quickly recognized as an artist and Bava, whose relatively brief but prolific directing career is filled with an artistic restlessness that incorporates a great deal of experimentation and genre crossing, Argento reminds me a bit of American John Carpenter in that both have had long and sustained careers working unembarrassedly in critically disrespected genres.  Both Argento and Carpenter hit the ground artistically fully formed (if one discounts Carpenter’s Dark Star, which is an expanded student film), unlike director David Cronenberg whose artistic development is obvious in his early films.  While some fans and critics complain of artistic decline, both Argento and Carpenter remained true to their roots while cinematic tastes changed.  Though it appears Carpenter is retired from directing, Argento in his late seventies, keeps plugging away, and I’m thankful for that.

Arrow’s 2.35:1 transfer is a 4K scan off of the original camera negative.  It looks very nice. Fifty years is a long time, but color wise it looks like what I remember movies of the era looking like.  Much of the film takes place at night and these scenes are somewhat muted, but daylight exteriors contain colors that are bright and bold.  Blacks are deep and with the exception of a couple of scenes, the contrast is good.  It was originally filmed in Technicsope, so there is obvious grain.  The image has been cleaned up and stabilized, so in that sense I’m sure that this transfer looks better than a print from 1971.

There are two audio options, Italian and English, both are mono.  The film was shot in with actors speaking English and both Malden and Franciscus dubbed their own voices.  The Italian soundtrack features other actors dubbing the Americans.   Both tracks were clean sounding.

There is a commentary featuring British critics/scholars Alan Jones and Kim Newman.  The two appear to be old friends and the commentary is conversational with lots of information about the production and the genre.  The commentary is very engaging and slows down a bit during the second half, almost like an after-movie discussion in a diner where the participants start off excited about what they have just seen and tire out as the night drags on.  Two hours is long time to discuss a movie.

The disc has newly translated subtitles.

There are plenty of supplements:

The above-mentioned commentary that covers a great deal of the production including Argento’s troubled relationship with his co-writer, Dardano Sacchetti and his working relationship with the actors.  The pair also spend a good deal of time discussing Catherine Spaak’s wardrobe and wig.

A new interview with Argento confirms his disappointment with the film.  He speaks very fondly of Malden and says nothing bad about Franciscus other than that he was professional but remote during filming.  He unfavorably compares Cat cinematographer Erico Menczer to Bird DP Vittorio Storaro, which is unfair to Menczer; not many would compare favorably to Storaro.

There is a 35-minute rambling, but fun interview with writer Sacchetti.  Sacchetti talks about his tempestuous relationship with Argento and the inspiration and writing of the script.  His anecdotes about Italian film industry chicanery are amusing.

A description of the original ending.

Italian and international trailers are included.

Watching a movie like The Cat O’Nine Tails is like stepping into a time machine.  I remember seeing a trailer for it at a neighborhood theater at the time, but this ten-year-old critic dismissed it because it didn’t have Christopher Lee, Peter Cushing, or Vincent Price in it.  The movie is loaded with lots of Turin location work, 1970s fashions, set design, and hair styles.  Like many productions of the era, I’m sure there are elements that could not be done today and the whole genetic angle, which sounds more like something one would find in a 19th century melodrama as opposed to a 1970s movie is just silly.  The performances from the American leads and familiar European character actors are good, with Spaak suffering the most due to the script.  While maybe ten to fifteen minutes too long, Argento moves it along so assuredly that one doesn’t ask too many questions while watching.  Arrow delivers an excellent disc of a good, if critically neglected Giallo by one of the form’s foremost practitioners. 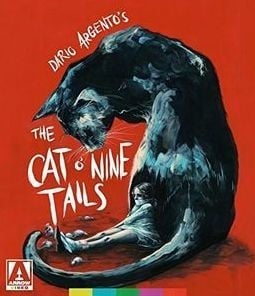