The films in The Buster Keaton Collection Volume 3 (Seven Chances, Battling Butler) may not constitute his movie masterpieces, but no one can deny their inventiveness and entertainment value.

There is always a good time to be had at a Buster Keaton silent movie. Even when dealing with films that aren’t considered among his masterpieces, Buster’s agility and his inventiveness with gags can always deliver the laughs. In The Buster Keaton Collection Volume 3, there are two of his big silent hits Seven Chances and Battling Butler, neither great films in the tradition of his The General, Sherlock, Jr., Steamboat Bill, Jr., or The Navigator but both imminently worthy of watching and appreciating. The new Cohen Media Group Blu-ray presentation offers good to great picture quality that better lets us appreciate the master at work.

Struggling stockbroker Jimmie Shannon (Buster Keaton) learns that if he gets married by 7 p.m. on his 27th birthday — which is today — he’ll inherit $7 million from an eccentric relative. But, after Mary Jones (Ruth Dwyer), whom he’s mooned over for years, turns him down after an awkward and inconsiderate proposal, he has only a few hours left to find a woman who’ll marry him. When his friends try to help by placing an ad in the afternoon newspaper, the shy Jimmie finds himself chased through the streets by hundreds of marriage-minded women who find the allure of a $7 million windfall too much to ignore.

Written by Clyde Bruckman, Joseph Mitchell, and Jean Havez (based on a play by Roi Cooper Megrue), the script takes a little bit of time to get started. A Technicolor prologue shows the lovebirds smitten with each other for an entire year without Jimmie ever popping the question, but the film proper finds the titled “seven chances” to be seven eligible girls Jimmie turns to after Mary haughtily turns him down. They’re dispensed with rather quickly, mainly because Jimmie never mentions to them the $7 million inheritance they’d come into upon marriage. The film’s real reason to be comes after the ad is posted and hundreds of veiled women storm after Jimmie lusting after that monetary windfall. The slapstick chase then gives the film’s second half its real kick: the women run roughshod through a football game leaving massive casualties, into and out of a streetcar, onto a construction site (where Buster hooked by a battering ram is something to see), through a cornfield, into an apiary, and navigating down a rocky hill where Buster’s incredible fleetness of foot and one of his most astonishing sight gags still brings gasps almost a hundred years later. In addition to directing that massive avalanche, Buster uses time lapse photography interestingly in the early going and has managed to find the slowest horse in Christendom when Mary tries to send word to her love that she’s changed her mind and will marry him.

Pampered millionaire Alfred Butler (Buster Keaton) goes on a camping excursion with his faithful servant (Snitz Edwards). Once in the wilderness, Alfred finds outdoor activities like hunting and fishing not to his liking and instead he tries to court a charming mountain girl (Sally O’Neil), who wants nothing to do with her spoiled suitor. Trying to impress the girl, Alfred masquerades as boxing star “Battling” Butler (Francis McDonald) since they have the same name. Unfortunately, when the real fighter finds out puny Alfred has been impersonating him, he promises to keep his secret from his new wife but actually decides a little lesson is in order which will lead Alfred into the prize ring.

The film, written by Paul G. Smith, Al Boasberg, Charles Smith, and Lex Neal and which runs an hour and eighteen minutes, is about thirty minutes too long. While there are some amusing sight gags during Alfred’s camping excursion (the spoiled man-child complains there is no game to stalk while huntable animals of every description flutter, dart, and scurry around him; a fishing excursion ends in a swamped canoe), the only real fall down funny moments involve Buster’s inept attempts to master the manly art of self-defense. His problems begin with trying to get into the ring where the agile funny man does several minutes of inspired slapstick with the ring ropes, and while most of the slugging and slapping are just okay, Keaton manages to use those springy ropes to climax several slapstick sequences. The several fights that occur during the movie are seconds long apart from a climactic one in the dressing room, so Chaplin’s masterful ring performance in City Lights still has no peer. Still, even second tier Buster Keaton is something to see.

The films are offered in 1080p resolution using the AVC codec. Seven Chances overall looks the better of the two films. The initial Technicolor sequence varies in color and screen density with some clouding on the left edge, but the remainder of the film is sharp and clear. Both films have been amber tinted, and Seven Chances has remarkably no age-related scratches or dirt to distract one’s attention. Battling Butler is also very sharp and detailed with excellent contrast, but there are some portions where deterioration spots appear in the center of the frame, and there is a scratch or two in evidence. Seven Chances has been divided into 6 chapters while Battling Butler has 8 chapters.

Both films offer Robert Isreal’s background score (often made up of popular tunes of the era) in DTS-HD Master Audio 2.0 stereo, and Battling Butler also offers a DTS-HD Master Audio 5.1 surround track which nicely expands the audio soundstage and gently envelops the listener.

Six-Page Booklet: contains some black and white stills, cast and crew lists for the two films, and a chapter listing for each.

The films in The Buster Keaton Collection Volume 3 (Seven Chances, Battling Butler) may not constitute his movie masterpieces, but no one can deny their inventiveness and entertainment value. The Cohen Media Group release brings us these silent classics in as good a condition as we’re ever likely to see. Recommended! 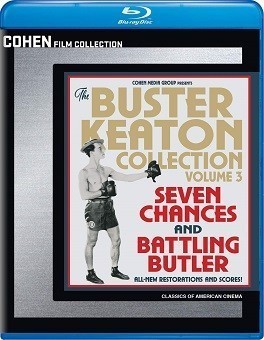