As part of a nostalgia kick that went on in the horror genre during the 1980’s, movies from the 1950’s or older were being remade or reworked – The Thing (1982) being one of the most prominent of this bunch – into new movies, evoking a sense of nostalgia for the simpler times of moviegoing. Part of this trend was Franc Roddam’s take on the classic Bride of Frankenstein, simply titled The Bride; however, it’s decision to take a new approach to the story wasn’t well received by critics and audiences at the time. Shout Factory, through their Scream Factory line, resurrects this unique take on Frankenstein with a very good Blu-ray release.

Working feverishly on a stormy night, Baron Charles Frankenstein (Sting) manages to create a mate for his initial creation (Clancy Brown). However, the monster, incensed by the rejection of his newly created mate, causes the destruction of Frankenstein’s laboratory, killing two of his assistants and sending the monster fleeing into the countryside – unbeknownst to the Baron. Over time, the creature forms a bond with a compassionate circus dwarf named Rinaldo (David Rappaport) – who names him Viktor – and travels with him while the Baron tries to mold his latest creation, Eva (Jennifer Beals), into the perfect equivalent to a man. However, it also becomes clear that there’s a psychic connection between the two – Viktor starts to learn about his self-worth from Rinaldo and Eva starts rebelling against the Baron when she learns the truth about her existence. It all leads up to a reunion that could spell the end of the Baron.

Reworking the classic Frankenstein story, The Bride is less of a horror movie and more of a psychological look at the characters, particularly the Baron’s creations trying to understand who they are and their place in the world. Supplementing the reworked story is a sumptuous atmosphere, with France doubling for Central Europe and shot in a rich color palette – by cinematographer Stephen H. Burum – that marked a significant departure from previous incarnations. However, despite high production values contributing to great look for a horror film, the script (by Lloyd Fonvielle) has a noticeable flaw: the psychic link between Viktor and Eva is never really explained, which may have contributed to the negative reaction of critics and audiences on initial release – the fact that they were expecting a full fledged horror movie probably didn’t help matters either. Also, the script makes an interesting idea that Eva’s yearning for independence as something of a metaphor for female empowerment that’s more akin to modern philosophy than 15th Century Central Europe; it was an idea that probably went over the heads of critics and audiences at the time but probably plays better today. So while some of Fonvielle’s ideas work and carry a degree of interest, some aren’t fully fleshed out or explored, keeping this from truly reaching the heights it aspires to go for.

The cast of the movie also has some varying degrees of success when it comes to performances. Sting, already a superstar in the music world and having worked with director Franc Roddam previously on Quadrophenia (1979), is passable as the Baron though not entirely engaging; originally, he was supposed to play the smaller part of Captain Schoden, but Columbia executives insisted on him in the lead. In only her second film appearance and first following the success of Flashdance (1983), Jennifer Beals makes for an attractive Eva yet is also mostly competent in the titular role; while she’s certainly game, she won’t make viewers forget about Elsa Lanchester’s iconic take on the role 50 years prior when compared. Clancy Brown, as the monster, gives an amazing performance, ably holding his own with the legendary Boris Karloff and filling his take on the monster with warmth and compassion. As Rinaldo, David Rappaport threatens to walk away with film as his scenes with Brown really bring the film to life (no pun intended) compared to the more superficial relationship between the Baron and Eva. Other notable names and performances in the movie include Geraldine Page as the Baron’s housekeeper Mrs. Baumann, raconteur Quentin Crisp as the ill-fated Dr. Zahlus in the opening scenes, an up and coming Cary Elwes as the captain who catches Eva’s eye at her debut, Timothy Spall (a fellow Quadrophenia co-star) as the Baron’s ill-fated assistant Paulus, Phil Daniels (another Quadrophenia alumnus) as a member of the circus group that Viktor and Rinaldo join, Guy Rolfe as a Count at Eva’s debut ball, and German model Veruschka von Lehndorff in a cameo appearance as the Countess.

The film’s HD transfer preserves the film’s original 1:85:1 aspect ratio; while it’s not listed as such, the transfer is clearly evident of the work Sony takes in making HD transfers. Grain is sturdy and film like with a strong color palette, even skin tones, and great attention to fine details with hardly a scratch or speck of dirt or dust in sight. Clearly another exemplary job by both Shout and Sony in providing an excellent visual presentation that blows previous home video incarnations out of the water.

The original Dolby sound mix is preserved and presented on a 2.0 DTS-HD Master Audio track on the release. Dialogue is strong and clear along with the sound effects and Maurice Jarre’s lush score has strong ambiance and fidelity without being too overpowering. Again, an improvement over the old Columbia DVD.

Commentary by director Franc Roddam – Carried over from the 2001 Columbia DVD, the director goes over the production as well as some ideas that didn’t quite pan out. An informative and engaging track.

Director – An Interview with Franc Roddam (30:06) – In this newly recorded interview, the director shares some anecdotes on the film’s production as well as some personal feelings about the project. In other words, it’s basically an update to the previously recorded commentary.

Monster – An Interview with Clancy Brown (40:50) – Presented in two parts, the actor shares his memories of and a few stories from the production.

TV Spot (0:31) – A brief promo for the movie, presumably taken from either a VHS copy or the EPK.

Misunderstood upon first release, The Bride probably plays better today with it’s pro-woman subplot in conjunction with its splendid production values; while no classic, it’s a fun way to spend two hours with a reworked and interesting take on a staple of horror. Shout’s Blu-ray is a quality affair with great audio and visual presentation along with a couple of strong – if somewhat small – special features to make this recommended for those looking to upgrade or willing to take a chance. 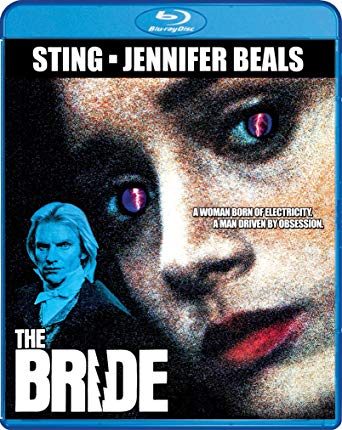