Shout! Factory has released Robert Wise’s 1945 The Body Snatcher on Blu Ray.  The transfer is from a 4K scan done off of the camera negative and is a revelation.  A great movie, in fact a high point of 1940s Hollywood horror looking better than it probably looked in theaters upon first release.

The Body Snatcher takes place in Edinburgh in 1831, only a few years after the Dr. Knox/Burke and Hare incident, where Dr. Wolf MacFarlane (Henry Daniell) is the star professor at the university.  Young Mrs. Marsh brings her crippled daughter Georgina, at the suggestion of specialists from all over Europe, to MacFarlane for consultation.  Mrs. Marsh is told that MacFarlane is Georgina’s best chance.  In a wonderful bit of foreshadowing Mrs. Marsh and her daughter are delivered to MacFarlane’s by cabman John Gray (Boris Karloff).

It is immediately apparent that while the clinical MacFarlane is a brilliant medical mind, he lacks the human touch that makes for a good doctor as Georgina is frightened of MacFarlane and instead responds to MacFarlane’s student, Fettes (Russell Wade).  Fettes is gently able to coax the child to consent to an examination which he conducts with his mentor.  Easily diagnosing the little girl’s condition, MacFarlane begs off performing the necessary but dangerous spinal operation claiming that his role as an instructor supersedes that of practitioner.

After the disappointed mother leaves with her daughter Fettes tells MacFarlane that he must leave the program due to lack of funds.  MacFarlane will hear nothing of this and makes Fettes his assistant.

One of the responsibilities of Fettes’ new position is to accept and pay for cadavers from cabman/resurrectionist Gray.  On his first night he accepts a body that he later learns came from a local graveyard.  When Fettes shares his concern with MacFarlane, he is told that this is price of progress.  The conflicted Fettes accepts this rationalization.

After a chance meeting with Mrs. Marsh and Georgina, Fettes agrees to try and persuade MacFarlane to perform the delicate surgery.  Initially MacFarlane refuses, but after being taunted by Gray he eventually consents.

Fettes slowly learns the source of power that coarse Gray has over the refined MacFarlane and that the bodies delivered are not always from the graveyard.   The tragic MacFarlane will forever be Gray’s prisoner.

The Body Snatcher is based on the Robert Louis Stevenson 1884 short story of the same name. The screenplay adapted by producer Val Lewton, writing under pseudonym Carlos Keith, and Philip MacDonald makes some changes, in the story MacFarlane and Fettes are contemporaries working for the infamous Dr. Knox, but remains true to the themes of the story.  Lewton and MacDonald dramatize minor incidents as well as using dialogue directly from the story.  It is a fine example of the craft of screen adaptation.

In the short story Gray is a minor character.  Lewton and MacDonald’s script expands the character and gives Boris Karloff one of his best screen roles.  Karloff gives the role many shades as he goes from charming in the opening scenes to servile and ultimately to sadistically brutal.  Gray is a character with Shakespearean dimensions.  The multi-layered role is almost the embodiment of 19th century British class conflict.   Karloff is magnificent in the role.  If this wasn’t a B-horror movie it would easily be an Oscar worthy turn as would the movie itself.

Daniell is almost as good as the cold but brilliant MacFarlane.  Bela Lugosi plays MacFarlane’s servant Joseph in what would be the last of eight pairings with Karloff.  Lugosi shines as Joseph, an avaricious but dim man who is no match for the evil Gray.  The scene where Gray shows Joseph how one “Burkes” is not only scary but strangely moving as it is the last scene the two great horror icons share.  The underlying sadness of the scene and of Lugosi’s characterization makes one remember that Lugosi was a much better actor than he is usually given credit for and that this reputation is due to the poverty row schlock he was reduced to for much of his career.  When given the chance Lugosi delivered.

Working with cinematographer Robert DeGrasse, director Robert Wise effectively lights and stages scenes to best effect.  The above-mentioned Karloff/Lugosi scene along with the climax in the buggy racing through the rain storm are great.  But for me, the most effective scene of the movie is murder of the blind singer.  This scene is done with little but an archway, a horse and carriage, shadows and sound.  It is marvel of simplicity and one of the best scenes of Wise’s career.  It is also peak Lewton as it is reminiscent and almost equal to scenes from the earlier Jacques Tourneur directed Lewton films.

Thematically unlike a lot of horror movies which function to preserve order, The Body Snatcher is progressive.  In the Frankenstein films we have a character that is punished because he dares to break the rules and tread in God’s domain.  MacFarlane is a trailblazer whose work is hampered by society’s backward values.  Even his personal life is controlled by societal norms as he has to hide his love for housekeeper Mistress Camden because of a rigid class structure.  In the end, he is punished because society is not ready for his contributions or such changes.

Producer Val Lewton is one of the key figures of 1940s Hollywood films.  His unmistakably distinctive films look better with each passing year.  The refined Lewton was an outsider in an industry created and run by uneducated emigrants who journeyed to America to flee poverty and find opportunity – Lewton’s aristocratic family escaped from revolutionary Russia for political reasons – the same background as one of his stars, Tom Conway (and his brother George Sanders).

Lewton worked with a stock company both in front and behind the camera in a firmly established genre, whose work elevated what at the time had become a somewhat stale and routine assembly line produced product.  As much as I love the Universal horror films of the 1940s, the Lewton’s seem to come from another planet.  The intellectual Lewton was bored with and longed to escape the confines of the horror genre.

Lewton made nine horror films in this period as well as a Mademoiselle Fifi, a period piece based on a Maupassant story and Youths Run Wild, a sympathetic view of the juvenile delinquency problem of the era (I guess every era had a juvenile delinquency problem!).  One could argue that Lewton’s Ghost Ship is closer to Jack London adventure than horror and that Curse of the Cat People is not a horror film at all, but a sensitive psychological exploration of a lonely child, or that Bedlam is more historical drama than horror film.

Shout! Factory’s The Body Snatcher looks incredible.  It is a 4K scan off of the original camera negative.  Blacks are deep and grain is present.  It has been cleaned up and looks as if it could have been shot yesterday; there are times when the images almost glows.  The RKO films were hard to see when I was growing up in Cleveland in the late 60s and 70s.  I didn’t get a chance to see these films as well as King Kong and the Fred and Ginger films until the late 70s when one of the UHF channels picked up the RKO package.  I have also been lucky enough over the years to see many of these in 35mm.  This disc looks better than I have ever seen this movie look before in any format.  It really is a cause for celebration

The DTS-HD MA mono audio sounds great as well.  The underrated Roy Webb’s atmospheric score is loud and clear as is dialogue and effects.  There are English subtitles.

You’ll Never Get Rid of Me: Resurrecting The Body Snatcher – this is a new interview with film historian and writer Gregory Mank.  Mank gives plenty of production information and is insightful when discussing the careers of stars Karloff and Lugosi.

Audio commentary with director Robert Wise and writer and historian Steve Haberman.  The Wise commentary is not scene specific and appears to be audio edited together for interviews.  It mostly covers Wise’s early career.  His comments last about an hour and switches to Haberman for the final twenty minutes or so.  Haberman gives a good amount of production information.  I think these commentaries are ported over from the previous DVD release.

A documentary from the DVD release: Shadows in the Dark: The Val Lewton Legacy.  This was directed by Constantine Nasr who cowrote it along with Steve Haberman.  It’s a good 53-minute documentary featuring various directors and writers talking about Lewton’s contributions to cinema and the influence of his movies on them.  One of the interviewees is Val E. Lewton, Lewton’s artist son.  He is touching when discussing his father and it is sad when he talks about the later years, especially when he tells a story of a production company Lewton tried to get off the ground with Robert Wise and Mark Robson.  I don’t think Wise gives Lewton enough credit when discussing his directing career and comes off badly when Lewton’s son discusses the failed production company.  But then I always find Wise to be self-serving when discussing his involvement with the cutting and shooting of scenes for The Magnificent Ambersons.

There is a trailer along with an image gallery

While I am partial to the Tournuer films, Lewton’s cycle of horror films is that rare series that one could reasonably argue for any single picture being the best.  I couldn’t disagree with Gregory Mank when he says he thinks The Body Snatcher is the best horror movie of the 1940s.  It helps that Lewton was at RKO, a major studio where he was able to recycle sets from A pictures such as The Hunchback of Notre Dame and The Magnificent Ambersons.  Nothing about The Body Snatcher or any of his films looks or feels low-budget. Even when saddled with silly titles, there is an unquestionable intelligence guiding these films.  I can’t wait for future Lewton releases from Shout! Factory. 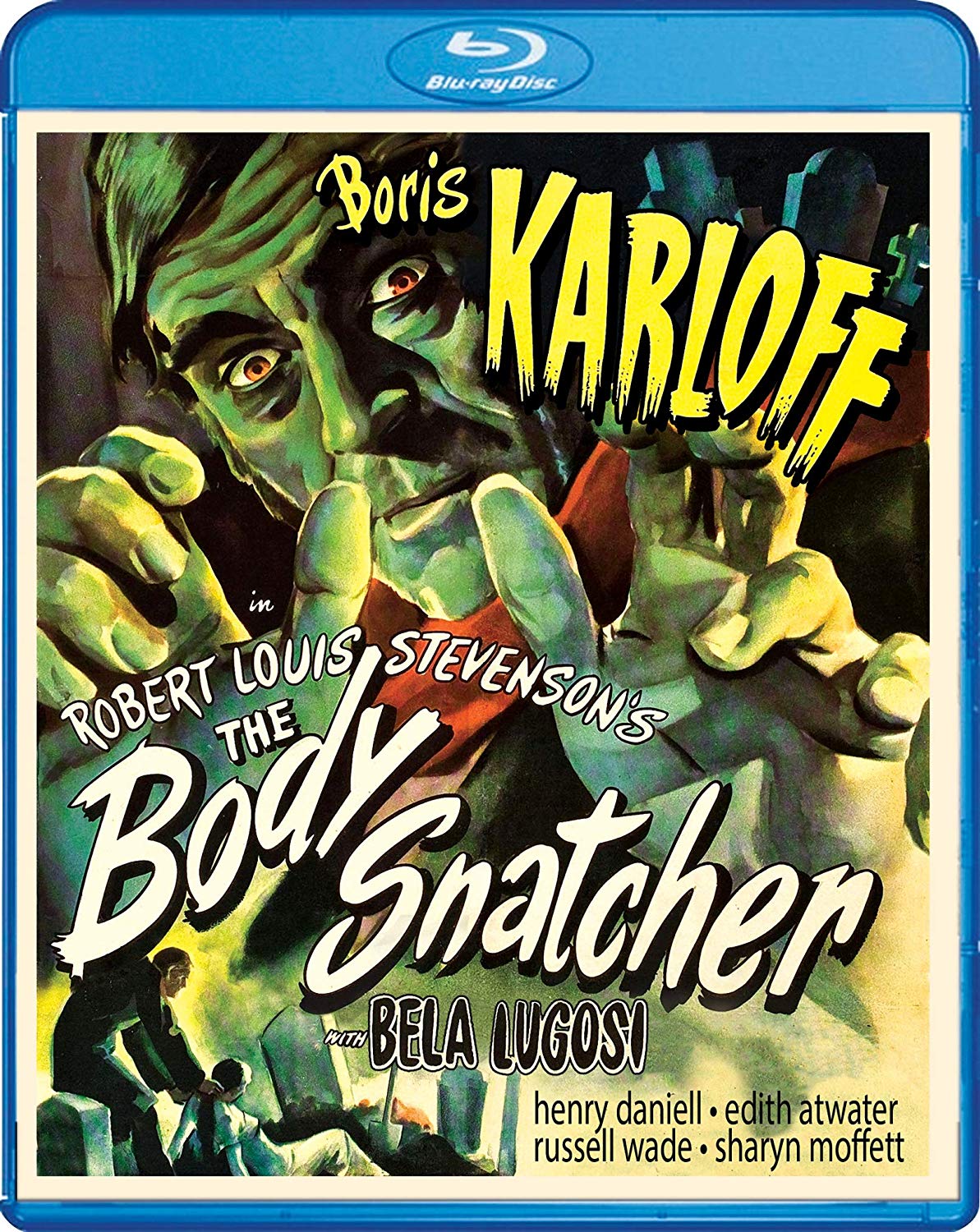