The Black Sleep is an old-fashioned B horror film about a mad doctor which is worth seeing for its exceptional cast of iconic actors. It has arrived on Blu-ray from Kino Lorber with a mostly nice transfer and excellent sound.

The Black Sleep opens at London’s Newgate Prison in 1872. Dr. Joel Cadman (Basil Rathbone), a noted surgeon who has been knighted by the Queen of England, is there to visit a condemned prisoner, Dr. Gordon Ramsay (Herbert Rudley), who also happens to have been Dr. Cadman’s “most brilliant student.” Dr. Ramsay has been convicted of murdering a money lender, a crime which he denies having committed. His death sentence by hanging has included a provision that his body be turned over to Surgeon’s Hall so medical students can dissect it. Dr. Cadman, however, has used his influence to intervene, and he has gotten permission to give Dr. Ramsay a proper burial. Before leaving Dr. Cadman pours some powder into Dr. Ramsay’s water, assuring him that it will sedate him and that he will not feel a thing when he is executed.

The next morning the prison authorities discover Dr. Ramsay’s lifeless body in his cell, so there will be no hanging. In fact, the concoction which Dr. Cadman gave him is a drug from India called Nind Andhera, which Dr. Cadman calls “the black sleep.” The drug causes a person’s body to enter a state of suspended animation, with no evidence of a heartbeat or respiration. Dr. Ramsay is declared to be deceased, and Dr. Cadman takes possession of the body. The coffin is transferred to the home of Odo (Akim Tamiroff), a gypsy who also is a body snatcher for Dr. Cadman’s research. Dr. Cadman injects Dr. Ramsay with an antidote which brings him back to life. Dr. Cadman explains that he has saved the condemned man’s life because he needs a surgeon to help him with his work. Odo is instructed to fill the coffin with rocks and arrange for a suitable burial.

The two doctors then depart for a castle where Dr. Cadman has been conducting his research. The door to the castle is opened by Casimir (Bela Lugosi), a mute servant. Once inside they hear a woman scream. She is Laurie Monroe (Patricia Blair), one of Dr. Cadman’s assistants, and she is being pursued by a deranged man named Mungo (Lon Chaney Jr.). The only person who can control Mungo is Dr. Cadman’s primary assistant, Daphne (Phyllis Stanley). She is able to subdue Mungo before he can do any damage.

Dr. Cadman explains that he is striving to make great advances in brain surgery by conducting experiments to determine to function of each section of the brain. His work has reached the point where he can no longer do it alone, hence the need for Dr. Ramsay’s talents. They begin their work together by cutting open the head of cadaver to probe the man’s brain. All goes well until cerebellum fluid flows out of the brain, an indication that the man is not dead after all. Dr. Cadman then admits that the man is alive and has been put into a black sleep. Following his initial shock Dr. Ramsay is willing to continue with the experiments, but he has second thoughts when Laurie informs her that Mungo is actually her father and that he became a sub-human after he was operated on by Dr. Cadman.

The Black Sleep is the last film which Bela Lugosi worked on, and he died approximately two months after its release. As a mute he has very little to do, but Casimir must be a fairly good servant because the castle is remarkably clean and tidy. Basil Rathbone is quite convincing as Dr. Cadman and seems to be taking the role seriously. Herbert Rudley, a fine character actor with more than 100 film and television credits, turns in a credible performance as Dr. Ramsay. Lon Chaney is genuinely frightening is his few scenes as the out-of-control Mungo. Akim Tamiroff shines in a role which was written for Peter Lorre, who turned it down. Also appearing in the last half of the film are the iconic horror actors John Carradine and Tor Johnson.

The Black Sleep is actually rather tame as mad doctor films go, but fans of the genre will enjoy seeing the interesting cast at work.

The 1080p black and white image is framed at 1.85:1, which apparently is how it was shown in theaters. The framing appears to be slightly tight on top, but the tightness is not distracting. The transfer is in very good shape, with only an occasional speckle here and there. Otherwise the print is free of damage. Sharpness is very good and a natural grain structure has been retained. MGM transfers are sometimes problematic, but this one is quite satisfactory. Contrast is strong and black levels are good. Shadow detail is excellent – in the prison scene Dr. Cadman is wearing a dark coat, and its lapels and seams show up extremely well.

The audio is DTS HD-MA 2.0 stereo. Although IMDB says that the original audio was mono, I am hearing stereo separation in Les Baxter’s score. In any event, the music is evocative and pleasing. Every word of dialogue is clear and understandable, which is helpful because there are no subtitles. There are no age-related anomalies such as hiss, popping, distortion, etc.

The main extra on this Blu-ray release is an excellent, informative commentary track by the always excellent Tom Weaver, who knows more about the making of The Black Sleep than any other living person. It is rather amusing to hear how often the film was mistakenly called The Black Sheep.

Also included is The Black Sleep segment of “Trailers from Hell” with Joe Dante. This is actually a re-release trailer from when the film’s title was changed to Dr. Cadman’s Secret.

The other extras are the film’s original theatrical trailer, as well was trailers for Donovan’s Brain and The Magnetic Monster.

The Black Sleep is by no means a great horror film, and it isn’t “so bad it’s good,” either so it is lacking Ed Wood hilarity. Nevertheless, Basil Rathbone is always worth watching and Akim Tamiroff is excellent as the gypsy who procures “patients” for Dr. Cadman to experiment on. Additionally, it is fun to watch an over the top John Carradine playing a crazed, bearded man who believes that he is a Crusader fighting the Saracens, and to see the huge Tor Johnson clumsily lumbering through his scenes. 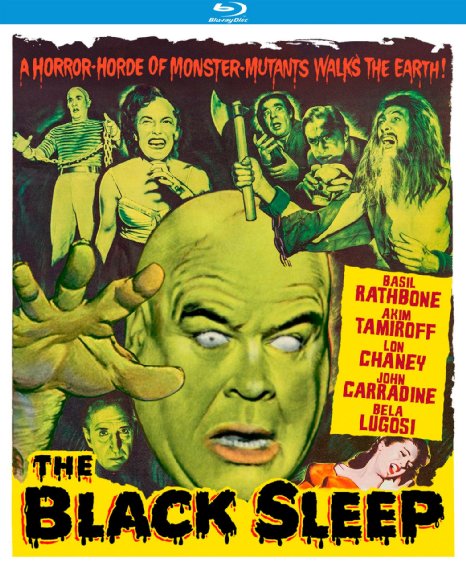