Forum List What's new Dark Style Change width
Log in Register
What's new Search
Menu
Log in
Register
Navigation
Install the app
More options
Dark Style
Close Menu
Posted on July 7, 2019 by t1g3r5fan
You are using an out of date browser. It may not display this or other websites correctly.
You should upgrade or use an alternative browser.
Classic mystery thriller debuts on Blu-ray 4 Stars

While he may be known today as the father of actress Mia Farrow, John Farrow (1904-1963) should be remembered as a talented director and screenwriter over many genres. One of his most notable and well received movies was The Big Clock, a mystery thriller with elements of film noir mixed in for good measure. Previously released by Universal on DVD, Arrow has given the movie its Blu-ray debut as part of their Academy line.

36 hours ago, George Stroud (Ray Milland) was a family man and a magazine editor for one of media tycoon Earl Janoth’s (Charles Laughton) many publications. However, when George is asked to delay his long planned vacation, he quits and embarks on an impromptu night out with Pauline York (Rita Johnson), Janoth’s mistress. When Pauline is found dead, George is asked to return and head up the manhunt for the killer; unfortunately, he may find himself the one framed for the crime and must find the real killer while eluding the authorities…

While it can be considered a film noir, The Big Clock does mix in elements of the mystery thriller and even a little bit of light comedy in for good measure. Screenwriter Jonathan Latimer largely keeps the tone of Kenneth Fearing’s novel intact while also adhering to some of the lighter comic touches present in the movie (much of it happens in the first act before Pauline’s brutal murder). Complimenting the snappy screenplay and John Farrow’s sturdy direction is the work of longtime Paramount production designer Hans Dreier; the massive clock within the Janoth Building which bears the picture’s title towers over the characters and is one of Dreier’s greatest achievements. The film’s use of comedy (largely unforced) does hold it back from being a true film noir in the sense, but that’s only a minor quibble given the outstanding work of everyone involved.

As the troubled Stroud, Ray Milland is very credible as the proverbial man in the middle; he would reprise the role for a radio adaptation of the movie the same year of this film’s release. Charles Laughton dominates every scene he’s in as the tyrannical Janoth; it’s a notable part in the decade and probably the best performance he gave since embodying Quasimodo in the 1939 version of The Hunchback of Notre Dame. Character actor George Macready is solid as Janoth’s right hand man (he’s best known for his villainous turn in 1946’s Gilda); Maureen O’Sullivan (director Farrow’s wife) is decent as Stroud’s wife, unaware of the trouble he’s in. Other notable appearances include Rita Johnson as the ill-fated secretary and mistress of Janoth, Elsa Lanchester as a notably kooky artist, Harry Morgan as another member of Janoth’s inner circle, Harold Vermilyea as one of George’s colleagues, Luis Van Rooten as one of George’s co-workers in the crime publication, Frank Orth, Lloyd Corrigan, Philip Van Zandt, Douglas Spencer, and James Burke as potential witnesses to the crime, and Lois Lane herself – Noel Neill – as the elevator operator in the Janoth Building.

The film’s original 1:37:1 aspect ratio is intact in this HD transfer taken from the original film elements, presumably from a fine grain print or interpositive. Film grain is organic throughout with fine details rendered faithfully and a consistently sturdy grayscale throughout the film. There’s minimal instances of print damage and age related artifacts, which makes this transfer likely the best the movie has ever looked on home video.

The film’s original mono soundtrack is preserved on a 1.0 PCM audio track for this release. Dialogue is strong and clear throughout along with the sound mix, with solid fidelity given to Victor Young’s background score; there’s minimal cases of age related issues making this likely the best the movie will ever sound on home video.

Commentary by film scholar Adrian Martin – Newly recorded for this release, Martin goes over the film as well as the source material and the themes of both in addition to the production itself; a highly informative and insightful track.

Turning Back the Clock (23:01) – In this newly filmed featurette, critic Adrian Wootton goes over the movie and some of the themes presented within.

A Difficult Actor (17:31) – An appreciation of Charles Laughton and his performance by Simon Callow is the main focus of this new featurette.

Lux Radio Theatre Adaptation of The Big Clock (59:28) – A rare 1948 radio dramatization of the movie, with Ray Milland and Maureen O’Sullivan reprising their roles, with William Conrad portraying Earl Janoth.

The Big Clock has not only survived as one of director John Farrow’s best films, but also as an offbeat little thriller. Arrow has done a great job with this release, with not only great marks in both audio and visual quality, but also with a decent slate of special features. An easy recommendation for fans of classic cinema and those looking to upgrade from the previous Universal DVD.

I love this film and previously purchased it as part of Universal's Film Noir: 10-Movie Spotlight Collection DVD. I am very happy to see Arrow release this on Blu-ray. Thank you for the thorough review!
You must log in or register to reply here. 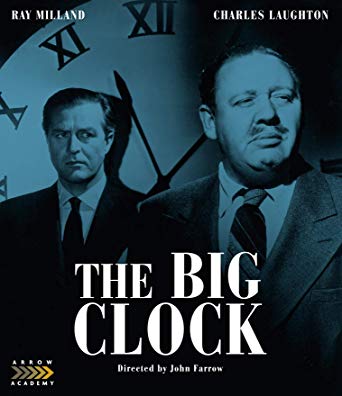