Forum List What's new Dark Style Change width
Log in Register
What's new Search
Menu
Log in
Register
Navigation
Install the app
More options
Dark Style
Close Menu
Posted on July 5, 2019 by Todd Erwin
You are using an out of date browser. It may not display this or other websites correctly.
You should upgrade or use an alternative browser.
Powerful performances 4 Stars

The Best of Enemies is a truth is stranger than fiction movie about how a Klu Klux Klan leader, C.P. Ellis (Sam Rockwell), and civil rights activist Ann Atwater (Taraji P. Henson) forge a friendship as they are forced to co-chair a charrette to determine if Durham, North Carolina public schools should be desegregated in 1971.

When the public school for black children is heavily damaged from a fire, local civil rights activities Ann Atwater (Taraji P. Henson) demands that Durham, North Carolina city council allow the black students to attend the white schools, at least until their school is repaired. City council refuses, forcing the NAACP to file a lawsuit which leads to a court-mandated charrette, a small committee made up of members of the community, to determine if the schools should be desegregated once and for all. In charge of forming the charrette is Bill Riddick (Babou Ceesay), who selects an unlikely duo to co-chair the committee – Ann Attwater and local KKK leader C.P. Ellis (Sam Rockwell). Ellis is also a local business owner who runs a gas station that discriminates by selling fuel only to white patrons. He is an extreme racist, forming youth groups within the KKK and participating in many of their activities, including shooting out a white woman’s house simply because she is dating a black man. As the charrette continues and issues are raised and eventually voted on, Ellis and Atwater begin to bond and eventually become friends as the final votes come in, despite the intimidation members of the KKK place on member of the committee.

What really drives The Best of Enemies are the performances, notably of the two leads Rockwell and Henson. Bruce McGill turns in another solid performance as a racist politician, and Anne Heche is almost unrecognizable as Ellis’ sympathetic wife who wants nothing to do with the KKK. The real controversy of the film, though, is a similar one that plagued Green Book, and that is the movie revolves more around Ellis while Atwater becomes more of a supporting character. To give writer/director Robin Bissell some credit, it is Ellis that undergoes the real transformation here, so I am willing to give the film some slack (but not that much) for making Ellis the central character, but I would have liked to see more of Atwater’s side of the story (which we do get to see in the included documentary short that inspired the film, An Unlikely Friendship).

The Best of Enemies has a definite 1970’s look to it, from its 2.39:1 widescreen aspect ratio to its soft color palette bathed in yellows and greens. Universal’s AVC-encoded 1080p transfer captures that look expertly, with excellent clarity providing details such as the mostly polyester fabrics worn at the time and facial features including sheens of sweat from the humid south. Contrast is also very good, with deep blacks that retain a great deal of shadow details and bright whites that are not blown out. Another great-looking Blu-ray from Universal.

The DTS-HD MA5.1 track handles the material well, considering this is a mostly dialogue-driven drama that relies at times on music of the time. Dialogue is clear and understandable throughout, surrounds are used to fill out the environment with atmospheric sounds and spreading the music throughout the room. LFE is present, used mostly to enhance the lower end of much of the music in the film.

Make a Connection (1080p; 1:46): A behind the scenes trailer (typical of STX releases) centering on the two main characters of the movie.

Ann Atwater (1080p; 2:20): Another behind the scenes trailer (typical of STX releases) centering on Ann Atwater.

DVD Copy: The movie in 480p with Dolby Digital 5.1 audio, plus all of the above special features.

Digital Copy: An insert contains a code to redeem a digital copy on iTunes.

The Best of Enemies has some powerful performances and is an interesting story, although some may find it skirts the issue a bit with making the KKK leader the main character. The big plus in this package is the inclusion of the 2002 documentary that inspired the film. 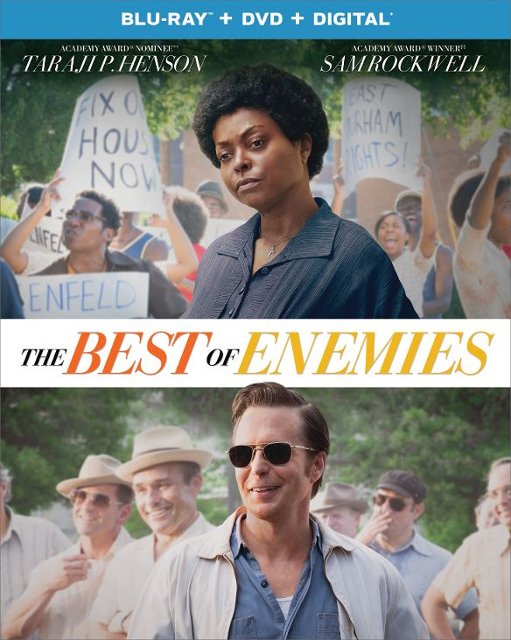