Posted on November 19, 2019 by Matt Hough
Feel good comedy-drama has lost none of its humor or heart. 4.5 Stars

Among the highlights in the careers of Bing Crosby, Ingrid Bergman, and Leo McCarey, The Bells of St. Mary’s finally gets the Blu-ray release it deserves in Olive’s Signature film series.

In Hollywood’s Golden Age, sequels to hit movies were a rare and wondrous thing. They weren’t non-existent: The Thin Man spawned five sequels, and there were scores of movie serials and B-film series like Mr. Moto that pumped out a steady stream of film follow-ups, but A-features, unlike today, typically didn’t offer additional adventures with the characters which audiences had met and enjoyed. One of the unusual exceptions to the rule was Leo McCarey’s The Bells of St. Mary’s, a follow-up to the previous year’s Going My Way which had swept the 1944 Academy Awards ceremony with seven trophies. While not matching its predecessor in award wins, it out grossed the earlier picture by a considerable margin and emerged as the highest grossing movie of 1945. With its top stars, illustrious director, and an episodic storyline that wrung laughs and tears in equal measure, The Bells of St. Mary’s is still fondly celebrated today for its canny mixture of heart and humor with just the right amount of piety folded into the mix.

Father Chuck O’Malley (Bing Crosby) is transferred to the Roman Catholic inner-city school St. Mary’s where he quickly falls into conflict with its headmistress Sister Mary Benedict (Ingrid Bergman). While the pair have minor differences over discipline and the merits of practical versus formal education, their primary disagreement has to do with the deteriorating school itself. Father O’Malley feels it should be abandoned and the children sent to other schools. Sister Benedict and the other nuns, however, believe there is still hope, possibly in the form of charity from a wealthy business owner (Henry Travers) who’s constructing a building next door to the rundown school which would make a perfect new home for St. Mary’s.

Director Leo McCarey provided the story for the film which was then adapted into a screenplay by Dudley Nichols. Its gossamer plot revolves around three principal conflicts: two involving troubled students (Dickie Tyler’s Eddie Breen who’s being bullied and Joan Carroll’s Patsy Gallagher who’s an unhappy pre-teen whose mother, a likely prostitute, doesn’t want her daughter raised in her sordid world) and the other concerning the deteriorating school building on the verge of condemnation. The narrative’s focus ping-pongs back and forth between these problems until all are finally resolved. It takes over two hours to do it, but the lengthy running time is spelled by director MCarey’s expert ability not to drag scenes out past their effectiveness (which includes the school’s first graders’ attempt at a Christmas pageant which likely charmed and cheered war-torn families in 1945) and Bing Crosby’s occasional bursts of song, all highlights of the movie including the title song with the nuns offering stirring counterpoint and the Oscar-nominated “Aren’t You Glad You’re You” as he attempts to teach Patsy to appreciate everything around her. Other songs likewise underline the narrative focus of scenes including Bing’s “The Land of Beginning Again” which gently preaches to Patsy’s reunited father (William Gargan) and mother (Martha Sleeper) the joys of a new start and Ingrid Bergman’s Swedish lullaby “It’s Spring.” While McCarey and Nichols rarely put a wrong foot forward, they do slide off the tracks near the film’s end when a health issue involving Sister Benedict is withheld from her for no sensible reason, but it does allow the story to wring one final tear from the viewer.

Bing Crosby reprises here from Going My Way his Oscar-winning role as Father Chuck O’Malley, and he’s just as laidback as ever as the gentle, kindly priest with nary an ill word to say to anyone. It’s no wonder Ingrid Bergman became the most popular actress in the world after her performance in this movie; in this film, she seems lit from within in a heavenly performance that won her awards from the New York Film Critics Circle and the Golden Globes. Her priceless sequence as she teaches the bullied Eddie the intricacies of boxing is one for the ages. Henry Travers tries his best to be a miserly malcontent as Horace Bogardus, but his underlying kindness is hard to disguise (he’d find the angel Clarence more his speed the next year in It’s a Wonderful Life). Joan Carroll is sweet and appealing as the struggling Patsy Gallagher, and Dickie Tyler gets to triumph memorably over his bully once he takes the sister’s boxing lessons to heart. Ruth Donnelly as Sister Michael, Martha Sleeper as Patsy’s mother, Una O’Connor as the school’s wary housekeeper, and Rhys Williams as Dr. McKay all contribute nicely to the film’s uplifting tone.

The film’s original theatrical aspect ratio of 1.37:1 is faithfully rendered in this 1080p transfer using the AVC codec. Compared to Olive’s earlier Blu-ray release, this one is more velvety smooth than the somewhat digitally enhanced earlier effort (we also get to see the RKO Studio credit in the main titles for the first time on home video), and the grayscale is definitely more balanced across the frame. There are no stray specks and flecks as in the earlier Blu-ray, and the entire film is simply more pleasurable to watch. The movie has been divided into 8 chapters.

The DTS-HD Master Audio 2.0 mono sound mix (which won the film’s sole Oscar in 1945) is strong and clear. There are no age-related problems with hiss, crackle, pops, or flutter, and the dialogue, background score (arranged by Robert Emmett Dolan), and sound effects are blended together seamlessly. Bing’s baritone sounds especially mellow and lustrous in this audio encode.

Audio Commentary: Bing Crosby biographer Gary Giddins offers an entertaining overview of the film and the careers of its principal participants.

Faith and Film (17:22, HD): Sister Rose Pacatte offers a critical analysis of the film especially in terms of its handling of faith-based issues in the movie.

Before Sequel-itis (7:37, HD): film critic Emily Carman discusses the movie as a sequel to Going My Way.

Essay: Abbey Bender’s analysis of the movie, which is also found in the enclosed booklet, can be read on seven individually advanced pages on the disc.

Among the highlights in the careers of Bing Crosby, Ingrid Bergman, and Leo McCarey, The Bells of St. Mary’s finally gets the Blu-ray release it deserves in Olive’s Signature film series. The audio and video quality of the movie are first-rate, and the new bonus features are certainly worth a look and a listen. Highly recommended! 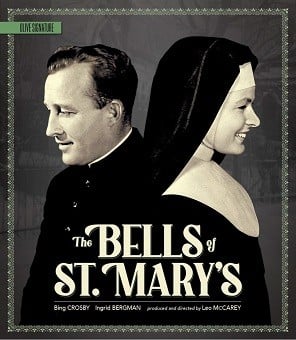