The Angry Birds Movie 2, much like its predecessor, is an oddly funny family film, likely more enjoyable to the younger set.

After the conclusion of The Angry Birds Movie, Red (Jason Sudeikis) is now hailed as a hero for leading the inhabitants of Bird Island to defeat the Pigs from Pig Island. But Red is beginning to feel insecure, especially when the leader of Pig Island, Leonard (Bill Hader), begins sending balloon-grams requesting a temporary truce after his island is being attacked with ice bombs, hoping the Birds will come to their rescue. Meanwhile, Chuck (Josh Gad) and Bomb (Danny McBride) try to distract Red by taking him to a Speed Dating event on the island where Red meets Silver (Rachel Bloom), and the two determine that they are not compatible. When the truce is made official, Leonard and Red quickly form a team to investigate Eagle Island, where the ice bombs seem to be originating from. The team consists of Chuck, Bomb, Leonard’s assistant Courtney (Awkwafina), Pig inventor Garry (Sterling K. Brown), Mighty Eagle (Peter Dinklage), and, you guessed it, Silver, who turns out to be Chuck’s younger and much smarter sister. Behind the diabolical scheme on Eagle Island is a tall and rather fluffy bird named Zeta (Leslie Jones), who wants to turn the two islands into her warmer climate vacation homes, but she has a secret reason for wanting revenge on the two islands (although most will se that coming a mile away).

Like the first film, I went into The Angry Birds Movie 2 with low expectations. The first film was funny, but Red wasn’t angry anymore, so how were the creators going to pull this one off? As it turns out, Zeta and her minions of birds (mostly eagles – which is a dead giveaway to the plot reveal) is a worthy opponent to the Birds and Pigs, as she is really off her rocker. There is also an interesting relationship between Red and Leonard as they learn at first to become frenemies and eventually friends once the mission is over. Of course, there are lots of uses of bathroom and other low-brow humor (the men’s room scene had us howling as we viewed it during our weekly family movie night) and word play, along with homages to other movies (most notably the first Mission: Impossible). The animation is very good, not quite at the same level as Pixar or DreamWorks, but very close, with great uses of bright vivid colors.

It can be assumed that, as with most animated films these days (Toy Story 4 being the major exception), The Angry Birds Movie 2 was rendered and completed as a 2K digital intermediate. Sony’s 2160p upscale adds HDR10 color grading that places this disc far superior to the not too shabby Blu-ray edition that is included with this set. Detail is exceptional, with each strand of hair within each feather is razor sharp, and the rock textures of Zeta’s lair are another example. Where the disc really outshines the Blu-ray is in its color palette, greatly expanded and much more robust thanks to HDR. This disc is also Sony’s first “IMAX-enhanced” release, per the press release and slip cover, but no mention on the disc (unless the equipment used needs to be IMAX-enhanced compatible).

The UHD disc of The Angry Birds Movie 2 includes a DTS:X Master Audio track that, frankly, is a bit of a disappointment. While there is a sense of immersion with height channels and surrounds, there just is now real WOW factor that one would expect from a so-called IMAX-enhanced release. It is a slight improvement over the 5.1 DTS-HD MA track on the Blu-ray, but not by much. LFE is anemic, particularly during the lava ball explosions during chapter 11 (this is evident on both the UHD DTS:X and Blu-ray DTS-HD MA 5.1). To give the track some credit, dialogue is clear and understandable throughout.

With the exception of the Mini-Movie, all of the special features can be found on the Blu-ray disc.

All New Mini-Movie! Live Stream (1080p; 2:41): Silver tries her hand at live web video streaming. Included on both the UHD and Blu-ray editions.

Bird Watching (1080p; 10:04): Zoo keepers from the Los Angeles Zoo introduce us to various species from their collection.

Hatching the Hatchlings (1080p; 5:19): Expanding the role of the adorable little chicks introduced in the first film.

Happy Thanks-Pigging! (1080p; 1:25): Zeta tries to convince viewers to eat something other than turkey for Thanksgiving (possibly ham?).

The Angry Birds Movie 2 was a surprisingly funny and fun movie, and the video presentation on UHD is phenomenal. 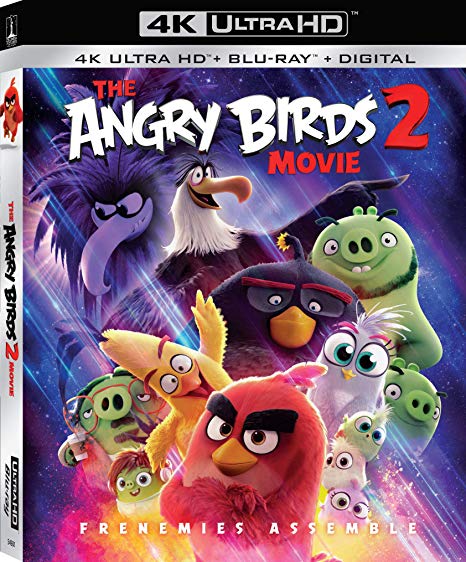