Forum List What's new Dark Style Change width
Log in Register
What's new Search
Menu
Log in
Register
Navigation
Install the app
More options
Dark Style
Close Menu
Posted on March 2, 2021 by Todd Erwin
You are using an out of date browser. It may not display this or other websites correctly.
You should upgrade or use an alternative browser.
Forgettable 1980s Coming of Age Movie 3 Stars

Kino Lorber brings the forgotten 1980s Susanna Hoffs vehicle The Allnighter to Blu-ray for the first time here in the US.

It’s two days before graduation from Pacifica College, roommates Molly (Susanna Hoffs), Val (Dedee Pfeiffer), and Gina (Joan Cusack) celebrate the end of four years together. Gina is making a video, recording interviews with her classmates. Val thinks she has found her future husband in salesman Brad (Phil Brock). But Molly, who has been tasked with writing a valedictorian speech but has writer’s block due to lamenting that after four years she never had a meaningful romantic relationship, although she secretly longs for fellow classmate C.J. (John Terlesky) who hangs out at the girls’ beach house with his surfing partner Killer (James Shanta). C.J. may be interested in her, too, but is too clueless to make the first move. Enter washed-up rocker Mickey (Michael Ontkean), who stops by to see the house where he used to live with his bandmates. Mickey is just there to reminisce, but after a quick dance to one of his band’s former hits, Molly begins to think that maybe something is there between her and the much older Mickey. Will Molly find love before the movie ends, and with whom?

When The Allnighter very briefly hit movie screens in May of 1987, it was overwhelmingly panned by critics and ignored at the box office (it all but disappeared in its second week). What was supposed to launch an acting career for Susanna Hoffs of the 1980s all-girl rock band The Bangles became a mostly forgotten movie. There is good reason for it, too. Susanna Hoffs’ performance as Molly is stiff, her line readings almost cringe-worthy. Dedee Pfiefer (currently on ABC’s Big Sky) and particularly Joan Cusack (her first major role after smaller roles in Sixteen Candles and Class and one season of Saturday Night Live) fare much better. What makes the movie weird, though, is the fact that it was co-written and directed by Tamar Simon Hoffs, the mother of Susanna, something that did not sit well with many critics at the time, especially during scenes with Susanna in her underwear and a love making scene in the third act. Those sequences are not as exploitative as some critics made them out to be (which is discussed in great detail in the newly recorded commentary track by Senses of Cinema critics Alexandra Heller-Nicholas and Josh Nelson), but they are still somewhat uncomfortable for most viewers who know that tidbit of trivia. The script by the elder Hoffs and Margot Kessler feels incomplete with its very thin plot and cardboard characters, and Hoffs direction is uneven with its blending of drama and comedy (which very frequently falls flat). To be fair, though, one has to wonder if this movie was ever really meant to have a theatrical release based on the copyright holder – MCA Home Video – rather than Universal Studios.

The Allnighter makes its Blu-ray debut courtesy of Kino Lorber (licensed by Universal). The 1080p AVC-encoded transfer, which retains the movie’s 1.85:1 theatrical aspect ratio, appears to have been taken from an older 2K master, likely created for broadcast and DVD back in 1999. There is a hint of overall softness to the image, which becomes much more noticeable in wider shots. Many daylight scenes appear slightly blown-out, which I can’t tell if those shots were simply over-exposed when photographed or the exposure of the scan was set too bright. Darker sequences don’t fare well, either, with crushed blacks that also obliterate background details. On a positive note, the image is mostly free of any dirt, debris, and scratches (although I did notice one or two instances of a pinhole that lasted one frame), and no obvious edge-enhancement.

The DTS-HD Master Audio 2.0 stereo track is your typical 1980s-era low budget Dolby Surround mix. There is no real “discrete” surround activity here, with music and atmospheric effects extended to the rears. The front soundstage is fairly narrow, with minimal stereo separation, yet dialogue is clear and understandable throughout.

Audio Commentary by Star Susanna Hoffs and Co-Writer/Director Tamar Simon Hoffs: Ported from the 1999 DVD release by Anchor Bay, daughter and mother discuss the production, including locations (the exterior of the girls’ beach house was the Hoffs’ residence at the time of shooting), casting, etc.

Audio Commentary by Film Historians Alexandra Heller-Nichols and Josh Nelson: Newly recorded for this release, the film critics/historians from the Senses of Cinema website discuss at length the film’s production, the director’s career, how the mother-daughter team worked on the film, along with critical and public reactions to the film. The two hold this film in much higher esteem than it deserves.

Music Video No T.V. No Phone by Price-Sulton (480i; 4:38): The typical 1980s movie tie-in music video, directed by Tamar Simon Hoffs, that includes plenty of clips from the movie.

Die-hard fans of musician Susanna Hoffs will likely want this in their collection (even though she does not perform any songs in the film), or rabid fans of 1980s nostalgia, but it is the commentary tracks that make this worth owning.

is there an option to watch just the scenes of her in various states of undress or on the beach?
J

Radioman970 said:
is there an option to watch just the scenes of her in various states of undress or on the beach?
Click to expand...

The main reason chapter search or fast forward was created- she is pleasant to look at, to say the least.

i could watch her eyes looking at stuff for 90 minutes.
You must log in or register to reply here. 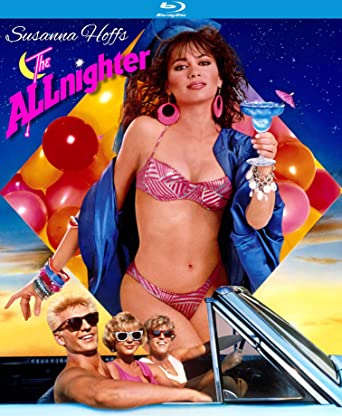