Forum List What's new Dark Style Change width
Log in Register
What's new Search
Menu
Log in
Register
Navigation
Install the app
More options
Dark Style
Close Menu
Posted on January 1, 2019 by Josh Steinberg
You are using an out of date browser. It may not display this or other websites correctly.
You should upgrade or use an alternative browser.
An early CinemaScope adventure that’s still fun. 3.5 Stars

The Adventures Of Hajji Baba, from Walter Wanger and Allied Artists, is not a particularly great film, but it is a fun one. Though its approach to casting and historical storytelling would be considered dated by today’s standards, viewers who can appreciate the film in the context of its time will enjoy Twilight Time’s Blu-ray release.

The Adventures of Hajji Baba stars John Derek in the title role, a Persian barber who wishes to leave his father’s shop to seek fame and fortune for himself. Meanwhile, Princess Fawzia (Elaine Stewart), is rebelling against an arranged marriage that her father has set for her. It’s not long before Hajji and the princess cross paths, with a case of mistaken identity serving as the conduit to join their paths. Before long, the two develop feelings for each other, and Hajji must escort the princess to safety, and the princess must find her way out of her arranged marriage before she becomes trapped.

Producer Walter Wanger chose The Adventures of Hajji Baba as his next film project in part because of the popularity of its source material, an 1824 novel by James Justinian Morier that had remained in print for over a century; having a built-in audience always helps. Wanger brought on Richard Collins to write the film’s screenplay, and Collins discarded much of the novel’s original narrative, but kept the title character and his occupation intact. The direction, by Don Weis, is effective without being flashy. Thanks to the use of the then-new CinemaScope lenses (on loan from Fox) and a score by Dimitri Tiomkin, the film looks and sounds better than its production values might otherwise indicate. Though the title song (sung by Nat ‘King’ Cole) is repeated too often in the film, the music and widescreen photography give what’s ultimately a B-movie adventure a more A-list appearance.

Finally, this is a film that must be viewed in its original context if it is to be enjoyed by a modern audience. Though the film’s practice of casting white actors in non-white roles was standard industry practice at the time, viewers unprepared for this may be turned off by the choice. However, with its obviously Californian settings doubling for Persia, this isn’t a film particularly interested in realism. And though the filmmakers might be guilty of making a silly film, there doesn’t seem to be any malice or stereotyping in the portrayal of the characters. It’s probably best to treat the film as the fantasy it is rather than looking for anything deeper.

The film is presented in its original theatrical aspect ratio of 2.55:1. The transfer, provided by Twentieth Century Fox, is perfectly clean and very steady. Overall, the transfer is not as sharp or colorful as might have been expected, but this is almost certainly correct; the slight touch of softness is consistent with the look of the early CinemaScope lenses. If the transfer isn’t quite demonstration material, it’s still a wonderfully solid presentation that appears accurate to the period in which the film was made.

There are two audio tracks included with the film, both in the lossless DTS-HD MA format. The first and best option is the 5.1 surround track, but a 2.0 stereo track is also included. Both are clean and crisp, with no age-related artifacts present. The 5.1 track offers a wider soundstage. Though the dialogue is mostly centered, and though the track in general is front-oriented, the musical score takes advantage of the extra channels and sounds appropriately lush.

Isolated Music & Effects Track – Dimitri Tiomkin’s score and title song are presented in the lossless DTS-HD MA format. Effects are also included but are not obtrusive.

Booklet – Julie Kirgo contributes the usual insightful essay (and seems very amused by the choice of film), which is supplemented by production stills and original poster art.

The Adventures of Hajji Baba is an entertaining, if forgettable, CinemaScope adventure film. Everything here is “good enough,” from John Derek’s performance in the title role to Wanger’s production and Weis’s direction. The film’s shorter running time and simple charms make it an enjoyable bit of escapist fun, and the presentation by Twilight Time is first rate.

A note about the packaging from Twilight Time: This title was delivered to us from our supplier with a blue colored case, not the clear case as pictured.  When you purchase this title we will automatically add a free clear case to your order that you can use if you wish.

Thanks for the review. I described this film in a different thread as "silly and feeble" and it seems you don't disagree! As you point out, it needs to be approached with the right perspective by someone in the right mood. I'm always in the right mood for Elaine Stewart! I regret very much that she didn't become a big star.

For me, this was the perfect Saturday or Sunday afternoon kind of movie. While I didn't see this specifically when I was a kid, it reminds me of the kind of movie that I'd find on WPIX in New York when I was growing up.

He was gorgeous, the women were gorgeous; eye candy for everyone.

John Derek had some beautiful wives! 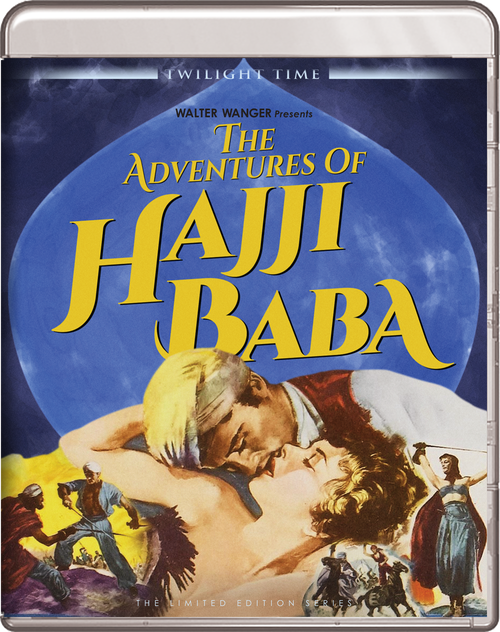