Forum List What's new Dark Style Change width
Log in Register
What's new Search
Menu
Log in
Register
Navigation
Install the app
More options
Dark Style
Close Menu
Posted on February 14, 2021 by t1g3r5fan
You are using an out of date browser. It may not display this or other websites correctly.
You should upgrade or use an alternative browser.
Dean Martin western comedy debuts on Blu 3.5 Stars

At one point during the late 1940’s and early 1950’s, director Michael Gordon seemed destined to crack the upper tier of Hollywood directors with films like An Act of Murder (1948), The Lady Gambles (1949) and Cyrano De Bergerac (1950). However, his career was interrupted by the blacklist, which halted his career for nearly the rest of the 1950’s until producer Ross Hunter hired him to direct the classic romantic comedy Pillow Talk (1959). This kickstarted a second act primarily as a director of light comedies, of which Texas Across the River was among them. Kino has licensed the film for its Blu-ray debut.

In 1845 Louisiana, the wedding of Phoebe Ann Naylor (Rosemary Forsyth) to Don Andrea Baldazar (Alain Delon) is interrupted by a scorned lover in the US Calvary Dragoons who wants Phoebe’s hand in marriage for himself. After the spurned suitor accidentally dies during a duel, Don Andrea goes on the run after being falsely accused of murder; he joins up with trek guide Sam Hollis (Dean Martin) and his Indian sidekick Kronk (Joey Bishop) en route to the Republic of Texas (prior to annexation and statehood). Along the way, the two uneasy partners have to deal with their cultural differences, a band of warring Comanches and eventually each other when both are competing for Phoebe Ann’s affections; all is resolved after the Calvary arrives and a rip roaring, no holds barred fight that engulfs the entire Texas settlement!

In the second act of his directorial career, Michael Gordon proved to be adept in handling light comedy and Texas Across the River is certainly no exception. Several of the slapstick scenes here have an enjoyably goofy touch (especially the climatic duel at the end of the movie) and Gordon maintains a steady if not always breezy pace. Also, the script pokes fun at several at the traditional tropes of Westerns – including gender roles – in a way that’s clever and humorous as well. If there’s only one thing that does hinder the movie is the fact the some of the gags and jokes are either unevenly distributed or don’t really hit the mark; if you want to go a little further, the casting of some of the actors in Native American roles here does bring up the question of whitewashing (but I won’t go any further than that here). Other than those little quibbles, Texas Across the River is a consistently humorous little romp that has flown under the radar; while it’s not as hilarious as Blazing Saddles, it still gets some good mileage from the majority of its comic situations.

In one of his few excursions into the western genre, Dean Martin holds his own as trail scout Sam Hollis; the role actually works well with his usually laid back persona. Also making the most of his time is Alain Delon – in one of his few excursions into Hollywood – as Don Andrea; ironically, this was one of the “Latin lover” roles he was trying to break out of in France during the 1960’s. fellow Rat Packer Joey Bishop doesn’t really have many laughs here as Kronk (played in “redface”); Peter Graves also doesn’t really have much to do here as the commanding officer of the Dragoon troop on Don Andrea’s trail while Rosemary Forsyth and Tina Aumont (billed here as Tina Marquand) serve as the chief love interests of Hollis and Don Andrea. Rounding out the cast here are Don Beddoe as Phoebe Ann’s father, Stuart Anderson as the ill fated Yancy Cottle losing the duel for Phoebe Ann’s hand in marriage, Michael Ansara and Linden Chiles as a Comanche father and son whose attempts to attack the Texas settlement always backfire, Andrew Prine as the lieutentant whose false accusation of murder kicks the story into gear and Richard Farnsworth as a Comanche medicine man.

The film is presented in its original 2:35:1 Techniscope ratio for this Blu-ray release. Film grain is organic with color palette, skin tones and fine details are all given a faithful representation. There’s minimal problems with dirt, scratches or tears presents here, which means that this is likely the best the movie will ever look on home video and an improvement on the previous Universal MOD DVD.

The film’s original mono soundtrack is presented on a DTS-HD Master Audio track for this release. Dialogue is strong and clear, with sound effects and Frank De Vol’s score (including the title song sung by the Kingston Trio) each given a faithful representation and presentation as well. There’s very minimal instances of crackling, hissing, popping or distortion present, making this likely the best the movie will ever sound on home video.

Commentary by film historian Samm Deighan – Recorded for this release, Deighan talks about the movie’s production history, some of its subversive qualities and a little bit about the careers of the cast and crew.

As a comedic western, Texas Across the River has hit the bullseye often enough to warrant a status as an underappreciated film that’s worth another look. Kino continues its run of quality Blu-ray releases here with another solid HD transfer and an informative commentary track to go with it. Highly recommended and worth upgrading from the MOD DVD.

I've read or heard that Dean Martin would watch westerns all day long during the last years of his life.

I used to have a 35mm print of this movie. It was not particularly sharp, probably because Techniscope is a 2 perf system. It'll be interesting to see the Bluray.
You must log in or register to reply here. 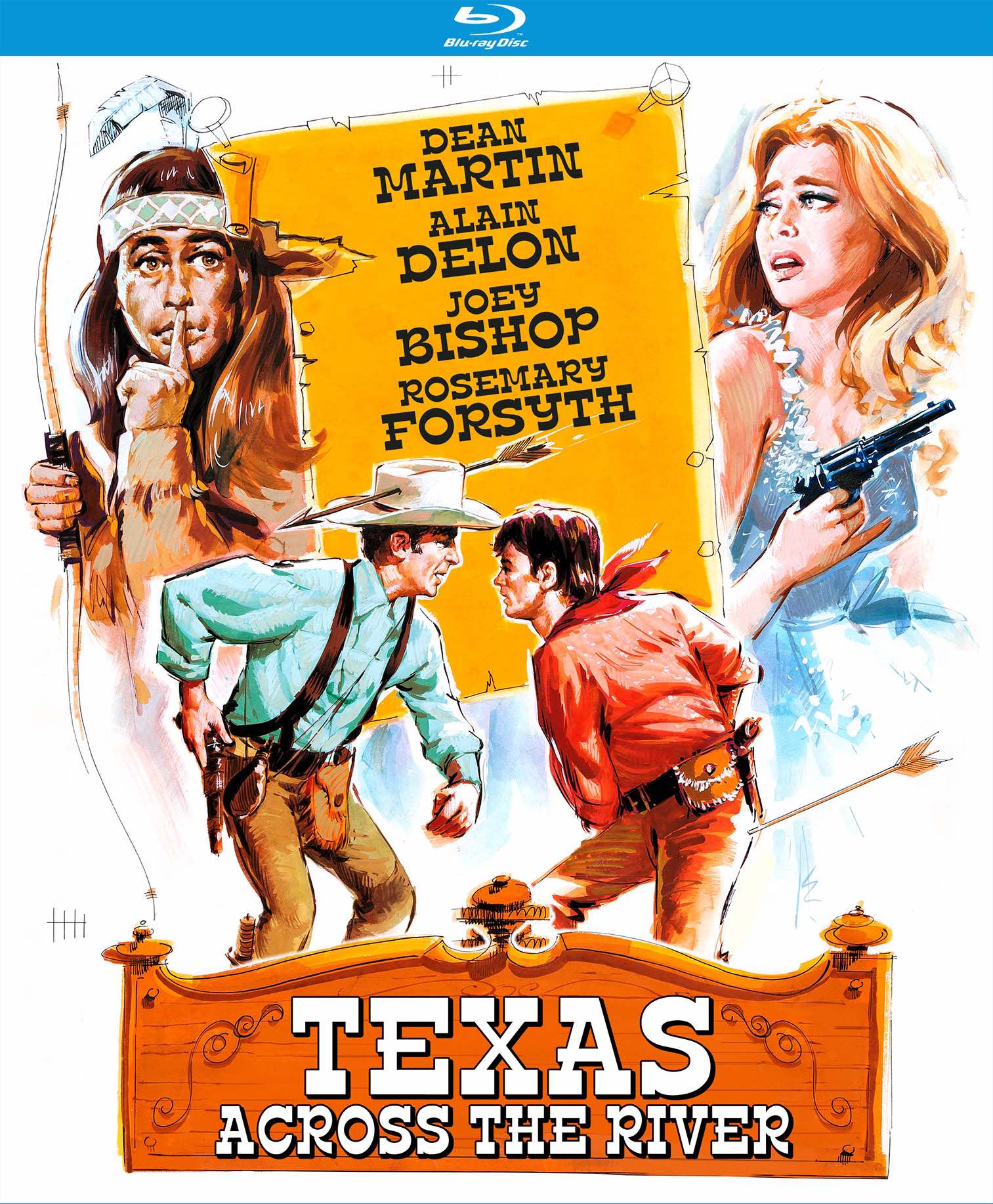