Posted on April 11, 2016 by Matt Hough
Interesting domestic drama gets sidetracked by an abysmal transfer 2.5 Stars

Though its title might suggest a sleazy exploitation programmer cranked out by American International or Allied Artists, Edmund Goulding’s Teenage Rebel is actually an A-list domestic melodrama with high class talent making a screen version of a hit Broadway play.

Though its title might suggest a sleazy exploitation programmer cranked out by American International or Allied Artists, Edmund Goulding’s Teenage Rebel is actually an A-list domestic melodrama with high class talent making a screen version of a hit Broadway play. Historically, it was also the first of 20th Century Fox’s Cinemascope films shot in black and white rather than color, and while the intimate drama didn’t really need Cinemascope which really seems to amplify the magnitude of the sets and production, the actors nevertheless manage to put over the spotty material as best they can, and it’s directed by one of the true Hollywood veterans in his penultimate movie.

Dodie McGowan (Betty Lou Keim) comes under protest to stay with her mother Nancy Fallon (Ginger Rogers) in San Francisco for the legally required three weeks a year while her father (John Stephenson) is remarrying and going on his honeymoon with his new wife (Irene Hervey), all of this unknown to Dodie. Mother and daughter hadn’t seen each other for eight years as the father had been chosen by Dodie at the time of her parents’ divorce and had taken her to live subsequently in Europe. Dodie’s cold aloofness and cutting condescension makes Nancy’s new life with husband Jay (Michael Rennie) and son Larry (Rusty Swope) disrupted and tumultuous as the mother leans over backwards trying to assure her daughter of her love and concern. Only when neighbor Dick Hewitt (Warren Berlinger) begins taking a genuine interest in her does Dodie’s icy shell begin to melt as she begins to understand that no one is against her and all are eager to be friends if she will only meet them halfway.

Based on the play A Roomful of Roses by Edith Sommer, the screenplay by Walter Reisch and Charles Brackett doesn’t really address how a mother could go eight years without any communication at all (letters, gifts on birthdays and holidays, phone calls) with a daughter she purports to love. Instead, the screenplay focuses on the very unhappy young lady: lonely and isolated from all, mostly of her own doing as she fabricates situations and relationships that we’re intended to know aren’t true and takes pleasure in putting down anyone and everyone with the kind of superior demeanor that makes her a very unappealing central character. Young love thaws the ice, of course, and once that occurs, the mother who was such an anathema to her now becomes her confidante and advisor, at least until things fall apart for the movie’s third act. Director Edmund Goulding, who made quite a career from directing melodramas where one-on-one face-offs between central characters were especially powerful (Grand Hotel, Dark Victory, The Great Lie, The Razor’s Edge), milks each of the mother-daughter confrontations here with his special kind of enveloping magic. Pictorially, the movie doesn’t use Cinemascope innovatively (it was Goudling’s first experience using the widescreen process), but the actors are good enough to work through the mundane set-ups. Even a drag race and a house party that spills out onto the lawn don’t have much going for them cinemagraphically, but by then we’re too interested in the characters to care.

Ginger Rogers has some choice moments as the concerned mother who wants to be there for her daughter now at this crucial juncture in her life, but though she’s top-billed, the story really revolves around daughter Dodie played by Betty Lou Keim who reprises her Broadway performance in this screen version. While aspects of her performance do appear too studied and rote (this is especially true in her earliest scenes), there are some spontaneous moments (falling over backwards off a soda shop stool and in her first flushes of excitement when she learns how to dance) which seem genuinely heartfelt. Michael Rennie doesn’t have a lot to do as the loving husband, but he’s as reliable and sturdy as ever in his scenes. Warren Berlinger, also from the Broadway edition and making his screen debut, plays again the romantic partner for Dodie, Dick Hewitt, though his third act complication that brings the house of cards tumbling down seems much ado about nothing nowadays. The always wonderful Mildred Natwick plays his gossipy mother Grace, wasted in a role that comes and goes all too infrequently, and Louise Beavers as the Fallon’s housekeeper is another welcome sight. In fact, when she pushes the face of the Fallon’s bratty young son Larry (a strident, braying Rusty Swope giving an unbridled, bad performance) into a cake after he’s caught licking all the icing off the top, it makes for one of the movie’s most unforgettable moments.

The film’s original Cinemascope aspect ratio has been cruelly reduced to pan and scan dimensions of 1.33:1. Thus, as is typical with this process, people are cut in half or disembodied voices who are never seen are heard talking in the scene with another character as almost half of frame is lost at any one moment. Sharpness is always compromised with the process, and the grayscale is erratic in this ancient transfer, too, as milky contrast often makes for grayish black levels and whites that seem less than clean. There are specks and damage present as well throughout the presentation as well as lots of aliasing due to the lack of anamorphic enhancement. The movie has been divided into chapters every ten minutes so this movie has 10 chapters.

The Dolby Digital 2.0 stereo sound mix offers some suggestions of the directionalized dialogue that was likely present in the original multi-track sound design, and the speech is always clear and easy to discern. Leigh Harline’s music accentuates the film’s high points nicely, and sound effects are woven into the fabric of the mix to maximize their effectiveness without ever overpowering any other sound elements. The volume level of the encode might require some downward adjustment though it’s not quite as loud as many Fox Cinema Archive releases.

Even with its flaws, Teenage Rebel offers an interesting domestic drama that fans of its stars would want to see play out, but the abominable pan and scan transfer doesn’t do the film any favors by not presenting the original widescreen compositions featuring the carefully delivered performances by a stellar cast. 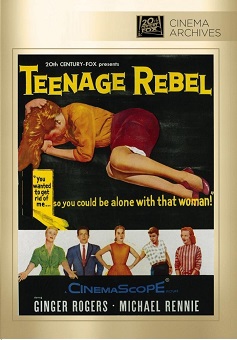