Leonardo, Raphael, Michelangelo, and Donatello return in Teenage Mutant Ninja Turtles: Out of the Shadows, a sequel that plays more like a Transformers movie than a Ninja Turtle film, once again battling Shredder and a new foe, Krang, who is bent on taking over our world with his mutant army.

Taking place one year after the first film, Leonardo (Pete Ploszek), Raphael (Alan Ritchson), Michelangelo (Noel Fisher), and Donatello (Jeremy Howard) are still fighting crime from the shadows of New York, but also living in the shadow of Vernon Fenwick (Will Arnett), who took credit for defeating Shredder (now played by Brian Tee) and is enjoying his newfound fame a little too much. April O’Neil (Megan Fox) is working undercover (for whom we are never really told), supplied with tech gadgets designed by Donatello, keeping a close eye on scientist Baxter Stockman (Tyler Perry), who is secretly working for Shredder, planning on a way to release him from jail. When April discovers that Shredder is being transferred to a maximum security facility, along with criminals Bebop (Gary Anthony Williams) and Rocksteady (Stephen Farrelly), the Turtles are in hot pursuit in their souped-up Garbage Truck (complete with high-tech surveillance and weapons) in a scene reminiscent of the freeway chases in producer Michael Bay’s Transformers and The Island, but Shredder’s army, The Foot Clan, succeed in teleporting Shredder out of the armored transport vehicle. However, Shredder is intercepted by Krang (voiced by Brad Garrett), who wants to enlist the escaped convict to retrieve three pieces of a device Krang sent to Earth many, many years ago so that he can take over the planet. To assist Shredder, Krang gives him a purple mutagen ooze to help create an even stronger army. When Shredder is returned to Stockman’s laboratory, he uses the ooze on Bebop and Rocksteady, who are transformed into a boar and a rhino, respectively, and are sent to retrieve the items Krang is looking for. This is all witnessed by April, who is discovered and chased by The Foot Clan, but not before stealing a vial of the purple ooze. While being chased, she runs into Casey Jones (Stephen Amell), who was suspended for allowing Shredder to escape, and has since become a vigilante, trying to hunt down Bebop and Rocksteady to return them to prison. Instead, he mistakes the Turtles, who have come to April’s rescue, as alien creatures. April sorts it all out, and they venture down into the sewers to the Turtles’ lair, where they meet father figure Splinter (voiced by Tony Shalhoub), a giant mutated rat. The Turtles, though, are suffering from some major sibling rivalry as well as feeling like outcasts, which causes a rift between them. When they learn of Krang’s evil plot, and as Krang uses the reconstructed device to arrive on Earth, the Turtles must band together, possibly revealing themselves to the world, in order to defeat Krang and Shredder.

Teenage Mutant Ninja Turtles first arrived as a series of comic books near the end of my first year in college, and quite honestly, the franchise that developed soon after (animated TV series, live action movies, even a touring live show) never really interested me. When Paramount and Nickelodeon rebooted the franchise in 2014 with Teenage Mutant Ninja Turtles, produced by Michael Bay’s Platinum Dunes production company, it didn’t raise even a blip on my radar, and did not see the first film until the day after the sequel arrived on 4K UHD from Paramount. I found the first film to be uninteresting, a harmless entertainment for adolescents with short attention spans who don’t need a lot of plot to keep their attention. Teenage Mutant Ninja Turtles: Out of the Shadows is almost the other side of the coin, a film with almost too much plot, tries to be a heartwarming story about four brothers dealing with rivalry and maturing into young adults, but also crams way too much visual information on the screen at any given time. The visual effects by ILM are very good, particularly the Turtles themselves who were created through the aid of performance capture. Megan Fox and Stephen Amell are very comfortable in their roles as the human protagonists, but Will Arnett seems out of place (even more so than he did in the previous film). And Tyler Perry nearly steals every scene he is in, appearing almost animated. Out of the Shadows as a whole isn’t a very good movie, but it’s not a completely horrible one, either.

Presumably upscaled from the 2K digital intermediate (per IMDB), the UHD version in 2160p with HDR is a subtle improvement over its (included) 1080p Blu-ray counterpart. Colors are slightly more natural (at least the human actors and their natural surroundings) and robust. Contrast is also improved with deeper blacks, particularly during scenes that take place in the sewers and the Turtles’ lair. The facial expressions on the four brothers are more textured, too, while appearing much smoother on the Blu-ray. If your trying to decide between 3D or 4K, it’s more likely a coin flip (not having seen the 3D version), considering the $3 premium for 4K. If you’re on the fence between 2D Blu-ray or 4K, it really comes down to how much of a fan you are of the film, or are you buying it strictly for the kids?

Both the 4K UHD and 1080p Blu-ray contain the same Dolby Atmos mix with a Dolby TrueHD 7.1 core. Playback in a 5.1 configuration with front height speakers in Pro-Logic IIz mode enabled, this is a very active track that will show off your sound system quite nicely. Dialogue is consistently clear and never drowned out by the other channels. Panning effects are effortless and seamless, and even in IIz there is a sense of overhead sounds. LFE is strong but not overpowering. This is a demo-worthy reference quality track.

All of the special features can be found on the 1080p Blu-ray disc.

We Are Family (1080p; 8:15): A look at the actors who not only voice the Ninja Turtles, but also portrayed them through performance capture. The doc also looks at the relationships of the characters.

Whoa! Expanding the Turtleverse (1080p; 14:19): A look at the returning characters and the new ones introduced in this story.

Did You Catch That? Turtle Eggs! (1080p; 3:02): Hints about many of the easter eggs that one might find if you look carefully while watching the film.

An improvement over the first film in the series, Teenage Mutant Ninja Turtles: Out of the Shadows sports a very good upscaled image providing subtle improvement over its blu-ray counterpart, a demo-worthy Dolby Atmos soundtrack, and special features that really don’t add that much value to the set.

If it's of any help with the 3D or 4K “coin toss”, this from the Prime Focus website:

“Corey is always fun to work with, and he really encouraged us to push the 3D in fun ways for this film,” said James Rees, Stereo Supervisor, Prime Focus World. “We played the show very deep but not very positive – ie. not pushed too far back beyond the screen plane. This meant that we could really have fun with things flying out of the screen – its like being on a ride!”

Under Corey’s direction characters jump out of the screen, explosions and flying debris are brought super-negative and knives and throwing stars come whistling out over the audiences’ heads. He also briefed the team to ensure that the depth and volume in the CG characters matched the depth of the characters in the previous Ninja Turtles film.

“Corey referenced the first movie (which we also worked on) in terms of the treatment of the characters,” continued James. “We were really able to amp up the depth in the characters on the first film because we had the z-depths from VFX house ILM, so the turtles had crazy amounts of volume which looked great on screen. We did that again for this one, pushing it even further, and then worked hard on the sculpting of the human characters to ensure it all worked together. Lots of volume, high detail – we really let the audience know that they are watching a 3D movie!”

Access to ILM’s comps and elements packages was an important part of the stereo conversion process – especially with 7 CG characters appearing across 65-70% of the movie. PFW handled the extraction of the elements, including the deep comp elements that ILM had created. The Prime Focus team also augmented a number of key scenes with additional VFX elements to increase the audiences’ sense of immersion.

“One of the stand-out scenes for me was Raf and Leo’s disagreement in their sewer lair,” offered James. “It was a practical set and we were able to create a ton of detail in the environment which looks really cool in stereo, stretching away well beyond the screen. We also augmented the whole scene with suspended dust particles – almost like a mist – that fills the space. As they swing their weapons the dust moves with the characters movement, which looks fantastic. We augmented a number of scenes throughout the movie, including the truck chase near the start for which we added debris and sparks and smoke, and the scene where they are floating down the Amazon, for which we added extra splashes and water"
Reactions: Ashly Yeo
You must log in or register to reply here.
Share:
Facebook Twitter Reddit Pinterest Tumblr WhatsApp Email Link 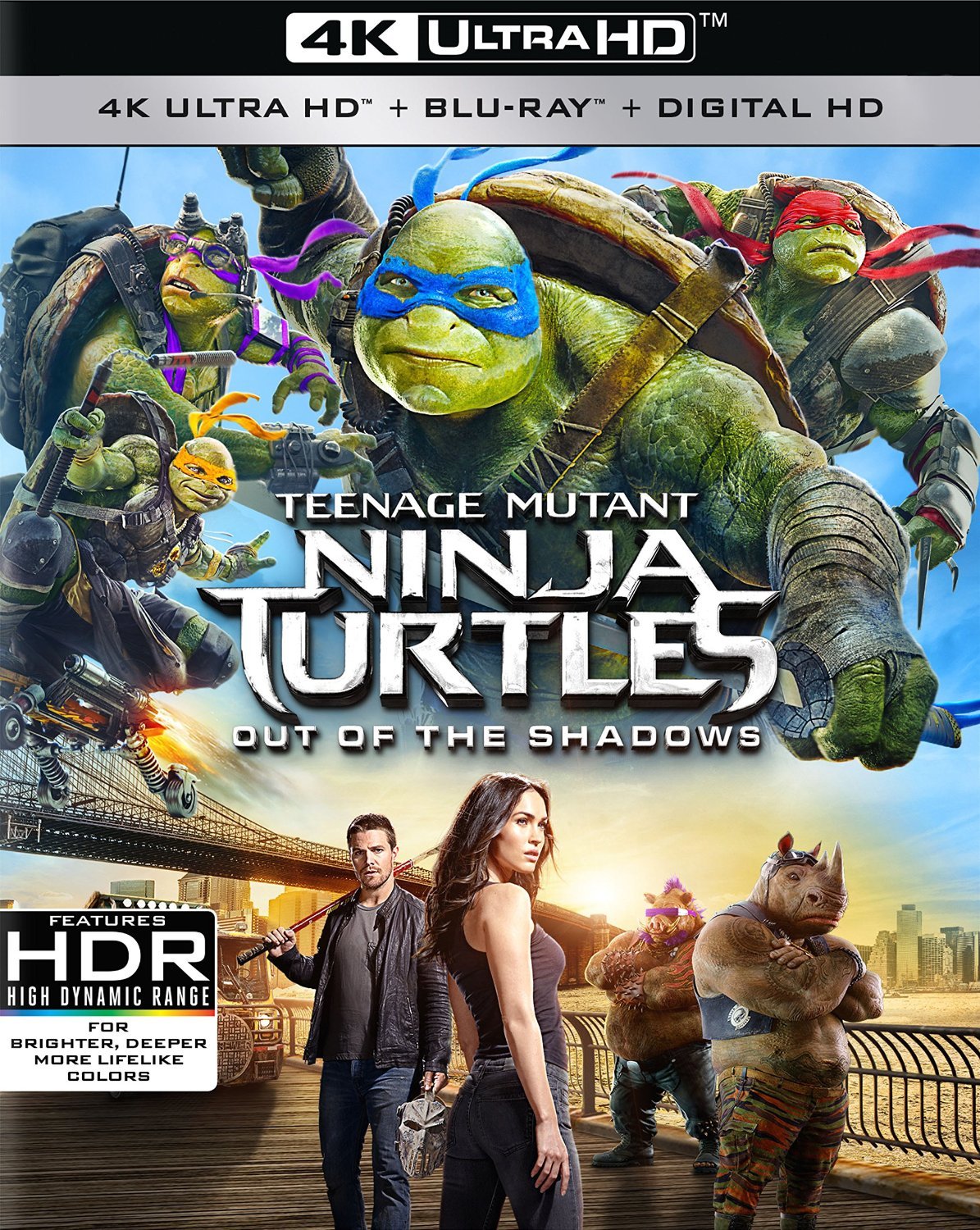