Posted on August 17, 2016 by Matt Hough
The classsic "kitchen sink" drama of the early 1960s gets a beautiful high definition release. 4.5 Stars

A somber, poignant drama of ordinary lives playing out through an extraordinary film, Tony Richardson’s A Taste of Honey offers a raft of accomplished performances and a rare first look at modern British cinema taking a shift into a new direction.

Writer-producer-director Tony Richardson was at the forefront of the British New Wave of cinema artists in the early-to-mid 1960s, and his A Taste of Honey was one of the films that put him there. Telling a bittersweet story of working class lives, a “kitchen sink” drama set in Manchester, A Taste of Honey features characters and relationships that folks didn’t much see in films of the era (and even in today’s more open and relaxed climate, similar encounters are rarer than one might hope), and with Richardson’s innovative style and some smashing central performances, the movie not only reflects its own era but comments on attitudes still going on today.

Mom Helen (Dora Bryan) and teenaged daughter Jo (Rita Tushingham) have a mutually combative relationship: the mother is a natural tart who drifts from man to man and on meeting her latest catch Peter Smith (Robert Stephens) is resentful that she has a daughter at home who could interfere with her scoring her next husband while the daughter resents her mother’s lack of attention and affection and begins to seek it elsewhere. She meets a black sailor Jimmy (Paul Danquah) who shows her the affection she craves but who leaves her pregnant when he must ship out. A local lad Geoffrey Ingham (Murray Melvin) has been kicked out of his flat for bringing a man home and is taken in by Jo. He becomes a mother hen for her: cooking, cleaning, decorating her shabby studio apartment, making baby clothes, and eventually even offering to marry Jo and be the baby’s father if only she’ll agree to such an unusual living arrangement.

Director Tony Richardson has taken the stage play by Shelagh Delaney and expanded it beautifully for the screen (they share screenplay credit though one suspects all of the nonverbal aspects of the script are his along with some new ideas incorporated into the original play including a slightly different ending), not just opening it out by staging dialogue scenes in places other than the play’s one room flat set but by making the movie version truly a cinematic experience with lots of fascinating visuals whether it be Helen’s joyous nightlife in local pubs, dance halls, and street fairs or Jo and Geoffrey’s wandering the streets and byways of Manchester. A night at the carnival is wonderfully staged and shot in montage, and their traversing around the canals, underpasses, and streets of the area really gives the viewer a taste of the terrain of that time. Though the interracial relationship shared by Jo and Jimmy and a homosexual character added to the mix were all pretty revolutionary at the time (the film was banned in several countries), they’re handled in very matter-of-fact style in the film, their uniqueness certainly acknowledged but not dwelt on as the film has far more important things on its mind: the tiny tastes of honey that the needful, deserving Jo gets to sample occasionally before one event after another manages to rob them from her.

Dora Bryan gets top billing in the movie, and while her Helen is decidedly a supporting character, director Tony Richardson makes sure that her moments in camera range aren’t wasted. She gets a jaunty music hall style song with “Because He Loves Me” which she warbles in her cups and gets to cut a rug with the more than adequate Robert Stephens and spit out her dialogue with the practiced gusto of a woman who’s determined to live life on her own terms. This was Rita Tushingham’s introduction to films, and her work won her Best Actress at Cannes. It’s a blazingly honest and in-your-face performance, not bothered with camera angles, hair styles, or makeup to make her broad features more cosmetic for movie audiences, but just as she waits for her “tastes of honey,” so, too, does the audience to revel in the few moments when her face explodes with a joyous radiance missing through so much of this glum tale. Murray Melvin took the Best Actor prize at Cannes. He had originated the role on the stage, but there’s nothing overly mannered or rehearsed in his performance as he shows us the many colors of Geoffrey Ingham who learns that love isn’t as much about a physical act as it is about the caring for one person more than yourself. In his few minutes of screen time, Paul Danquah as Jimmy is also quite effective.

The film is presented in the theatrical aspect ratio of 1.66:1 and is rendered in 1080p resolution using the AVC codec. This new 4K transfer taken from the camera negative is a thing of beauty. Shot on many different film stocks (detailed in one of the disc’s valuable bonus features), sharpness is more pleasing than razor-edged, but there is still much detail to be found in hair and facial features. The grayscale is very impressive with rich black levels and clean, crisp whites. Contrast has been expertly applied throughout. Clean-up has been immaculate (just compare it to clips from the film in some of the bonus material to see the vast difference from the old transfer to this new one) with a complete absence of age-related dust, dirt, and scratches. The movie has been divided into 17 chapters.

The PCM 1.0 (1.1 Mbps) sound mix sounds a bit anemic especially in the early going. With much of the film post-synched, there is that somewhat hollow sound to the dialogue throughout though it’s mixed with surety with John Addison’s overly larkish score and the occasional atmospheric effects. Engineers have been very expert, however, in removing any telltale traces of hiss, crackle, hum, or flutter from the soundtrack.

Tony Richardson Interview (15:02, HD): an audio interview with the writer-director conducted by critic Gideon Bachmann while the film was premiering at Cannes. He discusses his stage directorial career and his preference for film work and excitement about his upcoming film in preparation, Tom Jones.

Rita Tushingham Interview (18:17, HD): a 2016 interview in which the actress recalls how she got the role in the film and her memories of working on it and subsequent work.

Murray Melvin Interview (18:38, HD): a 2016 interview in which the actor discusses his job as a tea maker at the Royale Theatre in 1958 when the play was in its early stages and being offered the role by director Joan Littlewood. He also shares memories of doing the show and his adapting his performance for films two years later.

Walter Lassally Interview (19:51, HD): the film’s Oscar-winning cinematographer discusses the various film stocks used in the movie as he works his way through various sequences of the movie.

Remaking British Theater (21:30, HD): theater historical curator Kate Dorney discusses the origins of the stage version of A Taste of Honey and offers biographical information on Joan Littlewood, the theater impresario who encouraged a company of actors, writers, and technicians to do groundbreaking work in British theater.

Close-Up (15:17, HD): a 1960 episode of the series that features an interview with playwright Shelagh Delaney.

Folded Pamphlet: contains some black and white stills, the cast and crew list, information on the film’s transfer, and a think piece on the movie and its director’s life and career by film professor Colin MacCabe.

A somber, poignant drama of ordinary lives playing out through an extraordinary film, Tony Richardson’s A Taste of Honey offers a raft of accomplished performances and a rare look at modern British cinema taking a shift into a new direction. The Criterion Blu-ray release of this classic is beautifully presented with wonderful video quality and a fantastic sampling of really interesting bonus material. Highly recommended! 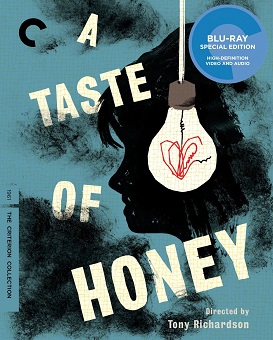