Forum List What's new Dark Style Change width
Log in Register
What's new Search
Menu
Log in
Register
Navigation
Install the app
More options
Dark Style
Close Menu
Posted on October 24, 2018 by Todd Erwin
You are using an out of date browser. It may not display this or other websites correctly.
You should upgrade or use an alternative browser.
Not for everyone 3 Stars

Tales from the Hood 2 arrives as a direct to video sequel, 23 years after its predecessor.

Horror anthologies are a dime a dozen, especially in the direct-to-video arena these days, and are often uneven, with some stories better than others. Executive producer Spike Lee and writer/directors Rusty Cundieff and Darin Scott have resurrected their 1995 anthology movie with the direct-to-video sequel Tales from the Hood 2, nearly 23 years since the original’s theatrical release. The film feels like a failed pilot for a pay channel on cable (HBO, Showtime) or streaming service (Netflix, Hulu), from its very cheap production design, laughable make-up and CG effects, and its preposterous and predictable wrap-around story where Portifoy Simms (scenery-chewing Keith David replacing Clarence Williams III) has been hired to tell stories that are stored in the memory banks of a robotic policeman as part of its training before it is unveiled to the public by weapons and prison contractor Dumas Beach (Bill Martin Williams), a misogynistic and bigoted creep. The stories themselves aren’t much better. The first one involves a young blonde woman, Audrey (Alexandria DeBerry) who stops at a roadside museum of racist memorabilia with her friend Zoe (Jasmine Akakpo), sees a golliwag doll that is vital for her collection, and the two return later that night with her brother Phillip (Andy Cohen) to steal it. They end up getting caught, and what transpires is so bizarre I wasn’t sure if it was meant to be funny or repulsive (or both?). The second story has a group of gangsters who kidnap John Lloyd (Bryan Batt), a fake TV psychic, to find out where $5 million dollars was stashed by Cliff (Creighton Thomas) before he was accidentally killed during their interrogation. Instead, their victims get their revenge by channeling through John. The third has two male sex predators trying to rufy two girls they met on Tinder in order to make a sex tape, except the two girls are vampires. The final segment deals with racial and political tensions in 1960s Mississippi, as a young black Republican is confronted with the ghosts of hate crime victims. This is probably the strongest story here, and possibly could have made an interesting feature.

Tales from the Hood 2 wears its political and racial messages on its sleeve, perhaps laying it all on too thick. At least for this reviewer’s tastes.

Universal brings Tales from the Hood 2 to Blu-ray in a clean AVC-encoded 1080p transfer in the film’s original 1.78:1 aspect ratio. From an aesthetics and artistic standpoint, I may be too generous in my 5-star review here. There are no noticeable compression artifacts, detail is very strong (you can clearly see the raised veins of red in Simms coat, for example), colors are quite vivid without banding or bleeding (no pun intended), and contrast is excellent with deep blacks that don’t crush. But the cinematography and lighting is often too well-lit, with nighttime scenes appearing as if they were lit with Musco stadium lights, and the wrap-around story having almost blinding whites. It is an odd artistic choice for a film of this sort.

The DTS-HD Master Audio 5.1 soundtrack is a fairly by-the-numbers made-for-video horror track. Dialogue is clear and understandable, directed mostly to the center channel. Music and effects are spread across the remaining channels, with some discrete placements of sounds where needed. LFE is good, not great, helping to enhance to soundtrack’s lower frequencies.

Absolutely no special features have been included, other than DVD and digital copies.

Tales from the Hood 2 is obviously not for everyone. Presentation, though, is very solid. For the curious, I’d recommend either renting or streaming it on Netflix (yes, it is already available). 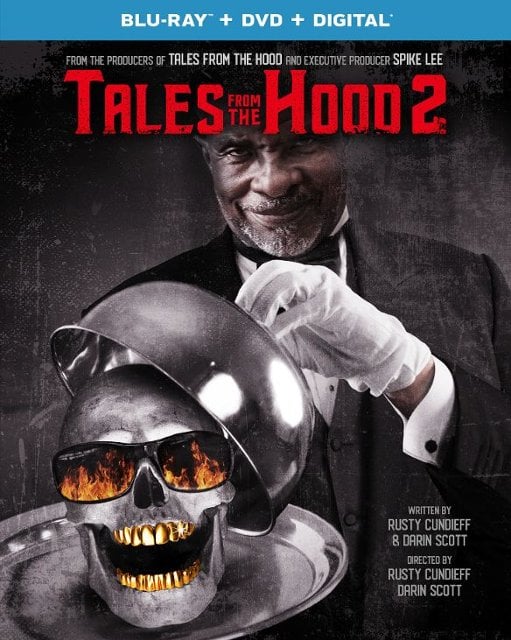