Originally titled Bastille Day, James Watkins’ The Take is a small gem of an action picture.

Originally titled Bastille Day, James Watkins’ The Take is a small gem of an action picture. Fast paced and suspenseful without the bloat and extended set pieces of a Bond movie, The Take earns its cred with its constant surprises and twists and a sense that one never knows where it’s going. Sure, it’s borrowed some of its plot ideas from other high-toned action films, but it’s an exciting action crime drama all on its own.

Master pickpocket Michael Mason (Richard Madden) makes the mistake of purse-snatching a bag containing a bomb which was meant to detonate in an unattended area but instead gets dumped in a street bin where four people get killed. The bomb was the first in what was to be a series of attacks in Paris during Bastille Day to undermine governmental authority and the police, and Mason has stumbled into the midst of the plan, now making himself a hunted fugitive by the Paris officials and by the American CIA since he is an American. Agent Sean Briar (Idris Elba) is dispatched to round up the sneak thief, but their cat and mouse encounters uncover a much different plot being hatched inside the French Defense Ministry involving its director Victor Gamieux (José Garcia) and the head of the RAPID division of the police department Rafi Bertrand (Thierry Godard).

Director James Watkins and his co-writer Andrew Baldwin have fashioned a lean and mean script that, while admittedly borrowing narrative and suspense elements from Die Hard and the Bourne movies, keeps things tight and moving quickly, saving plot twists and surprise reveals until they’re most effective. Yes, there are the expected clichés of the genre: Elba’s Agent Sean Briar sometimes goes rogue when he can’t get his bull-headed superior’s authority to proceed (why can’t these surveillance directors ever trust their field agents who are right in the mix of the action and have a better handle on how these complex pieces of the puzzle fit together?), and planned movements often don’t go off on schedule and require quite a bit of improvising on the spot. But director Watkins does a superb job with some of the film’s most breathless sequences: a rooftop cat and mouse chase over the sloping, rickety roofs of Paris is very exhilarating (in fact, it’s actually done in two stages, each equally memorable), a bar surveillance mission with the pickpocket winds up in a well-choreographed free-for-all, and a slugfest inside a police van gets maximum action out of a minimal space. A climactic assault on a bank is also excellently staged and shot with plenty of surprises along the way.

There has been great support for Idris Elba as the next James Bond, and if he is truly under consideration, The Take should make for an admirable audition for the part. Though affecting an excellent American accent here, Elba handles the action scenes with guts and bravado, not always coming out on top in his various skirmishes but always up for a fight and with a fine sense of grim humor in the midst of the film’s chaos. Richard Madden likewise disguises his native brogue with his own good American accent as an immigrant street thief swept up in events far beyond his ability to handle them. His puppyish demeanor after being caught and his naiveté in the face of overwhelming international events make him a con artist that an audience can easily root for. Charlotte Le Bon plays an important role as Zoe, originally intended to drop off the bomb and later becoming a liability to the terrorists when she’s picked up by the CIA. Kelly Reilly, another Brit hiding behind an American accent, plays the CIA director who won’t believe what her field agent is telling her, and José Garcia is her French equivalent who’s following the Bastille Day riots with a particular agenda in mind. Thierry Godard and Vincent Londez are two of the bombers with closer ties to the government than we’re led to suspect at the outset of the movie.

This is another first-rate transfer from Universal with the 2.40:1 theatrical aspect ratio faithfully rendered in a 1080p transfer using the AVC codec. There are plenty of details to see in facial features, hair, and furnishings due to the superb clarity of the high definition image, and color is spot-on throughout the presentation. Contrast is likewise strong, and shadow detail is impressive in those few moments in shady interiors where light is quite limited. Since the movie takes place in Paris, there is a fair amount of French spoken, and the white subtitles are very easy to read. The movie has been divided into 20 chapters.

The DTS-HD Master Audio 7.1 sound mix is outstanding. Dialogue has been well recorded and has been placed in the center channel. Atmospheric effects including lots of weapons firing, explosions, and racing cars through city streets get excellent split surround treatments with occasional impressive panning across and through the soundstage. The Alex Heffes background score does its job without drawing attention to itself.

Making The Take (2:09, HD): stars Idris Elba and Richard Madden (in their natural accents) describe their characters and convey the pleasure they had working with one another.

Promo Trailers (HD): In a Valley of Violence, Nocturnal Animals, Loving, Desierto, Bleed for This, Priceless, and Snowden.

The Take offers a fast and furious action drama with plenty of thrills, lots of surprises, and surprisingly little bloat. The outstanding video and audio encode on this Blu-ray release should only entice action fans to seek this one out. 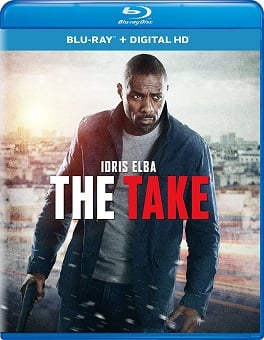