Tag was something of a surprise, a ridiculous premise that claims to be based on a true story, and for the most part, pays off in some big laughs.

Whenever I see the term Based on a True Story in the promotional materials for a movie, I often wonder if they really mean Inspired. All too often, it is that latter term that should have been used, mostly because the creative team behind the movie took the concept of that real occurrence and ran with it in their own way, taking a lot of license with the original story. Tag (not to be confused with the 2015 Japanese horror film of the same name) falls into that latter category, using an article by Russell Adams that first appeared in the Wall Street Journal in 2013 about a group of men that play the childhood game for one month each year as a concept that could easily be mined for laughs. Writers Rob McKittrick (Waiting) and Mark Steilen (episodes of Shameless) run with that concept to create what quickly becomes a slapstick live action cartoon, taking an unexpected shift in tone during the last act.

Each year, during the month of May, Hogan Malloy (Ed Helms), Bob Callahan (Jon Hamm), Randy Cilliano (Jake Johnson), Kevin Sable (Hannibal Buress), and Jerry Pierce (Jeremy Renner) play a game of Tag, with the last one tagged at the end of the month having to pick up the game as “It” the following year. As this year’s game begins, Hogan sets his eyes on Bob, who is the CEO of an insurance company and is being interviewed by Rebecca Crosby (Annabelle Wallis), a reporter for the Wall Street Journal. Intrigued by the idea of five grown men reuniting once a year to play a game they’ve been playing together for over 23 years, Rebecca joins Hogan and Bob on their trip back to their hometown of Spokane, Washington to cover the story. They quickly recruit Randy, the stoner of the group, with some assistance from Hogan’s wife, Anna (Isla Fisher), and then disrupt Kevin’s session with his therapist. Their plan, take down Jerry once and for all before he retires from the game after his wedding on the 31st. Jerry has never been tagged in the history of the game, partially due to his elite athleticism and quick logic (as an homage to Guy Ritchie’s Sherlock Holmes films). The film features some hilarious set pieces filled with slapstick humor and double-crosses, and its talented cast works very well as an ensemble. I wasn’t expecting to like Tag based almost solely on its premise, but it was a welcome surprise.

Despite being a modest box office hit for Warner Bros., Tag receives, at best, a Blu-ray/DVD combo release on physical media (the movie is available in 4K UHD on streaming platforms Vudu, FandangoNow, Google Play Movies, and iTunes). The Blu-ray looks incredible, replicating the film’s 2.39:1 aspect ratio, so it’s hard to see where 4K UHD could improve upon. Colors are vibrant and realistic, with no visible appearance of banding or bleeding. Detail is excellent, particularly in fabric textures and facial features. Contrast is also exceptional, with deep blacks and bright whites, again with no noticeable crushing or clipping.

The DTS-HD Master Audio 5.1 track is your fairly standard comedy mix, front-heavy with dialogue with some occasional use of surrounds during some of the tag-chase sequences.

Meet the Real Tag Brothers (1080p; 5:03): Interviews and footage of the guys that the Wall Street Journal article was based on that inspired the movie.

Deleted Scenes (1080p; 6:20): Eight very brief scenes, only separated by chapter stops, that don’t really add anything to the movie.

DVD Copy: The movie in 480p and Dolby Digital 5.1 audio, plus the Special Feature Meet the Real Tag Brothers.

Digital Copy: An insert contains a code to redeem a HD digital copy of the movie on Movies Anywhere (or UltraViolet).

Tag was a bit of a surprise for me, a film I wasn’t exactly sure I’d enjoy, and walked away pleasantly surprised. Warner’s presentation is excellent. 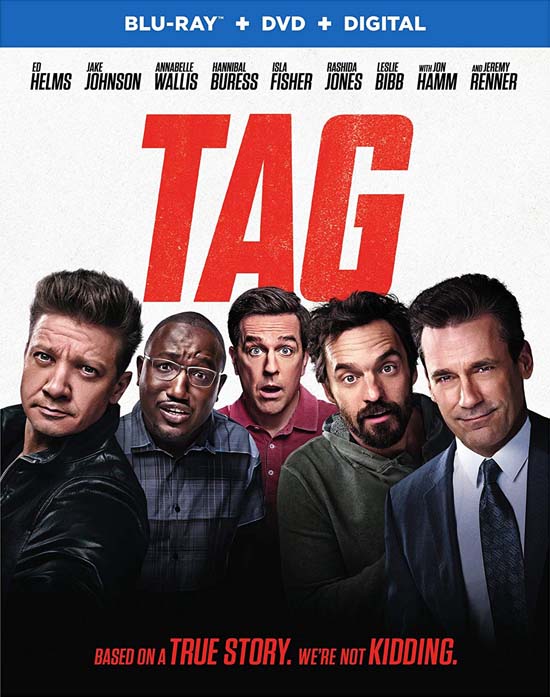