Sword of Sherwood Forest is an entertaining adventure film which is suitable for the entire family. It has arrived on Blu-ray with an excellent transfer that is typical of the quality we have come to expect from Twilight Time and Sony.

Richard Greene was a handsome English actor who was signed to a Hollywood contract by Fox in 1938. He immediately made a strong impression with appearances in such films as John Ford’s Four Men and a Prayer, Stanley and Livingstone, and The Hound of the Baskervilles. Shortly after World War II broke out he returned to England to join the war effort, eventually becoming a captain in the Royal Armored Corps of the Twenty-Seventh Lancers. He returned to the United States in 1946 and went back to Fox, but in spite of a fine performance in Forever Amber his career did not take off as he had hoped. However, his fortunes took a significant turn for the better in 1955 when he was offered the title role in a new television series to be filmed in England, The Adventures of Robin Hood.

American audiences were very familiar with the legend of Robin Hood. There was the 1938 Warner Brothers film The Adventures of Robin Hood which starred Errol Flynn, and the less well known but popular Disney film The Story of Robin Hood of His Merrie Men (1952) in which Richard Todd played the title role. Greene’s television series proved to be a big hit, lasting for four seasons and 143 episodes. Its success prompted Columbia Pictures and Hammer Films to produce Sword of Sherwood Forest, which is now available on Blu-ray from Twilight Time.  Greene, who had become wealthy thanks to the television series, co-produced the film and it was directed by prolific Hammer director Terence Fisher. Greene and Fisher knew each other well because Fisher had directed eleven episodes of the television show.

As Sword of Sherwood Forest begins Robin Hood (Greene) is already established as the bandit of Sherwood Forest who robs from the rich and gives to the poor. The filmmakers apparently felt that the target audience was sufficiently knowledgeable about Robin’s back story, meaning that there was no need to rehash it. King Richard is away at a Crusade and Robin’s arch enemy, the Sheriff of Nottingham (Peter Cushing), is up to no good. The Lord of Bawtry has been killed in battle, and the Sheriff has conspired with a nobleman, the Earl of Newark (Richard Pasco), to confiscate Bawtry’s estate, an action that would displace the townspeople.

In this telling Robin meets Maid Marian (Sarah Branch) for the first time. She initially wants nothing to do with him, but eventually she becomes aware of the Sheriff’s treachery and her attitude changes. When Robin learns that something is amiss in Bawtry he sets out to investigate, but while stopping to visit with Friar Tuck (Niall McGinnis) there is an unexpected appearance by the Earl of Newark and his nasty associate, Lord Melton (Oliver Reed). The Earl does not recognize Robin, but after observing the bandit’s prowess with bow and arrow he decides that Robin could be of use to him in a mysterious plot that he has hatched. Friar Tuck then goes to Bawtry in Robin’s stead, and his journey is punctuated by humorous efforts to get his recalcitrant donkey to carry him.

Richard Greene was in his forties when Sword of Sherwood Forest was filmed, but he exuded charm and was still sufficiently agile to convincingly wield his bow and arrow and engage in swordplay. Peter Cushing and Richard Pasco turn in fine performances as the sinister villains. Oliver Reed appears uncredited as the malevolent Lord Melton, although some sources say that his lispy dialogue was dubbed by another actor. Sarah Branch is an attractive Maid Marian. Her chemistry with Richard Greene does not exactly sizzle, but as Marian she is strong enough to openly stand up to the Sheriff. Jack Gwillim appears as the Archbishop of Canterbury, and Nigel Green is imposing as Little John. Niall McGinnis provides comic relief as the exasperated and ever-hungry Friar Tuck. Terence Fisher keeps the action moving along and the film wraps up in an economic 80 minutes.

Sword of Sherwood Forest is a lesser film than both the Errol Flynn version and the Disney version, but it is entertaining and handsomely mounted. Hollywood has been making Robin Hood films for more than a century, with yet another one released just last month (albeit with a paltry 16% fresh rating on Rotten Tomatoes). Robin also has been memorialized in books, comic books and comic strips. It seems that the public never grows tired of Robin, and his fans are sure to enjoy this Twilight Time release.

Sword of Sherwood Forest was filmed In Technicolor on location in Ireland. The 2.35:1 Megascope production is properly framed. As we have come to expect from Twilight Time and Sony, the transfer is immaculate, with vibrant colors and magnificent scenery. The dissolves are quite grainy, but that is how the film has always looked. The cinematography is by Ken Hodges, who also filmed many episodes of the television series.

The DTS HD-MA mono soundtrack is as good as it could be, with clear dialogue throughout. The music score is by Welsh composer Alun Hoddinott, who did very little film and television work during his career. Denis Lotis sings a couple of tunes as the minstrel Alan-a-Dale.

The extras on this Blu-ray release include the original theatrical trailer and an isolated music and effects track.

Also included is an illustrated booklet with an appreciative essay by Julie Kirgo.

Sword of Sherwood Forest is an entertaining adventure film which is suitable for the entire family. It has arrived on Blu-ray with an excellent transfer that is typical of the quality we have come to expect from Twilight Time and Sony. Readers who are interested in purchasing it can go to the Twilight Time website or the Screen Archives website to order it. As of this writing it is on sale for $24.95 at both websites. 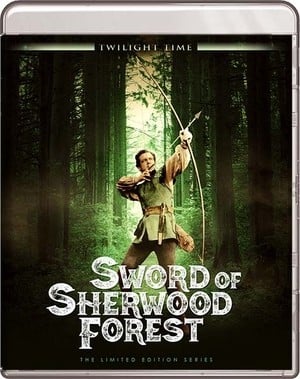