An innocent enough, but undeniably naïve fantasy about American politics in an election season. Despite the considerable talent to be found in front of and behind the camera, Swing Vote misses the target. A comedy that relies on a heartwarming skewering of the disinterested, disengaged and disenchanted everyman voter, and a message of recognizing the importance of taking part (in life as much as the political process), sadly appears to have no place in the politics of today. Still, despite the fundamental flaw, Swing Vote remains likeable.

Released back in 2008, Swing Vote was already an ill-conceived project whose timing could not have been worse. On paper, it likely appeared as a good vehicle for its lead, Costner, to skewer the nature of American politics while still holding the oft-neglected power of the American voter both to task and in high regard. But that is exactly where the film did not fit with the way the 2008 presidential election shaped up, and certainly where electoral politics has found itself since. The game has changed, and not just because the notion of the old, white male leading a political party whose difference with the opposition was just a variance in the grey of the hair color and tent pole philosophical differences on lightning rod issues. I mean that not as an indictment on the American political system, per se, but the Hollywood view of the American Political system as a medium for comedy.

Kevin Costner stars as Bud Johnson, a slovenly single father who’s wiser than her years daughter, Molly, appears to be raising the both of them. Bud is recently unemployed and, aggravatingly, uninterested in being responsible. The national election is in full swing, though he could care less, but through a turn of events he becomes the focus of an entire nation’s attention. This is because, through the magic of cinema, an entire election rests upon a single vote – his. He is soon courted by both political camps to sway him, persuade him to cast his vote in support of their candidate and thus securing a victory for that man and party.

Swing Vote is great ‘what if’ material and it isn’t a bad film at all. It simply holds little relevance in today’s political climate (though I’ll admit, that is a debatable point) and includes many ingredients that don’t live up to the true potential of the ‘what if’ in play. But, in a somewhat unexpected and surprising turn of events, there is a spark of charm about this film. Perhaps it is the air of potential about the proceeding; the want to like the characters or enjoy the absurdity of the circumstances. It simply doesn’t rise up enough to balance out the issues at hand, but floats just enough ballast to be close to good and is thus at least worth a look.

The aged and interesting cast includes some quality comedic talent, including Kelsey Grammar as the incumbent presidential candidate Andrew Boone, Nathan Lane as Art Crumb and George Lopez as John Sweeney. Stanley Tucci also stars as Martin Fox with Paula Patton as Kate Madison and Dennis Hopper as the opposing candidate to Boone, Donald Greenleaf (with Star Trek: Deep Space Nine’s lovely Nana Visitor as his wife). The cast plays candidates, advisors and media types that we have all seen in some way before. But this is a film with a father daughter core around which a playful political yarn has been spun, and young Madeline Carroll makes her debut as the self-supporting Molly to Costner’s immature Bud. Molly and Bud have a good chemistry, which sells the central familial theme, but the degree that Bud is such a loser and Molly is so world-wise, stretches credulity.

Swing Vote is uneven entertainment. Too many distinct cinematic tropes vying for our attention. The sense of hope versus the ignoble selfishness of politics and the prevalent and predictable tenets of candidates and campaigns; The chance to live up to expectations against the inward focus of a listless self and the fight to come to, and through that. This juxtaposed with sly comedy, silliness of circumstance, earnest attempts at drama and some unmistakable teary-eyed hokum to try and keep our hearts invested. It seeks to poke and prod at the political establishments while slowly unfolding the sincerity of the characters buried beneath the blowhards and brutal barons of the battle. That’s quite a lot to mix together and expect to come out ahead.

Mill Creek Entertainment presents Swing Vote in its original theatrical aspect ratio of 2.40:1. The opening moments, establishing the rustic setting and the relationship between Bud and Molly show off the best qualities – the sharpness and bright palette – on offer in the film. A distinct improvement over the DVD I reviewed a number of years ago. Greens are deliciously rich, in fact color saturation pops throughout the film creating perhaps a little too heightened sense of the floral warmth of the American heartland. Whites and blues are crisp and clean, and when good, the quality is pleasing. But, much like the film itself, it is a mixed bag of the good and problematic.

Swing Vote comes with just an English Dolby Digital 5.1 surround sound. Audio is heavily focused in the front with only the accessional use of the surrounds. John Debney’s alternately brassy, guitar and solo violin laced score spark to life behind you, but it isn’t often or even pronounced when it does. Bass is light, dialogue crisp and clean, with a little directional sound in the fronts. Adequate but largely unremarkable.

None of the previously available special features (from the DVD and first Blu-ray release from Touchstone Home Entertainment) are included.

Revisiting Swing Vote reminds me of something that I miss – a state of political discourse that may never have existed, but I always wished did. And while I like the film, I wanted to like it more. I wanted it to be prescient enough when it was being made to better capture the potential swing voter that could have been important in that election. I wanted it to understand where America was and better understand the deficiencies and dedication, selfishness and servant souls and blindness and boldness of the two political parties that contend for victory. It finds political balance by peeling back only the most surface of layers; just enough to let you know which party is which. Its heart is in the right place, but in the end, the film wasn’t. 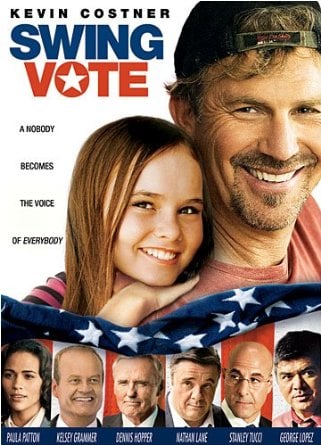