The sixth of the Fred Astaire-Ginger Rogers musical marvels, George Stevens’ Swing Time features some of the most unforgettable songs and dances in the duo’s entire repertoire.

The sixth of the Fred Astaire-Ginger Rogers musical marvels, George Stevens’ Swing Time features some of the most unforgettable songs and dances in the duo’s entire repertoire. The narrative that encompasses them isn’t up to snuff (as was typical of so many of their tandem musicals), but some of the RKO stock supporting company is present to make merry, and there are more than enough diverting melodies and production numbers to offset any impatience that the forgettable romantic plot may generate in the viewer.

Happy-go-lucky, larkish Lucky Garnett (Fred Astaire) pursues dancing and gambling with equal verve. Engaged to the pretty but somewhat cold Margaret Watson (Betty Furness), Lucky gets waylaid to his wedding by the dancing ensemble who supports him, which leads to the ceremony being called off. Margaret’s father (Landers Stevens) decides that Lucky can have a second chance at marrying his daughter if he can make $25,000, so he heads to New York City to seek his fortune with his best friend Pop (Victor Moore) along for the ride. When Lucky meets the beautiful dance teacher Penny Carroll (Ginger Rogers), however, his priorities soon change, and he isn’t nearly as eager to marry Margaret any more. But Penny has her own suitor, orchestra leader Ricardo Romero (Georges Metaxa), who manages to throw enough roadblocks in the way of Penny and Lucky getting to the altar that their romance may be permanently compromised.

Howard Lindsay (of Life with Father fame) and RKO’s own Allan Scott contribute the flimsy narrative which surrounds the movie’s six musical sequences, but Lucky and Penny’s rocky road to romance is notably lacking in grown-up behavior and natural circumstances (three times romantic tiffs separate the two lovebirds, misunderstandings which could be explained away in a few simple exchanges in normal adult communication). Lovers of Astaire and Rogers, however, are used to such quixotic romantic setbacks in their scenarios so that we can get to the good stuff: the song and dance solos and duets on which the team’s reputation is justifiably known, and Swing Time doesn’t disappoint in the least in that regard. Fred’s blackface number “Bojangles of Harlem” provides his trick number for the movie after a rather mediocre female chorus line dances off wherein Fred much more effectively dances with a trio of silhouettes of himself where his perfection of form and line proves to be at its zenith. “A Fine Romance,” one of the two standards the film introduced, is sung in solo moments by first Ginger and then Fred lamenting their lack of ardor amid an evocative snow scene that frames their lighthearted melancholy wonderfully. The Oscar-winning love theme of the movie “The Way You Look Tonight” proves a beautiful counterpoint for any overt lack of emotion between them (and is mixed deftly with the climactic song “Never Gonna Dance” in the movie’s climactic somber ballroom dance directed on rising levels with special grace and showmanship by George Stevens), but it’s the other two big dance duets by the team that mark the film’s true highpoints. “Waltz in Swing Time” and especially “Pick Yourself Up” offer the pair’s unassailable mastery of tapping ballroom terpsichorean expertise, the latter a jaunty, prancing routine where Fred demonstrates to Ginger’s sour employer Gordon (Eric Blore) her teaching proficiency while the high stepping Ginger’s swirling dress provides remarkable complementary accompaniment to the couple’s most engaging joie de vivre.

By their sixth film together, Fred Astaire and Ginger Rogers have an ease and familiarity in their performances that supersede the narrative’s silly romantic trifles between their on-screen personas. Victor Moore’s halting milquetoast Pop may occasionally get bothersome with his empty-headed antics, but in his first movie with Astaire (they had performed together in stage productions), he makes a fine co-conspirator. Helen Broderick as dance instructor Mabel returns to the Astaire-Rogers fold to add her starchy flippancy that is welcome in any situation. Eric Blore who had enlivened Top Hat gets a few laughs as the fussy head of the dance studio where Ginger and Helen work, but he exits from the movie much too early. Georges Metaxa offers a Latin lover persona as Fred’s rival though his lack of charismatic charm or ease before the camera doesn’t make him much of a threat. Betty Furness in the small role of Fred’s original intended is a likewise rather colorless romantic rival for Ginger.

The film’s original theatrical 1.37:1 aspect ratio is faithfully reproduced in this 1080p transfer using the AVC codec. Taken from sources removed from the original camera negative, the movie looks very nice with a very good grayscale and some film grain but does betray on occasion the lack of pristine masters for this release. There can be glimpsed a slight white scratch and a more pronounced black scratch during the running time, and an annoying fluttery hair is present through much of the climactic “Never Gonna Dance” finale. The movie has been divided into 15 chapters.

The uncompressed PCM 1.0 sound mix is true to its era. The mono sound channel offers the movie’s dialogue and lyrics in clear and concise fashion with the Jerome Kern music and the tapping sounds and additional sound effects blended smoothly into a single track. Engineers have done a marvelous job eliminating sound anomalies from the track resulting in a mix that’s virtually free of hiss, hum, crackle, and thumps.

Audio Commentary: film historian John Mueller’s 1986 track for the original laserdisc release is repeated here. He’s not all praise as he mentions the film’s shortcomings while also praising its main strong points: the outstanding score, the memorable dancing and singing, and the mostly first-rate cast. There are gaps in the commentary, however, and he does occasionally describe on-screen events when he runs out of critical commentary.

Ginger Rogers Interviews (21:06, 4:09, HD): a 1980 audio interview covers a fine amount of ground in discussing her career while a 1982 video interview zeros in on Swing Time in particular and her work with director George Stevens for the first time.

In Full Swing (40:56, HD): film historians Gary Giddins, Deborah Winer, and Brian Seibert discuss the film’s dances, songs, and direction in a good video analysis on one of the team’s finest offerings.

George Stevens, Jr. Interview (7:21, HD): 2019 interview with the director’s son who discusses his father’s career and his first work in a musical with this movie.

Fred Astaire Interview (2:04, HD): a 1982 interview with George Stevens, Jr. finds the performer offering memories of working on this movie.

Hermes Pan Interview (5:04, HD): the dance director for the movie offers some memories of working with George Stevens on the picture.

Enclosed Pamphlet: along with information on the audio and video transfer, cast list, and some film stills, the enclosure offers film historian Imogen Sara Smith’s perceptive essay on the movie.

Among the greatest of the Astaire-Rogers dance musicals (with Top Hat and The Gay Divorcee offering the stiffest competition), George Stevens Swing Time makes a welcome debut on Blu-ray from the Criterion Collection. With a fine audio and video transfer and an outstanding array of bonus material, this wonderful release comes with a strong recommendation. 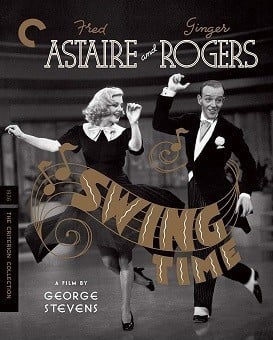