Bob Fosse’s Sweet Charity is an excellent movie adaptation of a hit 1966 Broadway musical which Fosse himself had brought to the stage as director and choreographer.

Bob Fosse’s Sweet Charity is an excellent movie adaptation of a hit 1966 Broadway musical which Fosse himself had brought to the stage as director and choreographer. In 1969 when the film premiered, however, roadshow musicals had run their course. Though 1968’s Funny Girl and Oliver! had been hits, Star! had lost a great deal of money, and this disenchantment with big, bold musicals carried over the following year to the big budgeted but costly failures that were Hello, Dolly!, Paint Your Wagon, Goodbye, Mr. Chips, and Sweet Charity. Things didn’t improve the following year either with both Darling Lili and On a Clear Day You Can See Forever losing money for Paramount. Clearly at that moment in America with unrest among races, generations, and hawks and doves, movie musicals were not what the majority of the public was craving. That doesn’t disparage the very real talent and good old-fashioned showmanship that Fosse imbued into Sweet Charity, a bittersweet song and dance saga of a woman unlucky in love but a bit more sophisticated and hip than its compatriots but no more successful at the turnstiles, sad to say.

Charity Hope Valentine (Shirley MacLaine) always tries to look on the bright side of life, despite working in a rundown dance hall and contending with a seemingly endless run of dishonest, using men. Determined to find love, Charity has a fateful encounter with suave Italian movie star Vittorio Vidal (Ricardo Montalban), but their sweet night together (purely platonic) is all too brief. However, when Charity finds herself stuck in an elevator with the shy, excitable Oscar Lindquist (John McMartin), it turns out that she may have finally met her love match with someone as pure of heart as she is.

Peter Stone’s adaptation of Neil Simon’s Broadway libretto retains almost everything that was funny in the Broadway version but has added some scenes which play up the story’s more bittersweet qualities, and with Shirley MacLaine, the queen of playing bittersweet losers-at-love, as his star, the new sequences really wring the strongest possible emotion out of the story based on Fellini’s Oscar-winning film Nights of Cabiria. Three stage songs were dropped entirely from the score, two others were replaced by new numbers (“My Personal Property” and “It’s a Nice Face,” both Charity solos), and the title song was given a new tune to its original Dorothy Fields lyrics (all the songs were by Cy Coleman), but all of the movie’s best musical moments come from the original songs: Charity’s showstopping prance around the movie star’s apartment “If My Friends Could See Me Now” pretty much repeats Fosse’s Tony-winning Broadway choreography done for his wife, original stage star Gwen Verdon; the “Rich Man’s Frug” (another that follows Fosse’s stage choreography very closely), “Hey, Big Spender,” “Rhythm of Life,” and “I Love to Cry at Weddings” take advantage of the vaster scale which the movies can afford musical numbers, and “I’m a Brass Band” makes full use of many New York City locations for its extended singing and dancing. The film’s most outstanding moment, though, comes when Charity and her two friends Nikki (Chita Rivera) and Helene (Paula Kelly) head to the roof and sing and dance of their hopes for the future in “There’s Gotta Be Something Better Than This,” a number so galvanizing in its rhythms and terpsichore that it sweeps the viewer up in its overwhelming verve. In his first film, Fosse makes use of every possible item in his cinematic toy box (sometimes to irritating effect): dissolves, zooms in and out, panning, slow and reverse motion, freeze frames, negative printing, tinting, and photo and live action montages. And he uses calculated editing cut right to the beat of the music to punctuate moments in song and dance, best illustrated in “Hey, Big Spender” where we explore that line-up of taxi dancers from every conceivable angle.

Shirley MacLaine was really the only viable singing and dancing megastar in Hollywood at the time who could carry the extremes of this triple-threat role (Gwen Verdon on Broadway and Gretchen Wyler in the national tour were both better singer-dancers than MacLaine, but MacLaine was the slightly better actress; if the movie had been made five years later, Liza Minnelli could have done it with more vocal flair), and while her singing is sometimes a little thin, there is no denying that she nails the dancing and acts the heartbreaking moments of the story (especially her employment office interview and her final rejection in the ugliest wedding dress ever conceived) with a memorable flair. John McMartin makes an endearingly nerdy Oscar. As her best friends, Chita Rivera and Paula Kelly are wonderful: blunt and yet loving to their soft-hearted chum; it’s too bad their character number “Baby, Dream Your Dream” was dropped from the song lineup. Ricardo Montalban just oozes charisma as the jilted movie star. Stubby Kaye scores points as the taciturn manager of the dance hall, and Sammy Davis Jr. makes the most of his big musical number “Rhythm of Life.” Mention must be made of the three superb lead dancers for the “Rich Man’s Frug” and other musical sequences: Ann Reinking-lookalike Suzanne Charny, two-time Tony nominee Lee Roy Reams, and Tony-winner Ben Vereen.

The film’s original Panavision theatrical aspect ratio of 2.35:1 is faithfully executed in this 1080p transfer using the AVC codec. The movie looks like it was filmed last week with brilliant color which sometimes bursts from the screen, outstanding contrast, and not a speck of dust or dirt to be seen. Black levels are inky throughout. The movie has been divided into 8 chapters.

The disc offers a choice of DTS-HD Master Audio 5.1 surround sound or DTS-HD Master Audio 2.0 mono. The surround track was used for the purposes of this review. While volume levels may be a tad underwhelming, all the dialogue and song lyrics are easy to hear and understand, and the music and sound effects never intrude into one’s ability to discern what’s being said or sung. It’s true, too, that while the Overture is present on the theatrical releease, there is no Entr’Act or Exit Music present on either disc in the set.

Audio Commentary: attached to the alternate version, film historian Kat Ellinger provides a nattery, chattery commentary on the film that offers some facts on the production and the stars but often segues into long-winded unnecessary discussions of everything from Barbara Bouchet’s career (while completely ignoring the presences of Stubby Kaye, Ben Vereen, Lee Roy Reams, and Suzanne Charny) to Italian neorealism. She also makes errors (saying Charity was the one Tony nominated role Gwen Verdon didn’t convert into a trophy; she didn’t win for Chicago either) and spends too much time describing what’s on the screen.

Edith Head Costume Design (7:29, SD): a publicity featurette, the Oscar-winning designer describes her thoughts for the designs for the movie showing sketches and wardrobe tests and mentioning specifically what she was going for in the disco sequence, the taxi dancer ballroom, the garage sequence, and the rooftop dance.

From Stage to Screen (9:01, SD): director-choreographer Bob Fosse describes his anxiety and delight in directing his first film. Behind-the-scenes shots show him at work rehearing the actors and blocking shots for later shooting.

Bob Fosse’s Sweet Charity may not have been a box-office hit in its day, but looking at it in retrospect, it offers manifold evidence of the emergence of a major cinematic talent. The Kino Blu-ray release may not have all the bells and whistles that fans of the movie were hoping for, but it looks sensational and is a fine package of entertainment. Recommended! 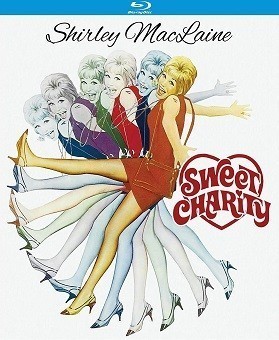