Nearly 20 years before Frank Marshall’s Alive (1993) hit theaters, Rene Cardona’s Survive! tells the story of the passengers of the ill-fated flight of Uruguayan Air Force Flight 571 in 1972. While it would be considered as a disaster film or as an exploitation film, it’s actually a fairly decent and competently made movie chronicling a human disaster and the triumph of the human spirit in the face of desperate odds. Shout Factory has picked up the film for its Blu-ray debut.

In the Fall of 1972, a rugby team from Uruguay, along with friends and family members, boarded a charter plane departing from Montevideo to Santiago, Chile to play a match there. After a brief stopover in Mendoza, the plane encounters turbulence and crashes into the Andes Mountains, killing 17 upon impact. The surviving passengers try to figure out a way to stay alive and contact help so that they can be rescued. But when it becomes clear that help is not coming anytime soon, due to errors in judgment made by the flight crew prior to the crash, and with more succumbing to their injuries, they have to make a difficult decision between starving to death and having to use the bodies of their dead friends, family, and teammates for food in order to survive.

The incident that became known as “The Miracle of the Andes” became an international sensation when the details surrounding the survivors and the reports of cannibalism emerged in the news. Understandably, two books – Survive! in 1973 and Alive: The Story of the Andes Survivors in 1974 – were published in quick succession to capitalize on the major event. The film, based on the former book by Clay Blair Jr. (who also adapted it for the screen), is basically a Cliff’s Notes version of the disaster, chronicling the missteps made by the authorities in the initial search and the plight of the survivors. While it’s remarkable that the movie treats its grim subject matter with the respect that it deserves, it’s also emotionally distant; because we seem to know the fate of several of the passengers, the movie never really allows us to know more about them, let alone build up a sense of feeling towards them, making it the film’s major flaw.

One to the major points that sets this one apart form other exploitation films is that while it’s an ensemble piece, it’s practically devoid of any major names that would be familiar to us – think of it as the antithesis to the star-studded Irwin Allen productions going on around the same time as the movie’s release. The one name that does stand out among the crowd is Hugo Stiglitz (playing the rugby coach and eventual leader of the survivors), who has gone on to international cult status as well as a tribute by filmmaker Quentin Tarantino, who named a character after Stiglitz in his 2009 film Inglourious Basterds. For the most part though, the largely unfamiliar cast actually does a solid job in lending a sense of humanity towards the victims, helping the film to a certain degree.

The transfer for Survive! was taken from a new HD transfer taken from the best surviving elements of the English language version found in the Paramount vaults, as the disclaimer on the Blu-ray makes clear. For the most part, the grain structure is sturdy throughout, with some scenes – particularly ones involving optical effects – showing some fluctuations in the level of grain. Color is consistent, with some cases of speckling and scratches being more noticeable in some scenes than others as well. In short, this is probably the best Survive! will look on home video.

The movie is presented in a DTS-HD MA mono soundtrack, preserving the film’s original soundtrack as released. The dialogue is clear, even in its dubbed form, and Gerald Fried’s somber score is given a strong presentation and fidelity, making this a solid track without much in terms of hissing, popping or crackling. Again, this is probably the best Survive! will sound, considering the elements Shout had to work with. Optional English subtitles are also available.

Audio Commentary by Dave Wilt: Although not listed on the package itself, this commentary delves into the background of the movie, including the cast and crew, the differences between this version and the original 112 minute version, as well as some interesting insights into the Mexican film industry around the time of production. Although a bit disorganized and has a couple pauses too many, it’s still worth a listen for the wealth of information on the film.

Supervivientes de los Andes – the original 112 minute version of the movie: The original Mexican version of Survive! is presented here as a bonus feature, albeit in standard definition and in full frame. Much of the footage that was trimmed by Paramount for is U.S. release contained extended portions of the beginning, the search, and more banter between the survivors.

Theatrical Trailer (2:45): The original trailer for the U.S. release is presented here in solid condition.

Survive! stands out as a gritty and somber antithesis to the splashy big budget disaster movies of the 1970’s. While not as well known as its more famous cousin, Alive, it’s still remarkable for the amount of restraint and respect shown for the subject matter that could’ve easily been exploited for it’s most sensational aspect: the cannibalism. Shout Factory’s new Blu-ray is nicely done and could attract new viewers of the movie who, hopefully, appreciate it for what it is.

I have never seen this movie, but used to have the movie poster hanging in the hallway to my bedroom when I was in high school. Survive and Piranha where the first two posters you saw, then Phantasm, Halloween, Twilight Zone, ET, and Raiders of the Lost Ark.
Reactions: TravisR
You must log in or register to reply here. 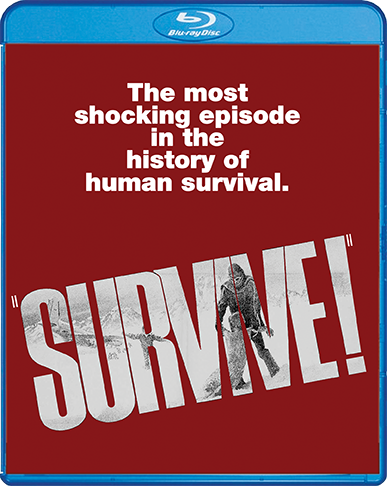