An intriguing alternate take on the Man of Steel representing truth, justice, and the Russian(?) way 4 Stars

What if Kal-El landed in Soviet Russia instead of Kansas after being sent by his parents from doomed Kryton?  This is the basis of Warner Brothers’ latest direct to home video animated feature which is based on the graphic novel limited series Superman: Red Son.

In Superman: Red Son, Superman is raised in Soviet Russia and embraces the ideals of truth, justice, and the Russian way of life.  Joseph Stalin lives longer in this alternate reality, presumably due to the stabilizing influence of a Soviet Superman.  If Soviet Russia has Superman, what effect would this have on America?  Well, Lois Lane is married to Lex Luthor, for one thing.  Another difference is that Luthor creates Bizarro, aka “Superior Man”, as a direct response to the Soviet Superman, and John F. Kennedy is still president of the United States in 1967.  The most profound change is in Superman himself.  When meeting Lois Lane, reporter, Superman comments that the press is the enemy of the people.  Superman: Red Son gives us a story arc in which Superman initially has leanings towards dictatorship before believing that mankind should be given freedom to find its own way.  Decades elapse in the expansive plot line that brings us significant changes to the other super-heroes of the DC Universe.  Batman, Wonder Woman, and the Green Lantern Corps. are much different in this alternate story.

In the 1950s, what is now DC Comics featured countless stories of Superman and Batman that were imaginary stories, even as the captions proclaimed “Not a hoax! Not an imaginary story!”.  Consistent continuity was not the norm, so the events in a story in one month would be contradicted in the following month’s stories.  (Marvel Comics seemingly shunned imaginary stories during its renaissance in the 1960s in favor of continuity, before also going in this direction in the 1970s with its “What If” series.)  Superman: Red Son is an imaginary story in the same vein of its imaginary stories from the 1950s and 1960s, which have since been released as “Elseworlds” titles.

Superman: Red Son is a polished and entertaining adaptation of the graphic novel series, even as it departs in places from the source material.  Screenwriter DeMatteis does a fine job of breaking down the byzantine original story into a comprehensible feature at 85 minutes, even as certain things get lost in the translation.  One would never know from watching the film that the change of Kal-El’s arrival in Soviet Russia, rather than Kansas, is due merely to a delay of several minutes from his original arrival, which changes his landing point due to the rotation of the Earth.  Of course, this is well known if you have read the back of the disc case or the original limited series.  This is the only major weakness in this engaging film, since understanding the film story should not be dependent upon external sources, such as reading the comic book or knowing the definition of Earth-30.

Superman: Red Son appears on 4K UHD and blu-ray in a 1.78:1 screen aspect ratio.  The black line-work and detail of the animation is reproduced with solidity in this HDR transfer on UHD disc. Colors are bright and bold, even if the source material does not attempt to challenge the polychromatic threshold of HDR.

The English DTS-HD 7.1 Master Audio track has limited but discrete directional audio.  The sound mix presents dialogue and effects that are always audible in relation to the soaring score composed by Frederick Wiedmann(Wonder Woman: Bloodlines, Reign of the Supermen).  French and Spanish audio are available in Dolby Digital 5.1.

Special features are located only on the blu-ray disc, not the UHD disc, and include all of the following:

Superman: Cold Red War(16:57):  Featurette with discussion of the real world background in this story of the Cold War.

A Sneak Peek at The Death of Superman(7:05):  Behind the scenes talent preview the DC animated film released originally in 2018.

A Sneak Peek at Gotham By Gaslight(8:29):  Behind the scenes talent preview the DC animated film released originally in 2018.

Trailers(3:42):  Batman:  Hush and The Death and Return of Superman are the featured trailers.

Superman: Red Son is an interesting animated film adaptation of the graphic novel series of the same name.  The video presentation on this UHD disc with Dolby Vision HDR is serviceable and flawless for what it is, since the animation, and the audio mix, do not stretch the boundaries of video and audio perfection.  The special features stand up well as supplements to the feature film.  Superman: Red Son is one of the more interesting Superman animated features to arrive for some time.

I had a real hard time connecting on any level with the characters here. I'm sure it's a "me" problem...I've had the same problem with the last half dozen animated DC movies. I think I need to revisit this movie when I'm not so incredibly tired.
You must log in or register to reply here.
Share:
Facebook Twitter Reddit Pinterest Tumblr WhatsApp Email Link 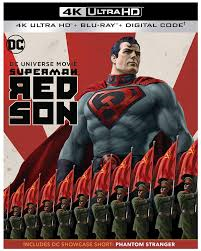