Actor Russell Crowe showed filmgoers versatility early in his career by playing a nasty, vindictive neo-Nazi skinhead in Romper Stomper and following that with the genial, sensitive gay son in Kevin Dowling and Geoff Burton’s The Sum of Us featuring one of the most ingratiating father-son relationships in all of cinema.

Actor Russell Crowe showed filmgoers versatility early in his career by playing a nasty, vindictive neo-Nazi skinhead in Romper Stomper and following that with the genial, sensitive gay son in Kevin Dowling and Geoff Burton’s The Sum of Us. Featuring one of the most ingratiating father-son relationships in all of cinema, The Sum of Us combines comedy and drama in an appealing package with first-rate performances and a fresh take on the adult dating scene both gay and straight.

Father-and-son housemates Harry (Jack Thompson) and Jeff (Russell Crowe) Mitchell are both looking for love, Harry with an attractive though cautious divorcee (Deborah Kennedy) and Jeff with a handsome gardener (John Polson) who still lives at home and, unlike Jeff, is not out to his very conservative parents. Harry is enthusiastic about his son finding love and isn’t the least bothered that his son is into blokes, but at this time in his life he’s especially smitten with Joyce who is easy to be with and seems like she might make an ideal companion. But fate has surprises in store for both of the Mitchell men.

Based on his stage play, the screenplay by David Stevens never quite leaves his stage work behind in fashioning the script for the film with his having both main characters breaking the fourth wall continuously to tell us their thoughts about what’s going on in their minds and how they feel about what’s transpiring with them and the other characters (it becomes particularly distracting in the third act with Harry after fate has dealt him a particularly cruel blow). Their shared thoughts are sometimes funny and often endearing (the date between Jeff and Greg kibitzed by Harry is one of the film’s highlights), but it still seems very stagy and not particularly well crafted for a cinematic adaptation. In fact, the direction by Kevin Dowling and Geoff Burton doesn’t always make great use of cinematic techniques either though the courtship of Harry and Joyce is presented in an engaging montage with “She-Boom” playing on the soundtrack, and all of the flashbacks dealing with Jeff’s lesbian grandmother (Mitch Mathews) and her forty-year love affair with Mary (Julie Herbert) are filmed in black and white and filmed silently letting the images do the work, both of these perhaps ranking as the most adept cinematic sequences in the picture. Much of the rest is dialogue-driven and filmed in single set segments (kitchen, living room, back yard) which underline the property’s stage origins even though the actors are wonderfully warm and appealing and the movie has us rooting for their happiness continually.

Jack Thompson gets top billing and has the meatier part of the two leads with his terrifically upbeat view of life and his wonderfully supportive love for his son. Even when the third act tragedy occurs, he makes excellent use of body language and facial expression to keep the audience apprised of his opinions on what’s happening in his life. Russell Crowe is open and entirely likable as the young man unlucky in love and a young gay man completely comfortable in his own skin. Within a year he’d be making films in America (a great debut in The Quick and the Dead) and within three years turning heads as the hair trigger tempered detective in L.A. Confidential which really put him on the map. John Polson isn’t quite as angst-ridden as he might have been playing the closeted Greg, especially freaked out by the easy-going, up front nature of Harry and Jeff’s free flowing camaraderie. Deborah Kennedy will break a few hearts with her too-quick-to-judge character Joyce though she seems to be the character who pays the biggest price for her hasty decisions.

The film has been framed at its theatrical aspect ratio of 1.85:1 and is presented in 1080p using the AVC codec. Sharpness is pleasing rather than razor-edged, and the image occasionally seems a bit darker than it needs to be. Contrast isn’t always consistently applied with some scenes seeming a bit milkier than others surrounding them. Color is rich, though, with skin tones which are quite saturated without quite going too far. There are occasional dust specks, but in the main the transfer is clear. The film has been divided into 8 chapters.

The DTS-HD Master Audio 2.0 stereo sound mix concentrates almost all of the sound to the center channel except for a gay pride parade sequence late in the film where the fronts are suddenly filled with disco music which accompanies the parade. Otherwise, dialogue has been recorded well (Aussie accents may require occasional subtitles for those not used to the dialect) and is never overpowered by the background music of Dave Faulkner or the atmospheric effects where appropriate.

Great performances by Jack Thompson and early career Russell Crowe distinguish the touching comedy-drama The Sum of Us. While the Blu-ray version won’t knock anyone socks off either visually or aurally, it’s a solid transfer that fans of the film will likely be happy to have.

Just after this was released here in Australia, Russell was looking to buy a new house for his parents and visited the house that my older friend Geof was selling in a Sydney suburb.
Geof, after just seeing this film, was well and truly smitten with Mr Crowe and although he did not buy, he spent a good few hours chatting to Geof over coffee.
Needless to say,it made Geof's day( or year)
That was really nice of him to do and that despite all the things you read about him, I hope he hasn't changed that much.
Reactions: Mark Walker

This was my introduction to Russel Crowe and the film made me a fan of his for life. He really is a talented and versatile actor (his singing in Les Mis notwithstanding).
Reactions: Mark Walker

This film has always been a favorite because it was not about a bunch of young guys in the city (There nothing wrong with that, but it has been done to death.); It is about a fella and his dad both wanting the other to be happy with their lives. Yes, we can make our chosen families when our biological ones prove to be toxic to our well-being as open LGBT folks, but it was great to see a film about a father and son where the biggest issue is that dad might be a bit too overeager to prove to his son he support him, which continues to be too rare for LGBT films.
Last edited: May 16, 2016
Reactions: Matt Hough

This film has always been a favorite because it was not about a bunch of young guys in the city (nothing wrong with that, but it has been done to death.) it is about a fella and his dad both wanting the other to be happy with their lives. Yes, we can make our chosen families when our biological ones prove to be toxic, but it was great to see a film about a father and son, which continues to be too rare for LGBT films.
Click to expand...

I could not agree more. The general lack of angst in the movie was so refreshing.
Reactions: Mark Walker and Jimbo64 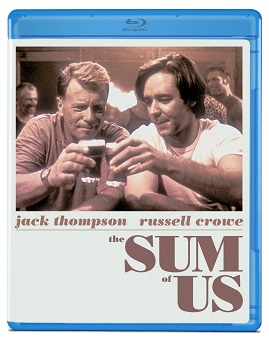